My ride-mates for the mountain route had all backed out. As an alternate I was thinking of jumping onto a long ride with the cycling club up there. It was going to be a great route, 62 miles and over 5,000 feet of climbing. It was starting early and I would have had to drive up first thing in the morning and find the place. Plus, I found out about an alternate local ride to Little Mountain, SC, which is an area I really wanted to check out. The clincher was when a friend emailed me Friday night pointing out the temperature difference at 10am for each location. They started at the same time, and the local ride was about 20 degrees warmer. I can handle cold weather rides, but I really dislike when the ride starts extremely cold and gets much warmer later. You have to layer up early and either drop layers later or just deal with them. Rather than mess with that, I did the local ride.

This was a perfect weekend for cycling. The weather was slightly cool as we left Dutch Fork Middle School, enough to keep my arm warmers on, but they were shed within the first hour. This is on the other side of town from where I live, so this was my first time riding in the area. I was thoroughly impressed. The roads were quiet and had a decent amount of ascents and descents. Little Mountain is more of a big hill than a mountain. The final climb was not too challenging given its name, maybe a short 6-8% grade and about 10% at the steepest. Overall the ride was almost 2,000 feet climbing after about 46 miles, which is not too bad. That cannot compare with the mountain course I was planning on climbing, but it was a decent alternative, and more importantly I had a good time riding with some people I know.

This was about as scenic as it got. Little Mountain gas station: 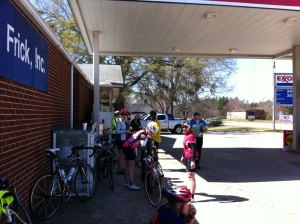 The ride back down was exhilarating, especially a stretch called Wash Lever Rd. It was gradual downhill at a slight grade, maybe 2%, but it was paved well and we had the wind at our backs for several miles. We probably averaged in the 21-22 mph range. There was also a very nice, albeit challenging downhill hairpin turn when we traveled through Peak, SC.

With my mountain plans in the can, I decided to make up for it with some intense fort training on Sunday. The focus was going to be on climbing and not riding fast. My goal was to get 3,000 feet climbed. I was more than halfway there and about to do the steepest hills (called ‘wall 1’ and ‘wall 2’) when I encountered a group from Cycle Center, where I bought my first bike. They asked me to join them for the remainder of the ride, which I politely declined because I was working on hills. They took off and I headed toward the wall, then immediately realized how boring riding solo can be. I also remembered that the Cycle Center would have some great beverages for me to refill my water bottles, and was only about 10 miles away. So I hammered to catch up with them, rode back to the shop, restocked my supplies and came back to the fort. It was a good 25 mile detour.

The intent upon my return was to go back to the two walls, which are at the back of the fort, about 15 miles from the gate. These were more miles than I had planned, but I had a goal, so why not? During this stretch, however, I began to get tired. After riding up Johnson Guard, which has a pretty big climb at the end, I decided to call it a day. If I had gone forward and conquered both walls, that would have left me at 75 miles or so, which was too much. Instead I turned around and ended up with about 2,800 feet climbed, just short of my goal, but far more miles than I intended.

This week will be quiet as I try to keep the legs fresh for the big Marquis de Sade ride over in the Blue Ridge Mountains next week. That is an 82 mile course which is 8,000 feet of climbing. I have already booked the hotel room so no backing out now.