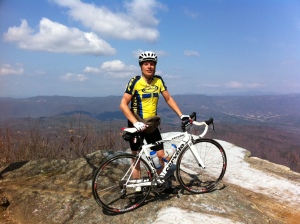 This was my first real ride in the mountains. Last year’s Tour de Leaves doesn’t really count since I did the “lite” version. Some friends and I had made a few half-handed attempts to get up to Saluda that didn’t work out. And this was no ordinary mountain ride. It is considered the toughest of all the Mitchell tune-ups.

Even though I had done some research, I really did not know what to expect other than it would be the most difficult ride of my life. My ultimate goal was simply to finish. After all the training over the last few months, I expected this would not be a problem. The other goals were to take the tough route each time (they had mild alternates to all the steep climbs), to not stop during the toughest hills, and no matter what to not walk my bike up any hills. While I did finish and go through the entire Marquis de Sade course, I failed on the latter two.

The morning was beautiful with a sunny forecast all day and a high around 80. Approximately 300 riders left North Greenville College at 8:30am. I started out slow, not wanting to push early and tire myself out. To my surprise, the course welcomed us with a big hill right away. At the beginning of the climb read the words “GRUNT” on the pavement followed by a smiley face. I could practically hear the Marquis laughing at me. The hill was intense and I saw many riders in front stop their bikes midway, a few of which turned around midway through the hill and opted for the grunt-free alternate.  For me, this was a wake-up call. I had to be on my toes to complete this course. At the steepest my Garmin was showing a 16% grade and I had to tackle it on cold legs.  I had to stand for most of the climb and my heart rate shot through the roof as I made it up the hill. I thought, they cannot all be like this, can they?

The first big climb was the Greenville Watershed, which was modest in comparison to what was to come. It was long and the grade ranged from 4-6%. I had an easy time with this one.  There was gorgeous scenery throughout the climb, so I simply enjoyed the nice and easy spin in the cool morning weather along the waterway.

With that one out of the way, I looked out for the menacing White Oak Mountain. After an exhilarating downhill on the other side of the watershed and some rolling hills, we rode into Tryon getting closer and closer to the big mountain. 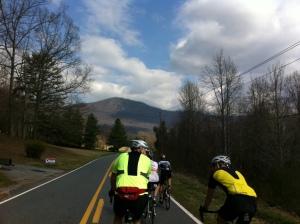 White Oak Mountain was everything I expected and more. It was, in a word, insane. The MapMyRide version I saw showed an 8% average grade. Don’t think so. According to my Garmin, it was more of a 10-12% grade with spikes of 15% scattered throughout. This beast continued for about 4.5 miles without letting up the entire time. Ouch, my quads said, along with other 4-letter words that will remain between me and the mountain. Fortunately I had a rider friend taunting me from above, yelling “C’mon Aaron!” occasionally. At times I wanted to chuck Clif bars at him, but it did help motivate me up the mountain. I made it up, but it beat me in it’s own way. I stopped more than a couple times to let my heart rate drop. I even walked the bike up a few sections. I reached the top, but probably walked about 1/5 of the entire climb.

Why did I partially fail? First, this mountain was simply too much for me to conquer without resting. I may never be able to do that. Second, I found myself less than hydrated because of some bad luck at the rest stop. My bottles were not sufficiently refilled and rather than drinking on the way up, I conserved and drank too little. Had I been hydrated I probably would have still needed to walk part of it, but the ride may not have been as punishing.

With White Oak out of the way, I felt pretty charged. This was the big one and any doubts about finishing were gone. I picked up the pace along the Green River Cove. The end of the road would be the last of the major climbs of the day. As expected, this one went a lot smoother. It was certainly no slouch, far from it, but anything would feel easier after White Oak. For me, the switchbacks were difficult to navigate. I found myself wanting to take the turns wide, getting in the other lane, but of course I had to be careful of the handful of cars that were also winding their way around the road. I still took a couple breaks and once walked the bike a smidge, but this time I did not have to. This hill was within my capabilities.

The ride back should have been nice and relaxing, especially down the Greenville Watershed, but mother nature had other plans. Rain came, lots of it. It followed us all the way to the watershed and down. We contemplated skipping the last major climb, Callahan Mountain, but as noted before, my plan was to finish the entire course. After about 20 miles in heavy rain, we got a little break, which I treated as a sprint the last few miles. This was a good test of the legs and they responded. I was able to keep at a fast pace throughout these rolling hills until we got back to the starting point.

This was a major accomplish for me and now I am certain that I will be able to conquer Mitchell.

Like Loading...
This entry was posted on Sunday, March 20th, 2011 at 11:50 am and posted in Climbs, Rides. You can follow any responses to this entry through the RSS 2.0 feed.
« Marquis de Sade Preview
Recovery Week »