Assault on the Carolinas 2011, Brevard, NC 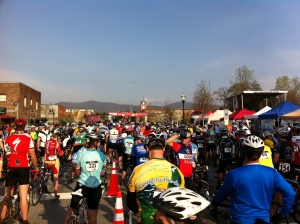 The Assault of the Carolinas is now the largest ride I have attended, eclipsing the Charleston ride last week. There were 600 pre-registered and who knows how many signed up the day of the race. There were probably just shy of a thousands riders out there. While there was a threat of some rain later in the day, the weather turned out to be great. If anything, it turned out to be on the warm side, especially later in the ride during the difficult climbs.

The city of Brevard, NC really pulled out all the stops and made this seem more like an event. They had some jammy music playing before we left and live bands as we returned. They had police directing traffic at all the major intersections, giving us two-wheeled adventurers the right of way. Best of all, they had pleasant, enthusiastic volunteers at the rest stops, letting us know what was coming up next. It was an impressive event and extremely well-organized. Hats off to Brevard and the ride coordinators for doing such a fantastic job!

My goal was to finish with my pride intact this time. The last mountain I attempted, White Oak, had put a chink in my armor. I made it up the mountain, but only after a struggle that included me walking for some small portions. I knew that Caesar’s Head would be a longer climb, just not nearly as steep. My goals were not too ambitious. I simply wanted to survive without stopping, walking or even unclipping my pedals for the entire distance between the bottom of the mountain and the state park above.

But first there was Walnut Hollow road. This little devil showed up early on, after about eight miles on the road when I had just barely warmed up. To be honest, this was the one I was worried about. There was a lot of murmuring before the ride and I had heard it was about 1.2 miles in length at a 12-15% grade. Fortunately my fears were overblown. It was steep in certain sections, especially right in the middle of the climb, but it was book-ended by more moderate climbs of about 8-10%. It was still no slouch and not easy to conquer, but not nearly as bad as I expected. I made it up to the top without too much of a struggle. If anything, it put me into a climbing frame of mind. 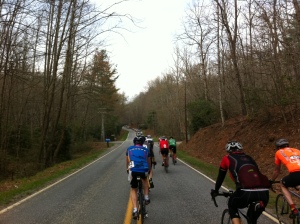 After Walnut Hollow there were some decent climbs. Nothing as big, but there were some prolonged 8% inclines that kept us honest and made us work. All that effort was worth it for the gorgeous descents that followed. These were not the scary, white-knuckle free falls like I experienced after White Oak Mountain. Instead they were gradual drops with long, winding turns and only a handful of corners that required slowing down. I took it easy on the descents, primarily coasting and enjoying the breathtaking scenery, not wanting to push it in unfamiliar country when I am not experienced with the terrain.

Then came Caesar’s Head, and with it came sunshine. In other words, it got hot and quick. It hit right as we were about to begin the road upward. The wicked sunshine was punishing and made for a brutal climb. I was pleased to see some cloud cover about two thirds of the way up to help cool off.

The path to the top of the mountain is seven miles, but the majority of the climbing is done in the last 5-6 miles. It was steadily an 8% grade on the way up, and then we had a little reprieve about halfway up where it leveled off and even went downhill for a short while, but that was not to continue. The last stretched seemed the toughest, and there were many sections that I pegged at a 10% grade or higher. 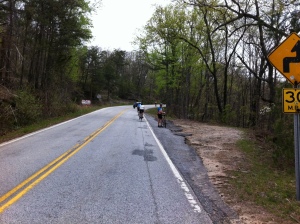 I was winded after mile one, wondering why in the world I had decided to try such a ride. A lot of people stopped at the side of the road; a few walked their bikes; some even went back downhill, apparently giving up. I kept chugging along, slowly but deliberately, making my way up each bend. Even though I started to feel my quads and hammies burning, they continued to spin and pull the rest of me up. The climb seemed to be endless, mile after mile, turn after turn. A number of times I looked up and saw sky, thinking I was finally about to reach the summit, only to turn the corner and find yet another set of hills. I expect these are the same types of tricks Mitchell will play on me in a few weeks. When I finally saw the sign for the top of the mountain, I felt energized. I even picked up the cadence for that last burst, so eager to complete the achievement and celebrate with cooler water.

Veni, vidi, vici. I made it up the hill and felt great. Not only had I beat Caesar’s Head, but I had not stopped. Even better, I don’t recall anyone passing me on the mountain, but I must have passed at least 50 people on the way up. While I cannot say I ‘felt great’ during this climb, I performed far above my expectations. It shows how far I have come in the past few weeks.

The remainder of the ride was mostly downhill and exhilarating. I spent most of this period solo and into a headwind. This slowed me down during the flats, but I didn’t care. This was nothing compared to what I had just undergone. Those last 17 miles until the finish line felt like a victory lap.

Like Loading...
This entry was posted on Sunday, April 10th, 2011 at 8:16 pm and posted in Climbs, Rides. You can follow any responses to this entry through the RSS 2.0 feed.
« Calm Before the Storm
Dog versus Man »