After my planned metric century was rained out yesterday, it was time to make up the miles this Sunday with a day-trip to Saluda. The weather was picture perfect, clear and just shy of 70 degrees. I somehow manipulated four others to join me and we had a little adventure. But first, let me back up a smidge.

After last week’s Assault on the Carolinas, I had another day in the hotel and an itch to do some more climbing. I put together some maps, got my gear together, and shoved off to Saluda, NC, which I have already visited on organized rides a couple times in the past. I wanted to get a little more riding in, while also surveying the area for next Sunday’s ride. I parked my car in the center of town and used that as a base where I could resupply as needed.

From Saluda, I went down and back up the Greenville Watershed, met a few other local riders along the way, but decided to go at my own pace. That was a mistake I would pay for later. After the Watershed, I took the Marquis de Sade route all the way to Pearson Falls. My plan was to take a left on Pearson Falls and take the short route into Saluda, where I would fill up my bottles, snack, and get back on the bike for more. To my surprise, I found that road was not paved. Rather than risk damaging my tires in the middle of nowhere, I considered other options. One way would be to go up Saluda Grade, which is a series of switchbacks, very much like Caesar’s Head, only not quite as long or as steep. At this point I was a wee bit winded, so I decided against that option. The next choice was to come back from where I had just come. Unfortunately my memory did not kick in and remind me that I had just descended that area at a rapid pace, nearly riding the breaks for certain sections. In other words, I made a dumb choice.

I took the route up Fork Creek Trail and paid for it dearly. It was steep, slow while I was tired and dehydrated. I got to West Fork Creek, which I knew was a shorter path to Saluda, but it was also steep. To make matters worse, there was another dog (not the same one discussed here) who gave chase while I was on a 15% incline. Fortunately there was enough distance for me to gun it up the hill and not meet up with the canine, but I pedaled extra fast and tired myself even further. Then, thinking I was almost to Saluda, I encountered that other dog. By the time I made it to the Saluda bakery , I had put some climbing mileage on my legs and needed a break.

The original plan was to go steeper. I wanted to do Saluda Grade, Green River Cove (previously done on Marquis de Sade) and if still feeling strong, Howard Gap. After wearing down my engine, I decided to leave it at the Grade. From the bakery I descended down 176, past Pearson Falls, about 4.5 miles until the terrain leveled out. From here I took the grade all the way up again. After Caesar’s Head the day before and my unplanned climbs early, this was tough. I made it up, but that was it for the day. All in all, a good day of riding.

So now we’re back to Sunday, today, which was awesome in every way. It was just a gorgeous, exhilarating spring ride.

This time we met at North Greenville University and took the Marquis de Sade route into Saluda. This means we had to hit a few grunt hills on the way to the Watershed, which were not easy by any stretch, but a lot easier this time than last.

The Watershed was again gorgeous. Of all the places I’ve been in the Blue Ridge area, this is by far my favorite. I would not call it a killer climb, but it is a nice, relaxing way to experience the outdoors. At 10am when the sun is just beginning to burn off the morning cold is by far the best time to experience the climb. After the Watershed we continued through the Mine Mountain and Pearson Falls descent. This time I learned from my mistake and did not reverse course and kill the group’s quads. Instead I just beat them up a little by taking the Saluda Grade the rest of the way. 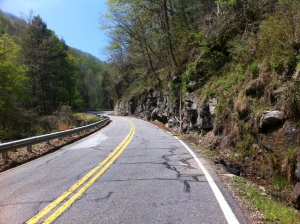 This time the grade was not too bad. What helped is I forgot that it really begins a couple miles down from Pearson Falls. I was thinking we had a good 4-5 miles up, which turned out to be closer to two. That was enough, so after lunch at the bakery, we headed back towards home base. We hitched back up with the Marquis de Sade route, which meant Callahan Mountain again. Ouch. Aside from that, it was smooth sailing and another productive mountain climbing day complete.

Even though we bypassed the big daddies, some of the climbs we did today were no joke and I struggled at times. Still, I can tell the training is paying off. If Marquis de Sade happened again today, I feel I could have shed another hour off my time. I was tired when I got back to the cars, but my legs were strong and I still could have handled a few more climbs. The more I can get out here to do this, the more ready I’ll be for Mitchell, which is now less than a month away.

Like Loading...
This entry was posted on Sunday, April 17th, 2011 at 6:35 pm and posted in Climbs, Rides. You can follow any responses to this entry through the RSS 2.0 feed.
« Dog versus Man
Final Phase »

4 responses to “Two Sundays in Saluda”