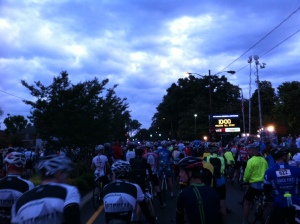 After months of training and preparation, the day finally arrived, my first attempt at the Assault on Mount Mitchell. Despite being new to the sport, I had trained well and was fairly confident of finishing strong. I had passed an earlier test and knew I could handle that amount of climbing, plus I had a detailed nutrition and fueling plan that had already worked well on other rides. Still, when looking at the elevation chart and hearing the horror stories of Highway 80 and Mount Mitchell State Park, I was not completely sure. On top of this, during the week prior to the ride, I found myself with a bit of left knee pain. This caused me to taper more than I had planned and I was concerned that that the pain could become worse when I reached the heavy climbing sections.

We left Spartanburg Auditorium in the early morning, under a cloudy sky with the threat of rain later in the afternoon. Not knowing how I would perform, I started right around the middle of the crowd and paced myself with the closest pack. There were some early mishaps, a couple crashes, some sudden stops, but it was mostly a painless beginning. My group kept at around 18-20 mph for the flat, early sections. I could have pushed harder, but I was fine with an easier ride to conserve energy for later.

The first challenge was Bill’s Hill, a short mile-long somewhat steep climb, which served as a good early way to test my legs and see how they responded. The knee had nagged a little in the early going, so I kept it conservative on the hill, spinning easily in my lowest gear. Afterward everything felt fine and I was able to pick up the pace a little bit. The group had separated after the hill, so most of my trip to Mt. Marion was either solo or with me in front.

I arrived at Mt. Marion in 4:15 and feeling good. This was towards the high end of my expectations. I was pleased with the result, but also knew I had room to push myself. At the Marion rest stop I consumed some fuel and caffeine, put on headphones, played my MP3 player, and kicked it into another gear. 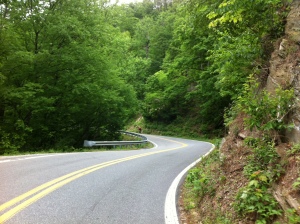 I knew that the early portion of Highway 80 was relatively fast before the steep climbing in the last few miles. Feeling great, I decided to ride the section aggressively. I picked up the pace and found myself passing a number of riders. My confidence continued through the tough switchbacks and I made it to the Blue Ridge Parkway still feeling strong, albeit a little tired. I knew that things were going well when I heard people talking about potential seven hour timeframes. At this point my competitive juices started flowing. I transitioned from thinking about completing the race to meeting a time benchmark. My goal at that point was to complete below eight hours, which seemed possible, likely even, from where I stood at the rest stop.

Things changed on the parkway. Unlike Highway 80’s switchbacks with varying grades, the Blue Ridge Parkway is just a steady, gradual incline that ranges from 6-8%, broken up only on a couple of occasions, one of which is a two-mile downhill. On the parkway I got into a grinding mentality. I let the gorgeous vistas and my music distract me as I simply moved the pedals and carried myself towards Mitchell. This climb should have been easier, but for some reason I slowed down and found a number of other riders passing me.

At some point the clouds gave way to a light, intermittent rain that was more of an annoyance than a hindrance. With a moderate temperature, I was not complaining. It could have been much worse. The rain had mostly stopped by the time I reached the downhill, which I approached conservatively because the road was wet and the temperature cold. I had heard often that the muscles tend to cool down during the downhill and cramps can set in. That wasn’t the case for me. Initially they felt stiff, but once I got them moving, I settled back into my upward grind. 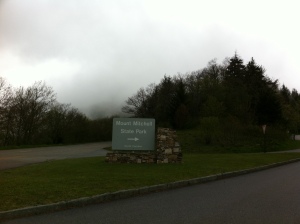 When I reached Mount Mitchell State Park, I knew I was almost there. Still pushing for a good time and finding myself adequately fueled, I skipped that rest stop and made my way towards the summit. As we climbed Mitchell, an enveloping, misty fog covered us. It gave the appearance and feeling of rain, but it was more of an ever-present mist. As we climbed further upward, the temperature dropped downward into the low 40s It was a wet, cold, not very pleasant feeling. The climbing is much tougher here compared to the parkway, so it became another, slightly more painful grind of hills ranging from 8-12%.

I kept plugging along and found myself noticeably tired. When the climb leveled off, I thought I was at the summit. I gave everything I had and sprinted to what I thought was the finish line, only to be met by another, steeper hill. This one hurt, but I persisted and made it up. I crossed the finish line in 8:05, tired, weather weary, disoriented, but mostly elated.

Like Loading...
This entry was posted on Tuesday, May 17th, 2011 at 6:21 pm and posted in Climbs, Rides. You can follow any responses to this entry through the RSS 2.0 feed.
« So Here We Are
Mount Mitchell Photo Journal »