Challenge of the Centuries, 2011, Day One, Hartwell, GA 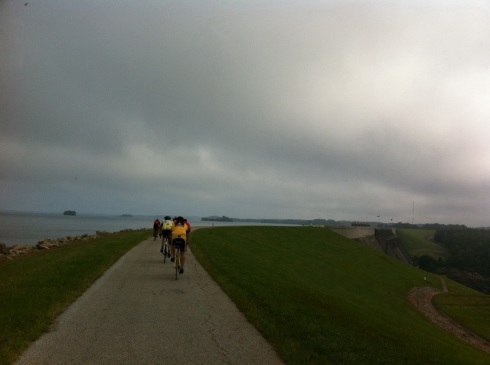 Today was day one of the weekend century rides. We began in the city of Hartwell, GA, just south of Lake Hartwell. We would skirt the lake, ride over the dam, and then do a large southern loop that would carry us near Abbeville, SC, then back to Georgia via Lake Russell.

For the first leg of a double century, this ride was just about perfect. It was not terribly hilly; there were some rollers, but not many with steep grades over 5-6%. I found myself in the bigger chainring most of the ride. The best thing was the traffic. There simply wasn’t any. Even the four lane highway we took near Lake Russell had only a handful of cars, and we had a nice shoulder that worked as a bike lane. It was a comfortable, fun ride without a lot of looking over the shoulder.

The high point of the ride was going over Hartwell Dam. From what I understand, they do not usually allow bicycles to ride over. A sheriff stood guard at the entrance, checking to make sure only registered riders got through. Even though the weather was overcast at the time, the view was terrific. It also had a nice bike trail shortly before and after the dam. The entire bypass was a pleasant three miles. 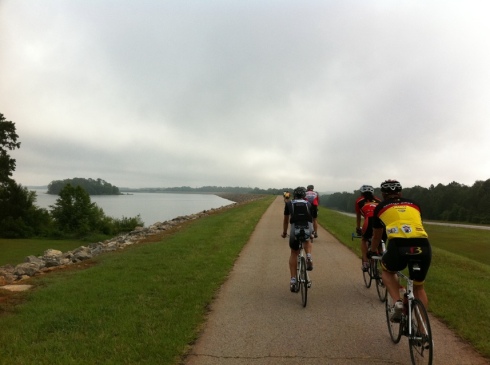 Even though I enjoyed the ride, I had trouble on this one. My major error was in reading a marker incorrectly and veering off course for several miles. As I was traveling down this country road, I noticed it odd that I had not encountered other riders in awhile. After reviewing the cue sheet, I somehow convinced myself I was going the right way. Finally I broke down and used GPS for what should have been the next turn. To my disappointment, it was six miles the other way. In total, I added about 9-10 miles to the ride. While it was frustrating, it wasn’t the first time I got lost, and certainly won’t be the last.

You can see where I got lost in the GPS map below. I was almost to Iva, SC before turning around, wherever that is. 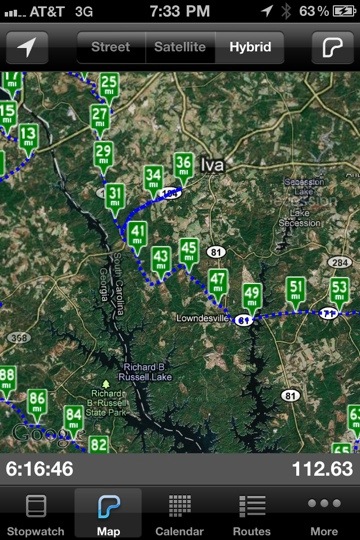 By the time I got back to other riders, I was well behind. The first thirty miles went fast because I was able to draft with a pack. The last 80 would be slow because all the riders at my pace level were ten miles ahead of me. I hunkered down, found a pace that would keep me fresh for tomorrow, and I kept going.

Riding by myself is not a problem, but today it was tough because every mile seemed to have a headwind. This eventually tired me out. My average speed before the wrong turn was about 20 mph, but it gradually dropped and my heart rate went up when riding solo. Fortunately the weather was overcast until the last rest stop. Afterward the sun came out in full force, but the hard part of the ride was over. I fought it off and made it to a nearly empty parking lot unscathed.

Even though the ride was taxing, I recovered well and feel strong for tomorrow. It will not have the amount of rolling hills, but there will be a steep climb up Dick’s Hill in Toccoa.