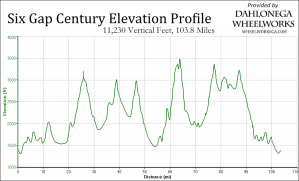 After the dust settled from Mitchell, I decided to continue riding, but could not settle on a suitable challenge. The problem was, there were a number of rides I wanted to do in September, but most were within a week or two of each other. I had already registered for a double century on the MS Ride towards the end of the month, which got in the way of all my plans. Finally I decided to transfer my registration to a friend and that freed my calendar.

With my September now free, I had to choose between Hilly Hellacious, Bridge to Bridge, and Six Gap Century. The first two are a closer drive, but Six Gap looks to be the toughest. The clincher was when a friend told me that by doing Six Gap, I would be completing the trifecta of difficult Southeast rides — Mitchell, Cashiers, Six Gap.

Six Gap it is.

As you can see on the above elevation chart and infer from the name, Six Gap has six steep climbs. The entire route is 100 miles with 11,000 feet of climbing, which is comparable to Mitchell, but they are spread out into big challenging sections. The toughest is Hogpen Gap, which is seven miles of steep climbing. The word is that this is more difficult than Mitchell and Cashiers. The ride looks more similar to Cashiers since there are a number of fast descents, so I’ll expect a similar experience.

Since I am already in climbing shape, the focus over the next few months will just be to continue in that direction. I will keep doing the mountain rides, although not quite as many. The hope is I can do one, maybe two each month, while doing some local hill and interval training.
These past few weeks I have abandoned the training diet, and gained a few pounds as a result, but that will change in the next month or two. Hopefully I’ll be a little lighter for Six Gap.

This weekend we are heading out to Saluda for a Bed and Breakfast vacation. While there I’ll be participating in the Fletcher Flyer ride on Sunday, and checking out some of the climbs in the area. I may try to conquer White Oak Mountain again and will check out Howard Gap and Hogback Mountain.

Like Loading...
This entry was posted on Friday, June 3rd, 2011 at 9:17 am and posted in Blog. You can follow any responses to this entry through the RSS 2.0 feed.
« Challenge of the Centuries, 2011, Day Two, Hartwell, GA
Green River Cove, Revisited »

3 responses to “Next Challenge”