After descending Devil’s Fork across the Tennessee state line, having released my demons, I felt almost like a brand new rider. I may not have been as strong as the first mile, but I had some climbing legs in me. I continued forward alone at a decent pace without pushing too hard. A big climb was coming, Sam’s Gap, that I had heard went on for six to seven miles. My expectation was that it would be similar to Caesar’s Head, maybe not quite as tough. I was ready for it.

To my surprise, I caught up with a familiar face. Since I had spent so long at the rest stop, she should have been way ahead of me. I came up on her a lot faster than I should have and looked over to see anguish on her face. She was cramping badly and could barely push the pedals forward. She kept going, albeit slowly and I rode alongside. The worst of her cramping was in the hamstrings, but the pain was spread throughout her body. She was afraid to get off the bike because it might be too painful to get back on. It was a tough today and she was on the verge of giving up.

At one point we stopped. She was ready to cave in and wait for the support vehicle to take her home. I happened to know that another rider was just picked up at the last rest stop, and didn’t expect to see another vehicle for quite awhile. The stop was only momentary. She told me many times to go ahead and finish the ride without her. She would wait for the wagon. We were in the middle of nowhere, in 90+ degree heat and she was cramping badly. There was no way I was going to leave her. When she realized how futile it was just to stand on the side of the road, she suggested we get back on and go real slow. I was fine with that. We continued at maybe 7-8 mph as she struggled. At one point I realized I had three electrolyte pills. She took all three and we went forward slowly.

Her strength recovered a little bit as we moved along. She ruled out the SAG wagon, which I was a relief to me. I had only known this person for a couple of weeks, but could tell she was a tenacious, tough rider, and it would be a major disappointment for her to abandon the ride. She later told me that she had 100% success rate on these tough rides, so it would have been a major disappointment if she had given up.

The big concern was with the last lengthy climb. We pedaled and talked quite a bit. I can be a bit chatty, maybe too much sometimes, but this time I pushed it into overdrive. I recalled an experience when I was ‘bonking’ and someone else talked me through the ride. That helped a great deal, so I tried to do the same for her. We talked about all sorts of things. I tried to tell some inspiring or funny stories (or maybe boring). I just wanted to distract her from the agony and frustration she was going through.

She made progress in the flats and we were maybe in the 12-14 mph range, but I was seriously worried about Sam’s Gap. A lengthy climb might have been too much for her, even though she was doing better than when I first ran into her. Looking at my odometer compared to the cue sheet, I discovered that we were on the climb already. It was just a slight grade in the beginning for a couple miles and we barely noticed we were going up. We kept talking and pedaling, slowly making our way closer to the tougher stretch, while trying not to think about it.

When the climb turned up, it was not bad. At most it was 8% and most of the time it was around 5-6%. It was not bad at all. It just went on for a very long time. We took it nice and easy, continued talking and enjoying the scenery. What was cool was that the top of the climb runs parallel to Interstate 26. It was a joy to get to the top and see not only the Sam’s Gap elevation sign, but also the NC state line. I caught a picture of my travel companion at the top of the mountain, and she had a beaming smile. That was quite a contrast from the expression on her face a mere 10 miles earlier. I was very impressed that she soldiered on and made it. In the same situation, I may have given up.

There were a couple short hills remaining. A couple of them were challenging, but nothing like we had already encountered. Finally we arrived at the big descent. We were greeted by the sign warning truckers of an upcoming 9% grade. That was music to our eyes. We ducked down and let fly for two, maybe three miles. After climbing in the heat, nothing felt better than descending with the wind in our face.

After a couple more grunts, we were back at Mars Hill College. Finish time was 7:42 — not too shabby given some of the difficulties we faced out there.

Aside from all that happened, this was a wonderful ride and I cannot wait to do it again. This was easily the most efficiently organized big ride I have attended. The rest stops were perfect. I cannot thank the volunteers enough for doing everything they could to accommodate us. The road markings were perhaps the best I have seen on a ride. There was no confusion on where to turn, which is impressive considering how I can get lost crossing the street. The city of Mars Hill really turned out, supported us, and made this seem like a major event. Thanks to everyone involved. See you next year. 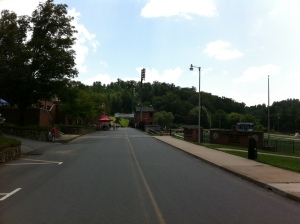 Like Loading...
This entry was posted on Tuesday, July 12th, 2011 at 4:34 pm and tagged with bonking, cycling, mars hill, mountains, teamwork and posted in Climbs, Rides. You can follow any responses to this entry through the RSS 2.0 feed.
« Hot Doggett 100, 2011, Mars Hill, NC
Surprisingly Strong »