Alone in the Fort 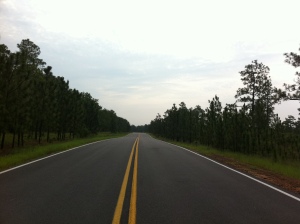 Even though it wasn’t planned, this was a quiet week for me. With around two weeks to go before my first big mountain ride of the season, the plan was to amp up the training and punish myself a little bit. I had this and next week before the taper began, so I wanted to make everything count. Things didn’t quite work out that way, which turned out to be a good thing.

Flash back to Tuesday. I arrived at my group ride with a cleaned and re-fitted bike. It was another brutally hot day, 103 degrees I believe. If it were another ride, I might have considered shoving off, but this is one I particularly enjoy. We barely got going when I started to have problems. For some reason I wasn’t able to downshift. I kept trying and trying, but all I could do was shift into a higher, harder gear. Finally I got to the top gear and and that was the end of the road. I could no longer shift the bike and had to abandon the ride after two miles.

Turns out my shifter was completely broken. The good news is that it was under warranty, so a replacement was free. The bad news was that it had to be shipped and wouldn’t arrive until late Friday, so I wouldn’t get the bike back until Saturday at the earliest.

I spent the days wisely by doing absolutely nothing. I watched a couple extra movies, got caught up on my DVR queue, caught up on the news, etc. The temperatures were still insanely hot, so I didn’t exactly miss being outside. As the weekend approached, however, I started to get antsy. Despite having some plans on Saturday, I had to squeeze a short ride in.

I got the bike back on Saturday morning and it was a thing of beauty. Not only did they replace the shifters, they were upgraded. When I got back on the bike, I could tell that shifting was a lot smoother. The bike shop apparently had done a few other things as the ride felt better than it had in months. I guess my favorite mechanics must have either gotten bored or taken pity on me. Either way, I wasn’t complaining.

The Saturday ride was just a quick loop around the fort. I didn’t have time for much else. It was enough of a ride to see where the bike and the rider stood. I was surprisingly fresh. The recovery days must have done me some good, because I was flying at spots where I would usually struggle. I also got lucky with the weather. It was the middle of the day, but the sky was overcast and the temperature stayed below 90 degrees.

Sunday was the true test. I finally had some time in the morning and decided to again go out solo to the fort and see what I’m made of. This was the first weekend I didn’t participate in a group ride, so this was a different experience riding solo again. I was able to ride at my pace without worrying about catching anyone or letting them keep up. A big storm had come through the night before, so again, the temperatures were perfect. It was sunny, but not very warm.

I did the four corners route again. This is a highly challenging route that works in all of the toughest hills in the fort. Usually it is around 45 miles with 2,000 feet of climbing. The climbs are usually steep so it is a great workout. I felt great from the beginning and decided to try to keep pushing myself. I hardly stopped. When I needed food, I just unwrapped it and kept on going. I was also going a lot faster than I would usually. When all was done, I averaged just under 17.8, which is amazing for me on this route of the fort. I cannot upload the Garmin file to Strava because of some computer problems, but my guess is that I set a lot of personal records today.

People have been telling me for months that recovery is just as important as training. I thought I was listening, because I was taking a few days here and there. Apparently not. I’m not concerned with missing valuable training time. I have another week and this is more of a training ride. My hope is to peak at Bridge to Bride in September. Will have to make sure to take more recovery days in between.

Like Loading...
This entry was posted on Sunday, August 7th, 2011 at 5:54 pm and posted in Recovery, Training. You can follow any responses to this entry through the RSS 2.0 feed.
« Midmorning on Paris Mountain
Spinning in the Rain »

2 responses to “Alone in the Fort”