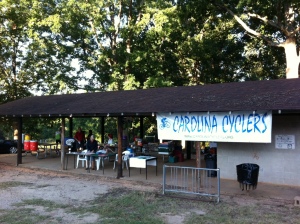 On Saturday, September 10th, I got a different perspective of a large, organized ride. The Assault on Little Mountain is hosted by Carolina Cyclers, of which I am a member and active participant. With just over a week until my Bridge to Bridge ride, I wasn’t crazy about riding an intense century. It would be fine, but I tend to push myself to perform. I didn’t want to go too hard and not get a chance to fully recover. I also wanted to help put on a great ride. So I stayed off the road (mostly) and volunteered for the day.

It was a different experience and gave me a lot of respect for volunteers. It is a major undertaking to run something like this and they are not always recognized. The Carolina Cyclers volunteers are really tremendous and I had a good time helping them out.

The toughest part was watching so many cyclists have such a great time on the roads, many of which are friends that I ride with regularly. It didn’t help that I have never participated in this ride, and from what I hear it really is a nice route. I was itchy to get on my bike and had the opportunity to do so after most of the metric century riders had completed the route. The problem was, I forgot my cycling clothes and live about an hour away. 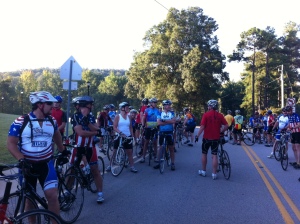 This course is divided into four loops, all of which end up back at Reunion Park in downtown Little Mountain. If I had bike shorts, I would have tried one or two of the longer loops and maybe even managed to do a metric century. I was hesitant whether to ride at all without shorts, but decided to give the shortest loop a shot. This was a quick, 11-mile loop that is the finish for the century riders.

Riding without shorts is NOT fun. I stood up a lot, but it is not easy to ride standing up the whole way. At some points I had to rest. During the downhills I tried to balance my butt on the seat and coast. During the uphills I would either stand up in a high gear or sit down carefully and spin my way up.

This loop starts out mostly downhill and ends up with considerable climbing back up Parr Rd. Despite doing everything in my power to keep my bottom comfortable, it was getting a little raw during the climbs. When the eleven miles were finished, I was done. Anything more would have started causing some serious pain down there. It was worth it to get a short ride in, and everyone I talked to was absolutely correct – it was a great route and worth doing, even for just a short while. Next year I’ll make it a point to tackle this one on the bike.

With a week until Bridge to Bridge, I will keep resting while getting out for short, easy rides in order to keep the legs fresh. I’ll try to get around 30-40 miles today and ride easy on the Tuesday and Thursday group rides. That will probably be it for me. This is a lighter taper than I did for Mitchell or other rides, but I think it will help me next week. 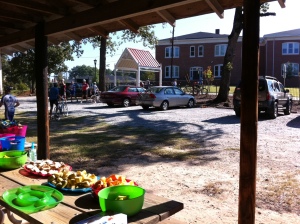 Like Loading...
This entry was posted on Sunday, September 11th, 2011 at 7:40 am and posted in Rides. You can follow any responses to this entry through the RSS 2.0 feed.
« Joyride / Cycle for the Summit
Bridge to Bridge Preview »