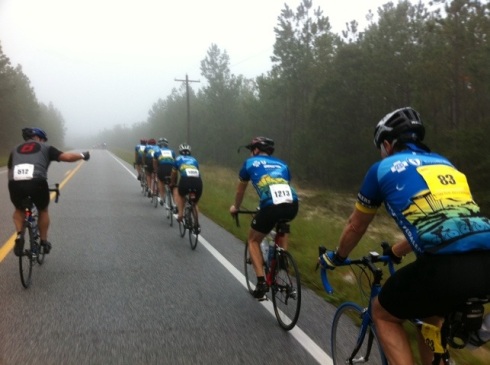 Peter Wilborn’s article has been circulating around the cycling blogosphere about the ‘Lost Art of the Group Ride.’ It is a good read, highly recommended and he makes some great points. I am certainly guilty of some of the behavior that Peter describes. Somedays I have one speed — as fast as my legs will take me. Sometimes it takes a lot of work for me to try and ride at everyone else’s pace.

Which brings me to the MS Ride, the first day of a double century for a great cause. I rode with team Perez Pedalers and it really was a team effort the whole way. Peter Wilborn would be proud. Eight riders took turns at the front, shifting every 2-3 minutes or so if circumstances allowed. The focus was on riding together through the good times and bad. That meant that if someone had a mechanical issue, we would wait. If someone could not keep a pace, we would slow down.

We were a well-oiled machine today and this ended up being my easiest century ride ever.

We started bright and early in Camden, SC. We just missed a storm when the ride began, but it would find us later. After maintaining a steady pace for the first dozen miles and getting over a flat tire, we started feeling some raindrops. They started coming down harder at our first rest stop, about 30 miles in. Once back on the road, it really started coming down. We tried to ride through it and succeeded for awhile, until it was finally enough.

The rainfall became torrential and we pulled to the side of the road to wait it out. We borrowed the front porch of an empty building and sat there maybe ten minutes before it lightened up. It was still raining, but was no longer dangerous. We rode as well as we could, getting drenched in the process.

It was just a small storm system and we thought we would pass it soon. At that time of the century route, we made a little loop while the shorter route went straight through. This meant that we kept on turning into the storm even though we could see clear skies in the other direction. It was frustrating to think we would escape, only to be turned right back into the mess. In total, we ended up riding in it for around two hours. Fortunately once we were out, we were out. It would be sunny skies the rest of the way.

At 66 miles we had lunch and almost everyone felt great. The paceline was working just as we had hoped. There was one person who was starting to wear, and was worried that she was slowing us down. She even suggested going with another, slower group. Not a chance. We wouldn’t even entertain the idea. We started together and would finish together. As it turned out, this person found her rhythm in the second half and finished strong.

The group continued to glide together, but a few people were wearing down a bit. As we got closer to Florence, SC, a couple hills were in our way and that mixed up the cadence. A few people had never been on a ride this long and they were getting tired. I felt great so decided to take one for the team. I decided to take a long pull, which ended up being around seven miles. One of the riders said he was getting tired at 18 mph, so I tried to stay below. To my surprise, people were saying that was too slow. I kicked it up to 20 mph and stayed there for most of the pull.

We finished strong, and more importantly, we finished together. We shared BBQ, beer and laughter afterward.

Tomorrow will be another 100 for me without the pack. Depending how I feel, I might go for speed. Since the course is flat, I should be able to manage 20 mph the entire way. We will see.