Having arrived in Spartanburg just the night before, I was bleary-eyed in the early morning when preparing for the longest ride of my life. It was 4:30 AM when I arrived at the Ingles at South Pine and Country Club Road in Spartanburg. My loving wife dropped me off and would meet me on the other side of the ride, the sunny beach of Isle of Palms, Charleston, almost 240 miles away.

The weather was cool and clear under the cover of darkness. With a few hours until sunrise, I knew it would get even colder still. I bundled up, turned on my lights, and joined my fellow riders as we embarked on a day-long adventure.

The event was hosted by the Spartanburg Freewheelers, who I have found have a knack for this sort of thing. Madeline in particular spent weeks, months even, poring over details to make sure the route was possible, safe, and of course fun. She also reserved a beach house where we could relax at the end of the ride. Her endeavors really worked as everything went as well as possible. There were no flat tires, no delays, no mechanical issues, no significant physical issues, and most importantly no drop-outs. We all rode together, stayed together, and finished together. We had the best weather imaginable for such a ride — sunny skies all day with a high around 75 degrees. The ride was next to perfect.

We were sixteen riders followed by two SAG vehicles with food and equipment. We would retool and refuel roughly every 25 miles, give or take, and designated rest stops. Craig and Liz did an amazing job supporting us. They were where we needed them every time.

We rode under the stars and through the rolling hills out of Spartanburg to Chester, SC. Aside from some easy practice runs, this was my first real night ride. Frankly, this was the part that worried me more than anything. Aside from a couple wobbly moments, everything went fine. We were annoyingly visible and traffic was scarce. Nothing to worry about. At one point a police officer coming toward us pulled over to the side road. Even though I couldn’t see his face, I know he was trying to process what he had seen and whether to take action. After realizing we were not space aliens or Tron, he moved along.

In Chester we had our first designated rest stop — McDonalds. As a generally healthy individual, I tend to avoid Mickey Dees. Thanks Morgan Spurlock. This time I wasn’t concerned in the least. I almost swallowed my Egg McMuffin and Hash Browns whole and they were absolutely delicious.

The next area would prove to be the most difficult. With approximately 70 miles on our legs already, we crossed the Catawba River near the Fishing Creek Reservoir and rode down the backside of Lake Wateree. The Wateree hills are famous in Columbia, but unexpected and surprising to our upstate friends. There were a few occasions where we had to slow the pace in order to let people catch up. We had fun with it and a number of people started mocking the “Easy!” yells. When we reached the end of the hills, the chants were unintelligible grunts usually followed by laughter. 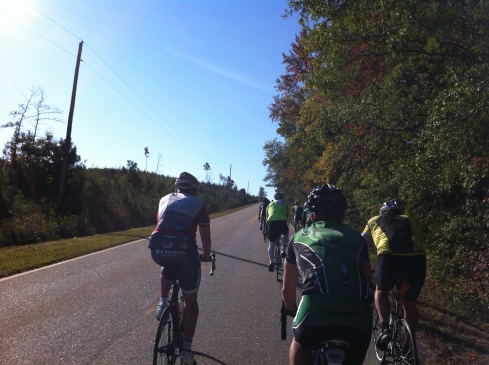 Climbing the backside of Lake Wateree

When we arrived in Camden, the major climbing was thankfully finished. We had accumulated about 4,500 feet to that point, and there would be less than 1,000 feet to climb the rest of the way. Our lunch stop was Camden Revolutionary War Park, where we could relax on picnic tables with good food before getting back on the road.

From here on, the route took us south to Charleston avoiding major traffic sections. The weather report had warned of heavy winds, and they were out there, but heading West and were seldom in our face. At worst we had to deal with a tough crosswind, which although a nuisance, did not hold us up. In some areas we had a bit of a tailwind and were able to push the pace. After skirting Sumter and passing through Manning, we kicked it into high gear. We must have averaged close to 23-24 mph on Highway 52 as we approached the Francis Marion National Forest. We had our biggest horses up front, mostly Wade, Brian, Clint and Steve who kept pulling us through. At one point Karl and I had a turn at pulling and found ourselves huffing and puffing to keep the pace. My ego had no problem being a passenger here.

It was late afternoon when we hit the forest. We were making great time, but daylight was running out and we would soon be riding through the night again. We kept up a good pace as we headed due south, but here we were merely slugging it out. The forest seemed to go on forever, probably around 40 miles, as day turned to night. This was the most monotonous part of the ride. We kept soldiering on, watching the miles tick away. 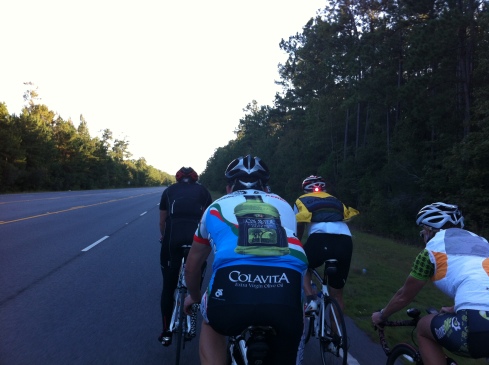 Eventually the greenery gave way to darkness. We kept on and eventually crossed over a bridge into the Mount Pleasant area. It was a great feeling when we crossed over the Wando River. We could not see the water, but we could smell it. The salty air told us that the beach was close.

The last hurrah was a mini-climb over the bridge of the Isle of Palms connector. This part was a little hairy with traffic. We stayed in the shoulder and pushed our way up. I had been told that this was a relatively steep climb, but it really was not bad. It might have seemed easier in the darkness. After descending the bridge and regrouping, we rolled through the streets of Isle of Palms to the beach house where we were welcomed by a chorus of applause.

When the riding ended, the partying began. As Lloyd from ‘Dumb and Dumber’ might say, the beach house was a place where ‘beer flowed like wine.’ We celebrated our accomplishment in style.

My Strava link (7 miles missing because I forgot to turn it back on after Camden)
Newspaper article about our ride.

Like Loading...
This entry was posted on Sunday, October 16th, 2011 at 8:03 pm and tagged with beach ride, charleston, cycling, endurance, freewheelers, isle of palms, spartanburg and posted in Rides. You can follow any responses to this entry through the RSS 2.0 feed.
« Spartanburg-Charleston Beach Ride Preview
Looking Ahead … »