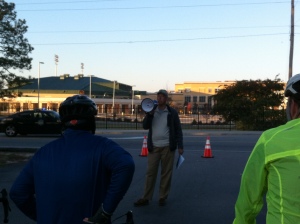 There was only one ride planned this weekend. I was aware of the Spring Valley Presbyterian Church ride and hated to miss it, but knew that after my Beach journey, I would probably be too tired. Rather than commit to something I couldn’t handle, weeks ago I offered my services as a volunteer. After getting everyone together, Ride Coordinator Tim Bostick decided to place me at a key intersection to direct traffic. This is a turn that comes fast early on in the ride. We missed the turn during the Ride2Recovery a few weeks back and inadvertently added some extra miles.

Great. That’s about as easy a job as one could get. The thing is, I absolutely loved the Ride2Recovery a few weeks ago, and this was the exact same course. Even though it was against my better judgment to ride, I still had that itch. This also happened to be one of my first organized rides last year. I chose the 62-mile route, which was my longest ride at that time. I remember it fondly and had a desire to reconquer the ride.

I lucked out when John Quinn dug up a Carolina Cycler’s sign that would work perfectly at the intersection. That sign combined with a pre-ride warning from Tim would effectively eliminate my position. John mentioned it to me late in the day and Tim sent me a Facebook message much later at night. My spot was covered. I could ride. Thanks John and Tim!

For the R2R, I started the ride out in front. With another cold morning, this time I decided to lay back and get myself warmed up before pushing too hard. A fast lead pack emerged and I thought about going after them. That thought quickly went away. I bit my lip and let them go. Good thing because I would have just been chewed up and dropped a few miles down the road. I found out later that this spirited lead pack would finish the hilly course in under 3.5 hours. No thanks.

Unlike the last ride where we pretty much rode as a pack the entire day, this one was more fragmented. The first pack I rode with was around five riders, but we would split apart on the hills. Some guys would go up faster, others would go down faster. There wasn’t a whole lot of regrouping or drafting. This worked for me because I didn’t quite have my normal ability after yesterday’s ride and remnants of the Beach Ride.

The second pack that I fell in with was Vince, who I know well, and a number of Army riders. It was pretty much the same with them. They would ride together on the downhills and flats and then split up on the hills. Vince and I ended up passing them on the hills and rode together for much of the way.

I was still undecided on which route to take. Part of me wanted to turn my chips in, eat lasagna and watch some football. The other part of me, the crazy part, wanted me to keep going and not stop. When we got to the Lake Road turnoff, the crazy part won out. We turned left and enjoyed the scenic extension. 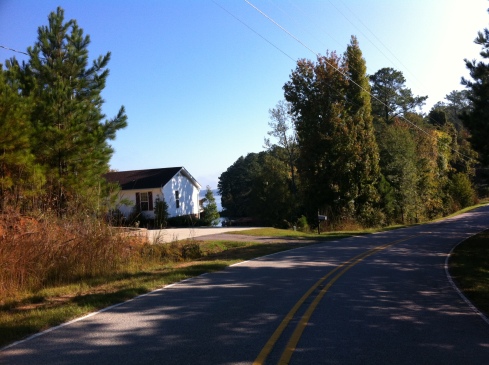 Lake Road was even prettier this time thanks to the Fall colors. The temperature finally warmed up to the mid-50s, which made for a comfortable ride. There are a few little hills, some of which are short and steep, but overall it is a smooth, relaxing ride. The last time we went through it quickly. This time Vince and I took a more relaxed pace. We enjoyed the scenery and talked our way through it.

I knew what was to come after we left the Wateree shores – climbing and lots of it. Knowing the course turned out to make a big difference. I was ready for the longer climb this time and gradually spun up it. The rolling hills were still brutal, but I was able to anticipate the steepest sections and pass them without issue. 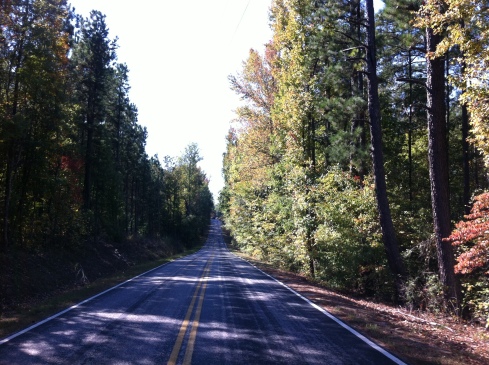 Rolling Hills Out of Wateree

At the last rest stop, Vince and I caught the remains of the other pack. Everyone was there except for Richard, who had taken the shorter path. There was still some separation on the hills, just like before. As we got closer to Columbia, we decided to ride together in order to be safer in traffic. A Sunday afternoon near Sandhills can be hairy, so that worked out well. The last gasp was Lake Carolina and The Summit. Despite a few more tough hills, the group stayed together. One of the guys with us had been riding for only a month — most impressive! 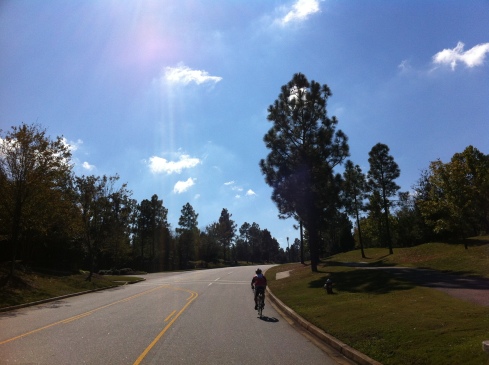 I had a great time. It was a different type of ride because of the relaxed pace. When I got to the finish line, I enjoyed the delicious lasagna and baked bread without feeling like I had been beaten to a pulp. That’s a nice change.

Thanks to Tim, John, Doug and all the volunteers!

Like Loading...
This entry was posted on Sunday, October 23rd, 2011 at 6:45 pm and tagged with columbia, cycling, habitat for humanity, wateree and posted in Rides. You can follow any responses to this entry through the RSS 2.0 feed.
« Carolina C.O.P.S. A Ride to Remember, 2011, Columbia SC
Tour de Franklin Preview »

One response to “SVPC Habitat for Humanity Ride, 2011, Columbia SC”