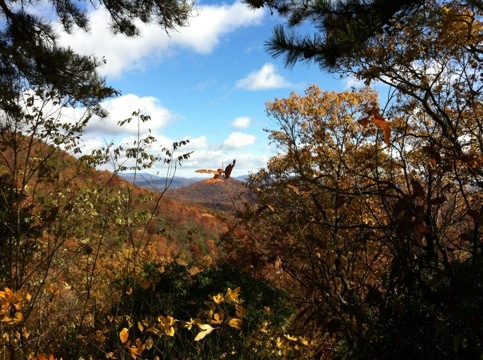 Today was my travel day. I left early enough that I had plenty of time to get to Franklin. As I sped down the freeway and crossed the state line into North Carolina, I was practically hypnotized by the Fall colors. Rather than speed through the mountains, I decided then to take some time and make an adventure of it.

The adventure started by stopping in Saluda for lunch at the bakery. Of course I have made this stop many times, but seldom off the bike. As I ate my sandwich, I watched other cyclers struggle their way to the counter. The one thing they had in common was they were freezing, looking for warm beverage. Yeah, I know how that goes.

This was also a reminder that I’m a cold wuss, and feared that I was underprepared. The next stop — REI, where I picked up a couple other layers and a nice, heavy windbreaker jacket. While this was an impulse buy, it’s something I’ll need if I plan to ride over the winter.

The adventure really began as I approached Asheville. I’ve travelled highway 74 more times than I can count now. It was too beautiful of a day for the ordinary route. I took an early exit and hopped onto the Blue Ridge Parkway. 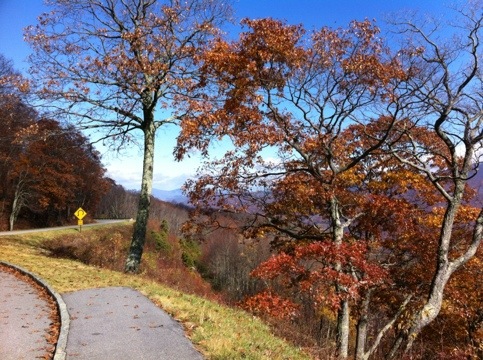 The drive was heavenly. I stopped at a couple overlooks to breathe in the scenery. I kept going, admiring the golden yellows, ruby reds and pumpkin oranges that highlighted the mountains above and below.

After traveling a couple dozen miles, I passed through the Devil’s Courthouse and immediately recognized familiar territory. This was the same route I had taken in the Blue Ridge Breakaway ride. It was cool to revisit the same climbs and descents and see how they look with color. I passed by the Richland Balsam overlook, the highest point of the parkway, and began the 11-mile descent. Needless to say, it wasn’t nearly as breathtaking in the car, pretty colors or not, but it was still cool to revisit the area. The blind tunnel seemed to go on forever. No wonder I struggled so much. I passed the stretch where the mother bear and cubs had been last time. They were probably somewhere warmer today.

It was tempting to climb up to Waterrock Knob, but I knew I had to grab my packet in Franklin and pick up my brother in Sylva. We grabbed some dinner and still had some daylight left. At first we drove around the mountains just to talk.

As we kept going, we came closer to the Blue Ridge Parkway. Why not? We got back on and climbed the 10 miles to the top. When I told him I had taken my bike up here, he said I must be some sort of masochist. Yeah, something like that. When we got to the top it was below freezing. At first it didn’t feel too bad. We watched the sun set as long as we could stand it. The cold caught up quickly. My brother was wearing shorts, so he was done.

I wanted to take the short hike to the top. My brother waited in the car. I’ll be back in two hours, I joked. It was a quarter mile to the overlook and half mile to the peak. The walking trail was quite the climb. It is hard to estimate on foot, but my guess is 20%. Soon I found myself breathing heavily and getting colder. The sun was dropping and I didn’t want to hike back down with it much darker, so I cut my losses at the overlook. The peak will have to wait. I sprinted down the hill, not really by choice. Probably have some lactic acid stored thanks to this jaunt. 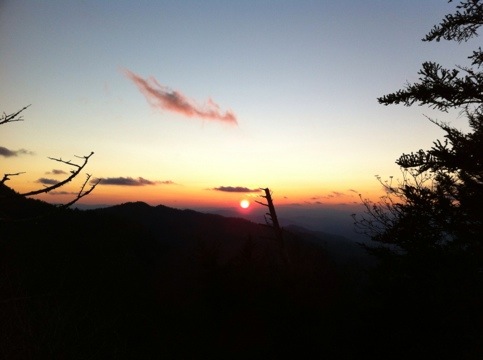 It was a fun adventure, a nice prelude to tomorrow where I’ll be spending more time out in nature.

Like Loading...
This entry was posted on Saturday, October 29th, 2011 at 9:15 pm and tagged with blue ridge parkway, road trip, Saluda and posted in Blog. You can follow any responses to this entry through the RSS 2.0 feed.
« Tour de Franklin Preview
Tour de Franklin, 2011, Franklin, NC »