It has been a terrific year, far surpassing my expectations and goals. I started the year as a cycling novice. In fact, the first name of this blog was actually ‘Cycle Rookie.’ I was training for something that seemed extraordinarily ambitious for a cyclist of my limited experience, The Assault on Mount Mitchell. A number of people even tried to talk me out of it.

Not only was the event literally a steep climb, but it was also a figurative steep climb for me to get myself into training shape. The latter was the more of the reason for what became my blog name, although the name became more fitting in time. It just so happened that during my training for this event, I discovered a passion for something in myself. I have always enjoyed both being out in nature and also physical exercise. Cycling was the perfect marriage of these interests and I was hooked on the first climb.

My first taste of the mountains was the Marquis de Sade ride. I halfway expected or feared that I would not complete the ride. I had heard and read horror stories of the tough climbs and even though I had trained well to that point, I had no idea what to expect. White Oak Mountain was easily the toughest thing I had ever done in my life athletically. Green River Cove Road was a close second. 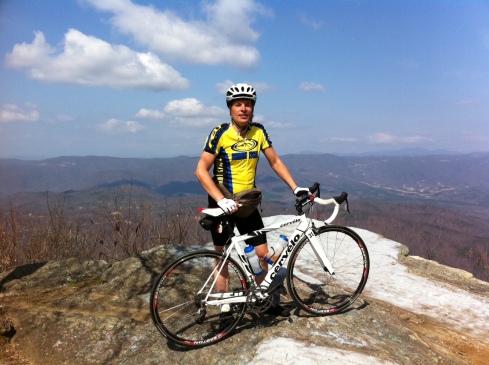 Me on top of White Oak Mountain

The Marquis de Sade ride left me with a thirst for more. I followed it a few weeks later with the Assault of the Carolinas in Brevard, NC, which was my first attempt at Caesar’s Head Mountain — another killer! This ride had some breathtaking descents that made the climbing more than worthwhile.

After a number of other local rides, I headed back into the mountains to get more training. Saluda became my destination of choice and I made a few trips there during the year.

There was one last hurrah before Mitchell, and it turned out to be comparable in difficulty. The Tour de Cashiers was a bear. It was not the same type of ride as Mitchell, but had more cumulative climbing. A couple of those climbs gave me trouble, but they turned out to be the perfect tune-up for the main event two weeks later.

Finally the main event arrived. Even though I approached it carefully and cautiously, I still surprised myself with a strong performance. I finished the Assault on Mount Mitchell in just over eight hours, about an hour quicker than I had hoped for. Even though the weather was not perfect, it was a feeling of elation when I crossed the finish line. Months and months of training for a singular goal, and I succeeded with flying colors. It felt amazing.

After Mitchell, I was on the fence about what to do next. I rode locally quite a bit and traveled some, completed my second double century. Finally I settled on main summer goal, which turned out to be the Hot Doggett in Mars Hill, NC. That was also quite an experience, but of a more difficult kind. I had my own struggles, which I got through, and then I helped a friend through a difficult time.

Afterward I made a few more trips to the mountains, including the Blue Bridge Breakaway, which turned out to be my favorite ride. 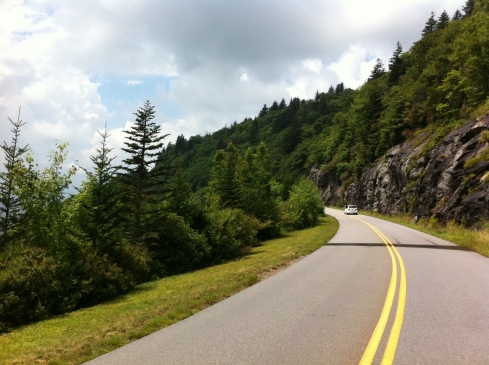 When I planned my fall schedule, I loaded it up with some insane events so that I would finish the season with a bang. The first major challenge was very much like Mount Mitchell. It was Bridge to Bridge, which finished at the top of Grandfather Mountain with a 20% grade. Ouch. It hurt, but I made it up intact. 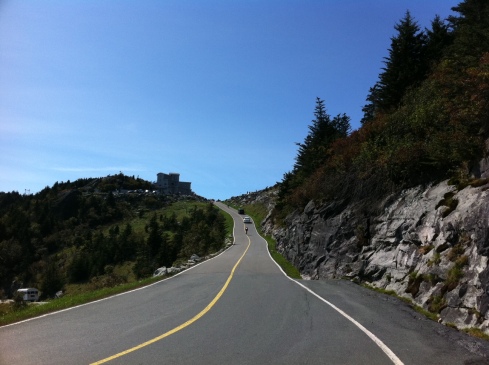 The next event was the MS Ride, a double century and my first experience on an extended ride with a ‘team.’ While this was less of a challenge, it was a blast and a great way to spend a weekend with friends.

The grandaddy of them all, as it turned out, was not a T-shirt ride. It was a ride with the Spartanburg Freewheelers across the state, from Spartanburg to Charleston. We left at 4:30am and arrived on the beach at 8:30pm, exhausted and elated.

Again, what an amazing year. While I’ve had some great experiences in my life, I don’t believe I’ve ever had such an adventure-packed year as this one. Now that I have an idea what is out there for me to accomplish, I expect plenty more adventures to come.

Also to my surprise, a ton of people started reading this silly blog this year. Traffic and subscribers gradually went up every month and that seems to be continuing. It is nice to be out on a ride, meet someone and hear ‘Are you that guy with the blog?’ So far the feedback has been positive. Thanks for sharing it with me.

Like Loading...
This entry was posted on Tuesday, December 6th, 2011 at 6:41 pm and tagged with 2011, cycling, year in review and posted in Blog, Rides. You can follow any responses to this entry through the RSS 2.0 feed.
« Mitchell Training Group, Ride #1
Howard Gap, revisited »