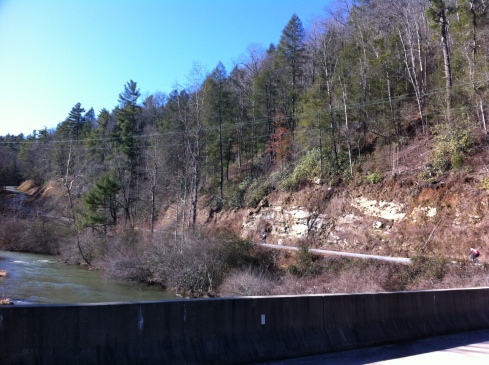 After last week’s insane climbing, one of the riders suggested that we do it again this week. There were some groans, some nods, and I wasn’t sure if he was serious. It turns out he was. I wasn’t planning on riding this week, but Neil concocted a ride intended to top his masterpiece last week. How could I miss it?

One big difference between this and last week was the weather. This week we had to deal with freezing temperatures and occasional patches of black ice. Fortunately we had sunny skies, so everything looked pretty, even if we felt chilled to the bone.

It was about 25 degrees when we rolled out of the parking lot in Landrum, SC, right next to the North Carolina border. Fortunately Neil started with some grunt hills early on to get our blood flowing and our bodies warmed up. The first was Greenwood Drive, around 20%. That did the trick. My face was still numb when we got to the top of the hills, but my extremities were loose and warm.

The next grunt was New Market Road, which was a bit special for me. This was the first real grunt hill I ever attempted, back when I was a puny, beginning rider. I failed that time, having to walk my bike after about halfway up. This time was a different story. It was in the 17-18% range at its steepest. I made it up with ease.

The next surprise would be Howard Gap. That was the dragon I battled with a few weeks ago, thinking at the time that I would wait awhile before trying again. ‘Awhile’ turned out to be 4 weeks. It was still a beast of a climb, but knowing what to expect made it easier. I also didn’t push as hard this time and kept my heart rate in a comfortable zone.

Neil wasn’t through with us yet. Not in the slightest. We made our way towards Flat Rock. We descended a few hundred feet down Camp Creek Rd, a quiet, somewhat gravelly country road. Then we climbed back up. Compared to the others, this was a walk in the park, in the 6-8% range, one of the more moderate climbs of the day.

We descended again, this time on Pot Shoals Road all the way down to the Green River. This was the area where the serious kayakers would launch their boats, I was told. From there we had a bigger climb, steep and comparable to Howard Gap, but a little shorter and easier. Again, I grunted my way up and awaited the next challenge.

Our rest stop this time was at the Flat Rock Bakery. It was so hot inside that they kept the windows open. The warmth was overwhelming as we entered the building. Between that, the hot coffee and the delicious pastries, things felt a lot better from here on out. The temperature barely creeped above 40 degrees, but the only time it would chill our bones was on the steep descents.

From there we made our way to the Grandaddy of them all, Pinnacle Mountain. At the bakery, Neil had claimed that it was a ‘good, little climb.’ Jana reminded us that Neil’s understatements were legendary. When I asked Jay how it was, he casually let it out there. “Oh, about twice Becky Mountain.” Twice?! Becky Mountain was the one that brought me to my knees last week.

Pinnacle Mountain lived up to the hype and then some. It was such a back-breaking climb that it deserves it’s own blog post. More on it later.

We finished up in familiar territory, up the watershed and then Mine Mountain. Both were a lot tougher than usual, thanks to the steep grades my legs had already endured. Once Mine Mountain was over, I was relieved. That would be the last major climb. My off-season conditioning would not have been able to handle much more. We descended the Saluda Grade and celebrated the meal with a hearty Mexican dinner. Mucho Bueno!

Like Loading...
This entry was posted on Sunday, January 15th, 2012 at 3:41 pm and tagged with climbing, cycling, flat rock, Saluda, Tryon and posted in Blog, Climbs. You can follow any responses to this entry through the RSS 2.0 feed.
« Sassafras Mountain, Becky Mountain and More!
Pinnacle Mountain: The Beautiful Beast »

One response to “Freezing Fun in Flat Rock, Saluda and Tryon”