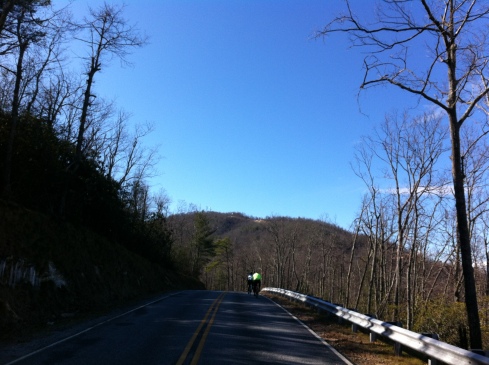 The main attraction of our Saturday ride was Pinnacle Mountain. This was by far the toughest climb I have ever attempted. That was the group’s consensus as well, and we had some experienced cyclists. One of them had 30 years of experience and once had participated in the race across America. We all agreed that this was a beast.

We turned onto Pinnacle Mountain Road from Highway 225 and started out immediately with a steep climb. After we got over the first hump, it leveled off and we climbed approximately a mile to the Sky Top Orchard. We regrouped at the top and someone commented how that wasn’t nearly as bad as we expected. Tom, who had been here before, chuckled. “This is a false summit if I’ve ever seen one.”

As it turned out Pinnacle Mountain is quite a lengthy stretch of mountainous road. In it’s entirety is spans around 17 miles. We covered maybe a dozen, including the toughest part. Aside from the peak, the entire road is up in the sky. We pushed along at between 2,800-3,000 feet, with gentle, rolling hills. Most of the way we could see residential roads to the left that led to gated, expensive houses. To the right we caught glimpses of a vast valley and larger mountains off in the distance. If my bearings were correct, those were the big ‘Southern Sixers’ behind Asheville (edit: a reader points out that it was likely Mt. Pisgah in the distance).

The route was gorgeous and serene. We took our time, absorbed the scenery, took some pictures and enjoyed the conversation. It was not challenging, but we knew that would end in time. We were making our way to the Grandaddy of all the climbs, Pinnacle Mountain.

After riding a ways, we saw the peak up ahead. As you can see in the image above, it did not look too menacing. It was not too much higher in elevation than we were already. The problem is, we kept getting closer and were not climbing. We even descended right before reaching the base of the peak.

The climb began with moderate steepness, probably about the same grade as Howard Gap or Pot Shoals, nothing insurmountable. We rode by a small house with a couple doing yardwork. They greeted us warmly. The climb was still not too bad.

After turning a corner, we faced a wall. The pictures below hardly do it justice. I was a little bit behind some of the riders and I could see many of them stopped in the middle. A couple of them were walking their bikes. These were strong riders. This thing was no joke.

I started up and the grade was instantly punishing. It started in the 20% range and got steeper from there. I’m not sure the exact grade, but after looking at some mapping software, I believe it was between 25-30%. It was insane.

I made it about halfway up and had to stop. The problem was, I could not clip in at such a steep incline. I tried and failed a number of times. Finally I got it by going sideways and slightly downhill, and made my way up. I got to the top of the wall. I was almost to the top and wanted to get some pictures looking down. That is when I saw Neil huffing and puffing up. He was breathing like a locomotive, but did not stop. I got some pictures of him, one of which is below.

The summit was nothing special. It was just a road with a lot of trees around that mostly obscured the view. We gathered together, amazed at the difficulty of what we had just climbed. The entire climb was about 1,000 feet in less than a mile, the majority of which came in the last few hundred yards.

The initial climb on Pinnacle Mountain

Sky Top Orchard, about a mile in

Big mountains in the distance

It was a gorgeous, pleasant ride

Easy start, but evil lurks around the corner

This pic doesn’t do it justice. It was steep. Riders were stopped.

I just climbed this.

Neil Turner makes his way up

After the first Pinnacle climb

Like Loading...
This entry was posted on Monday, January 16th, 2012 at 4:26 pm and tagged with big hill, cycling, flat rock, hendersonville, pinnacle mountain and posted in Blog, Climbs. You can follow any responses to this entry through the RSS 2.0 feed.
« Freezing Fun in Flat Rock, Saluda and Tryon
The Cycling Benefits of a Strength Routine »