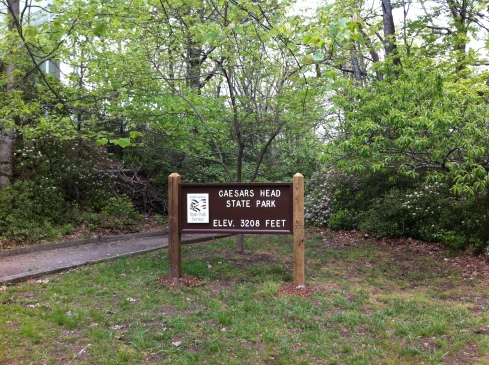 The weekend was foremost about the rides, and we had a lot to choose from. My goal was to ride and climb as much as possible. This would be my last big training weekend before buckling down and getting set for Mitchell. This was also my weekend to complete the Strava Climbing Challenge (which I did – woohoo!).

People arrived at different times on Friday, so the idea was to split up the group rides into short loops at different times of day. I arrived early enough for the first loop, which would head up Caesar’s Head Mountain. On the way back we stopped at Bald Rock, somewhere I had passed curiously multiple times without stopping. It was cool to finally see what the big deal was. This was a vast slab of rock that curves downward. A few of us took off our cleats and walked carefully in bare feet towards the rocky edge. The view was startling scary — almost straight down. It looked like streets below the rock, but it was just more rock. The entire slab had spray-paint graffiti everywhere. Wherever the eye traveled, it would learn about some young couple’s love for each other.

The Lumberton crew arrived in the afternoon. They wanted to ride Caesar’s Head, so we did it again. Why not, eh? I needed the climbing anyway. For the first loop I rode up casually. The second time I pushed a little more, talking about mountain adventures with Matt from Lumberton. We didn’t stop on the way down. When I noticed that Jim of CruzBike had a recumbent, I was at first nervous. Would that thing be able to climb, and more importantly, could it safely descend? He assured me not to worry, and I was surprised by how well he did. He was just behind me on the climb and the descent. I couldn’t help but notice how he powered over the rolling hills below the mountain, the same ones that stopped the rest of us in our tracks.

On day two I was off to Walhalla for Issaqueena’s Last Ride. The rest of them did a monster ride from Table Rock that went into Rosman, up 215 to the Blue Ridge Parkway, back down 276 to Brevard, and then back to Table Rock. It sounded glorious. I wish I had enough time and legs to do both. You can read John’s summary of that ride at his blog.

The group was not yet back after I returned from Issaqueena. As a coincidence, I saw Tom riding while I was entering the park. He was just swinging by to say hello. Since I wanted a little more riding, we did a little loop around the rolling hills up towards Caesar’s Head. He had to ride home to Greenville, so we parted ways about mid-way and I followed Highway 11 back to the park.

On all three loops to that point, I had taken the hard way back into Table Rock. From the lodge entrance are some tough climbs, some of which reach grades toward the high teens. They all hurt after riding up a mountain. Having not learned my lesson, I chose to take the hard way after my loop with Tom. It was excruciating and I swore not to do it again. The back entrance was far easier, with just a couple moderate climbs.

Sunday was another big loop. This one took us up Highway 178 into Rosman, along the gorgeous East Fork Road and then the backside of Caesar’s Head. Everyone was spent for this ride. We practically grunted and groaned our way up the 178 climbs. I was so committed to riding recovery pace that I didn’t even wear my heart rate monitor. I just took it easy the entire way, spinning at a comfortable and not too painful cadence.

At the Rosman store stop someone mentioned we were going to ride up something called ‘Big Hill.’ They asked if I had been there. I’ve been on lots of big hills, I joked. Which one were they talking about? As Neil put it, I would remember it had I been there. As always, Neil was right as rain.

We traveled down the scenic East Fork Road, which followed a river stream to our right. We encountered a number of fishermen along the way. There was one instance where John yelled “Road Kill!” real loud to alert us of a carcass in the road. Right as he said that, we passed a father and son, who immediately turned. I saw the poor kid’s face turn to fear, as he thought John was calling him road kill. It was sad and funny at the same time. Poor kid.

East Fork was a peaceful, flat ride. I could have sworn I had been on that road before. I still think I had, but clearly not to the very end. I had not been on big hill.

It started with a bang, probably around 16-18%. On my tired legs, that felt like 30%. I stood up and tried to power through it, using my upper body strength to pull on the handlebars and relieve pressure on my legs. It leveled off a little bit to a more manageable 6-8% grade. Phew. I could handle this. Right about the time I started to get comfortable, Neil looked at me and said “this is where it makes you think you’ve done something.” Uh oh. He was right. After we turned the corner, it pitched up again to the high teens and stayed there. I slowly tried to make my way up. In the last 50 feet there looked to be a docile dog on the left side of the road. As I got closer, he showed his fangs and started to chase, forcing me to pick up the pace. Oww. I gunned it and was at the top before I knew it. The dog didn’t chase.

When I got to the top, I saw why they call it ‘Big Hill.’ At the top is the entrance to the Big Hill subdivision.

As we climbed Caesar’s Head, the easy way (ha!), I just tried to keep a decent pace and get through it. John was behind me for part of that climb and he thought I was trying to drop him. Nope. I was just trying to hang on myself.

What a weekend. In total I rode 248 miles and climbed 22,000 feet in the three days. Thanks again Neil for putting it all together. We had a fantastic time.

A mammoth slab of Bald Rock

Don’t get too close. It is almost a dropoff at that point.

Riding along East Fork towards Rosman

There were lots of fishermen on East Fork Road.

The steep part of Big Hill.

Like Loading...
This entry was posted on Thursday, May 3rd, 2012 at 9:57 pm and tagged with bald rock, big hill, brevard, caesars head, climbing, cycling, rosman, table rock and posted in Climbs, Rides. You can follow any responses to this entry through the RSS 2.0 feed.
« Table Rock Weekend, 2012
Tour de Cashiers, 2012, Cashiers, NC »