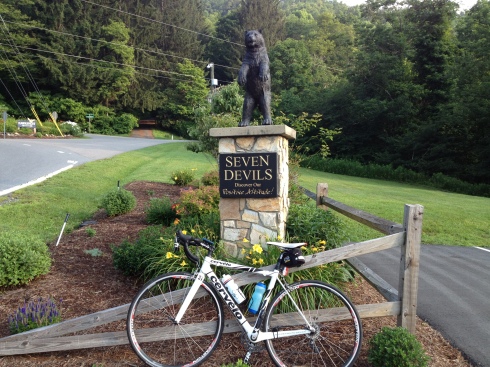 It was the day after Blood, Sweat & Gears and we would be leaving the Boone and Banner Elk area soon. It turned out we could not make Cyclo-via, so I wanted a final mountain ride before heading out. Fortunately I found one right next to the hotel.

I have to give John Summerson some kudos for this one. I found it from his Southeast climbing book, which I recommend any serious climber pick up.

The climb started in the nearby neighborhood of Seven Devils. This is a small resort town with an off-season population of a mere 129. The climb started easily enough when I turned from Highway 105, but it wasn’t long until it turned up into double digit grades and stayed there. It was a challenging climb, with a few tight switchbacks and steep pitches. Little did I know how much more would be coming ahead.

After navigating the steep grades for just under two miles, I found myself in the heart of Seven Devils. It really is a small town, an intersection really, with an apartment complex and a Town Hall. There were lots of small roads that led to other houses and resort facilities, which I didn’t try, although I imagine there are steep climbs throughout the town.

I followed John’s instructions for what he calls the Hawksnest climb. This is a ski resort that boasts of snow tubing and the longest zipline in the Southeast. I turned onto Skyland Rd, which would take me almost to the resort. This was a much more moderate grade, maybe in the 3-4% range, with a downhill about midway and one steep hill just to keep me on my toes.

I could see the ski hills up ahead in the distance, and knew this meant my next turn onto Skiview Road would be coming up. I saw a seriously steep road to the right and thought that was probably a driveway. To my surprise and anguish, that was my turn. The steep grade hit me like a ton of bricks. It must have been right around 15%. It stayed in that vicinity for the majority of the climb. After getting past the first pitch, I saw was a retiree couple driving down the mountain. They looked at me curiously as I huffed and puffed slowly my way up the insanely steep hill.

I came across another pitch in the road, with a sign that said blind hill ahead. That can’t be good. It wasn’t. That was easily the steepest section. My Garmin showed that it was mostly in the 18% vicinity with a peak of 20% at the end.

After winding around for around a mile, the road narrowed to one lane. The steepness persisted around the 13-16% range, with occasional breaks to around 10%. There was one last road near the top, which was just a small hill, but John listed it just to extend the climb. This was Divine View Road. This was practically a driveway, as there was only one house on the road. I could tell that the so-called ‘Divine View’ was probably from their patio. I was tempted to cross the driveway if it weren’t for the No Trespassing sign. Not a good idea to disobey those signs in the mountains of NC.

All told, the climb was about 4 miles, of which I averaged between 5-6 mph. I consider it to be slightly more difficult than Snake Mountain, the toughest climb on the Blood, Sweat & Gears ride.

The descent wasn’t much better. With narrow roads and steep grades, I found myself sitting on the brakes, wearing out my hands. I had to stop a couple times. It was a relief to get back to Hawksnest, where the road eased off. Seven Devils was a technical, but manageable descent.

It was tough to leave. The Boone and Banner Elk area is a cyclists paradise. There were so many other climbs I wanted to try out, but alas, I had not the time, nor the legs. Another day.

I love these signs. What does that say about me?

A switchback up to Seven Devils.

Thanks for having me.

Skyland Dr allowed for a little bit of relief.

Hawksnest ski slopes could be seen way out in the distance. They were closed.

What a steep neighborhood this was!

This blind hill was the steepest part of the ride, between 18-20%.

Divine View Rd ahead would be the end of the climb.

I’ll bet that view was amazing.

Like Loading...
This entry was posted on Thursday, June 28th, 2012 at 5:42 pm and tagged with banner elk, boone, cycling, hawksnest, mountain, seven devils and posted in Climbs. You can follow any responses to this entry through the RSS 2.0 feed.
« Blood, Sweat & Gears, 2012, Valle Crucis, NC
Blood, Sweat & Gears Wrap Up »