“What’s the biggest hill in the Chapel Hill area?” I asked Alvin, a blog reader who lives in the Raleigh/Chapel Hill area. I would be visiting some family members over the weekend and wanted to skip away for some quick, early morning rides. Chapel Hill has a lot of mild rolling hills, but there are not many real climbs to speak of. Alvin told me about one, however, that fans the flames of the local competitive spirit.

As it turns out, this was perhaps the worst weekend for riding all year. The entire Eastern coast was struck by a relentless heat wave. Record highs were broken everywhere as temperatures shot to the sky. It was 109 in Columbia, the same day that I left town. Usually Chapel Hill allows me to escape some of the heat. That didn’t matter much this weekend, as the high there was a stifling 106.

Alvin invited me to join his B+/A- ride out of the Cycling Spoken Here shop in Cary. They do a 50 mile loop, with options to extend or cut the ride short. We left at 8:30am, a little late to beat the heat. I was banking on the chance of cutting the ride short given the high temperatures that would be waiting for us. To make a long story short, it was quite the fast ride and a different way of riding for me. I started to bonk as the temperature rose above 85 degrees. The sun seemed to sap my strength a little more with every minute. Alvin graciously rode me back to the shop. I had very little in the tank when the temperature hit the mid-90s. It was just shy of 100 when we got there, and I practically limped in. 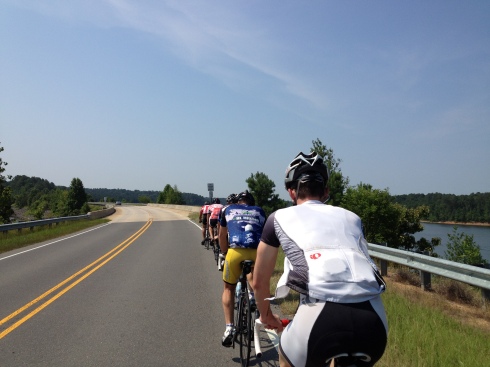 Our Saturday ride was pushing it around Lake Jordan.

I was determined not to be affected by the heat for my Sunday morning ride. This time I would seek out the so-called Col du Lystra, the biggest hill in Chapel Hill. It is on the opposite side of Lake Jordan from where we rode on Saturday. By most standards, this would not be a major climb. For Chapel Hill’s vibrant cycling community, it was Mont Ventoux.

Fortunately it was in the 70s when I left at daybreak. I planned to be back before the heat could slow me down too much, although I was still suffering some lingering sluggishness from my Saturday struggles. I scooted through the bike lanes of downtown Carrboro, and found another decent climb on the way on Smith Level Rd and Highway 54.

It took me 15 miles to find Lystra Road. The road plummeted not too long after turning from 15-501. My speedometer jumped over 40 mph without the slightest amount of effort. Yep, that was the climb. After a few miles of cycling around the area, I turned back around to face the monster.

As I was casually riding along Lystra, I saw the words “KOM starts here” written on the pavement. Apparently they take Strava as seriously as we do. I found out soon enough that this is quite a hill. It starts out around the 6-8% range and quickly pitches up to 10-11%. It doesn’t stay there long, leveling back out to around 6-8%. There is a false summit and an easier grade, then some up and down rollers with an upward trend. Overall there is around 300 feet of elevation gain. Not a bad hill for being smack dab in rolling hill central. It was big enough that I think it warrants inclusion in my NC Climbs section. I’ll add the Smith Lever climb while I’m at it. 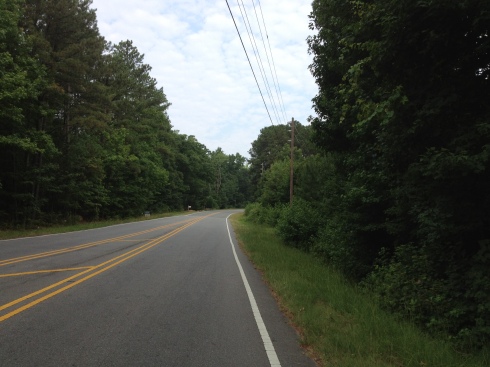 The Col du Lystra was a good challenge, although not very scenic.

When I uploaded my Strava data, I was surprised by the activity. There were several different segments. There was one with just the toughest pitch, another with all the rollers combined, and a few others. Needless to say, I did not fare too well. I was 68th out of 79 on the ‘All the uphill that Lystra has’ segment, which is 3.2 miles. Perhaps next time I’m in the area, I’ll find some energy and give the locals more of a challenge.