For Wednesday, I met up with the brother (Mark) and his best friend (Michael), of a friend in Greenville (Matt). I know, confusing. Don’t ask how many times I mixed up their names. Sorry guys! Mark lives in the Denver area, and Michael was visiting from Morgantown, PA to spend some time in Colorado and then participate in the Copper Triangle ride on Saturday.

We met in Frisco to ride to Copper Mountain and then Vail Pass, which would be the opposite direction that we would be riding on the Copper Triangle. The best part of this ride is that it would take place entirely on bike paths. We would not need to ride on a street at all. The idea was that this would be an easy spin that would not thrash our legs for Saturday. It was a great idea.

This was my first real climb entirely on a bike path, and it was awesome. The roads were smooth, and aside from touring mountain bikers, there were not too many obstacles.

We were barely warmed up before the climbing began, but it was hardly punishing. The grade was very slight and often I could not tell we were climbing. We were upon the ski slopes of Copper Mountain before we knew it. This was cool because it will be the starting point for Saturday’s ride. They already had the finish line banner up and everything.

From Copper, we took the path that leads to Vail. Initially the climbing was light, just like before. At one point I looked down at my Garmin and as surprised to see that we were at 10,000 feet already. The last part of the climb was a little tougher. There were some switchbacks that we had to navigate, and a couple steeper climbs. My Garmin showed 10% at one point.

As has been the case throughout this trip, the scenery was magnificent. The path parallels Interstate 70. At times we would be underneath the freeway in the valley below; other times we would be right alongside it. Often there would be a stream flowing alongside us. Almost always we were surrounded by monolithic, transfixing mountains.

To my surprise, the summit of Vail Pass was a highway rest area. We were trying to find a sign of some sort for a group picture, but there was none. We asked a nearby tour guide, who said that the only sign was on I-70. Ummm, no thanks. We found a scenic vista as a backdrop, and asked that same guide to take our photo. I think it came out well. 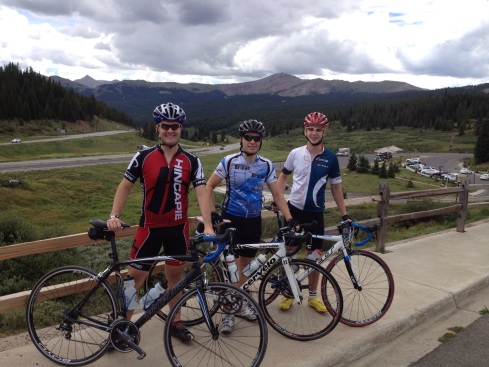 From here it was mostly downhill back to Frisco. There were more riders on the path here. A number of tour operators will transport people and their bikes on a bus to the top of Vail Pass, which allows them to coast back down. We joked that this was a way of cheating, but in all honestly, I’m happy for people that ride a bike, regardless how they do it.

We flew down that bike path. There were a couple times where we had to wait for opposing traffic to pass, but that barely slowed us down. The descent was a blast, and I cannot wait to ride it again on Saturday.

After passing through Copper Mountain again, Mark told us of an upcoming straightaway. He said he was going to ride hard, so grab his wheel. He wasn’t lying. He dropped both of us almost instantly. Later after we caught up, Michael surprised us both by attacking. I was completely caught off guard, not even in the right gear, but I pushed anyway. It took me a bit to catch his wheel, which was probably more due to my extra acclimation days at high elevation.

Mark attacked a few minutes later. This time I was halfway expecting it. I stood up to sprint, and managed to stay on his wheel. I was panting, and barely able to breath the thin air when I joked that next time I would just let them go.

Fortunately we were almost to Frisco, so there were no more attacks. We coasted in, ending the day with a fine meal and brew at Backcountry Brewery. Although the Rocky Mountain Oysters were tempting, I opted for fish and chips.

The stream and mountain scenery along the way to Copper Mountain.

Enjoying the scenery behind Mark’s wheel.

We would be taking the shorter route. Coming back the other way on Saturday.

We would be along or near I-70 throughout most of the ride.

Michael pushed it for the tougher grades.

The summit is a rest area? Whatever works!

Back at Copper Mountain, Michael and Mark eye the finish line.

Like Loading...
This entry was posted on Thursday, August 2nd, 2012 at 5:51 pm and posted in Climbs. You can follow any responses to this entry through the RSS 2.0 feed.
« Breckenridge, Hoosier Pass, Frisco
Loveland Pass from Keystone, CO »