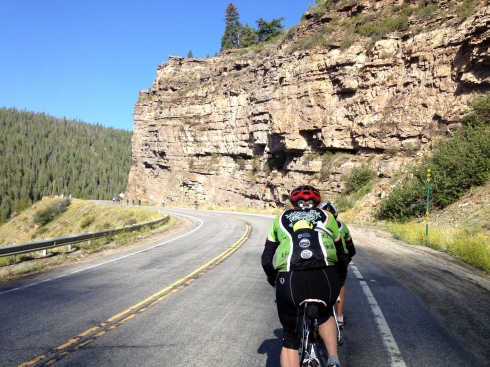 My final event in Colorado was the main event, Copper Triangle out of Copper Mountain. I joined 3,000 riders on a chilly Saturday morning for an 80-mile romp around the Rocky Mountains.

After a week’s worth of riding in the Rockies, I was not planning to attack the Triangle with any aggression. This would be a casual ride for me, a way to experience and see more of the Rockies without any hassle. There were probably plenty of people who rode for time, but not me.

The staggered start time was perfect. They allotted more than a 3-hour period for riders to start, anywhere from 5:45am (first light) to 8:00am. I wanted to get finished early, so opted to start near the beginning. After getting ready, I rolled to the starting line along with a handful of other riders. I halfway expected some ceremony, or for riders to be released in waves. That wasn’t the case. A gentleman handed me a queue sheet, and pointed me to the starting line. I quietly crossed and began my ride.

This eliminated the massive crowd riding. I’ve been in countless rides where in the first 30 miles, the pack starts and stops suddenly. It can be stressful and annoying. Copper Triangle was nothing like that. There were plenty of other riders on the course, but not so many to give us fits.

I had become used to cold mornings in elevation, usually sunny in the 40s, with temperatures rising quickly in the early mornings. For some reason, it was much colder that Saturday morning. My somewhat accurate Garmin showed the mid-30s. I had brought most of my cold weather gear, but not all, which would come back to bite later.

We began the ride by leaving Copper Mountain resort, and climbing our way up Fremont Pass. I was pleased with an early climb, as it would warm my body up. My hope was that after the climb, the temperature would have risen dramatically.

Fremont Pass, like most of the Colorado climbs I experienced, is not too difficult. It is not steep, just long. There were many short sections in the 4-6% range, then the climb would level out. I wasn’t sure how long the climb would go, and on a few occasions thought we had reached the summit when the road flattened. It wasn’t until around mile 10 that it ended, after approximately 1,500 feet of elevation gained. It took me just under an hour.

The rest stop was phenomenal. I made it a point to stop at all save for the last one. They had a large SAG tent, which I was fortunately not to need. They had good food, plentiful bathrooms, and many stops had vendors with free samples (like Clif), and other frills. I fell in love with some mini blueberry muffins, which I enjoyed at the Fremont and Tennessee Pass rest stops.

The descent down Fremont Pass was, in a word, freezing! I’m not sure if I’ve ever been that cold in my life. I could tell that it was a great descent, with smooth roads, gradual turns, and an easy grade, but the temperature kept me from enjoying it.

After the big descent, my feet were like popsicles. We would bypass Leadville, and head towards the next climb, Tennessee Pass. I asked a rider if we would begin climbing to the Pass soon. He looked at me and said, ‘we’re almost there.’ I looked at my Garmin and it turned out we were climbing, but very easily. Before I knew it, I saw the brown and yellow Tennessee Pass sign. Was that it? It sure was. The total climb was only about 400 feet over three miles, which I barely noticed. From what I understand, the climb is a lot tougher in the other direction.

At the rest stop I took off my shoes to stretch out my frozen feet. I ignored the strange looks. This was just what the doctor ordered. While the temperature had not climbed as much as I would have hoped, it would be enough to keep me from freezing territory. The descent down Tennessee Pass was another fast and cold one, but not nearly as crippling as Fremont had been.

The next obstacle would be the 300-foot sinkhole along the side of the road. It had collapsed only a few weeks before the ride. Colorado DOT had the road closed indefinitely, and opened it to single lane traffic shortly before the ride. I was hoping to get a peek, but alas, they had it pretty well blocked off with construction. The DOT was very accommodating for us bike riders. They had both a car lane and bike lane blocked off with cones.

I had been warned that although the ride advertises the three mountain passes, there is a quiet killer in the middle of the ride — Battle Mountain. It was a steeper climb than many of the others, but it was short and scenic, and quite frankly, fantastic! We climbed a rocky cliff with a gorgeous view of the valley below, little by little making our way up. We crossed the valley by way of a beautiful bridge, which I was hoping would make for a nice picture, but the sun was shining in the wrong direction.

The descent off Battle was plain awesome. In fact, the middle of the ride had a lot of descending with a couple of bumps (Tennessee and Battle). That would all end, however, after we dropped into the Village of Vail.

At the Minturn rest stop, one of the volunteers asked how I was doing. ‘Great,’ I said truthfully. He laughed and said, ‘not for long, but you’ll be feeling a lot better when you get to the top of Vail Pass.’

Near the beginning of the 20-mile climb.

Vail Pass was the signature climb of the ride. We would make up all of the elevation we had descended and then some. The climb actually began as we passed by Lionshead Village and the Village of Vail. It began easily enough with 1-2% grade, and would continue in this manner for quite a ways. The ski-villages made for some interesting viewing as we slowly climbed upward, but the real climbing would take place afterward. We crossed over the highway, and took a pathway that climbed at a 5-6% grade. There was a lot of writing on the road, encouraging Tour riders. Just like at Independence Pass, that let me know that this was a serious climb.

After a number of miles, we crossed over the road and onto the recpath, just like the one I had ridden a couple days prior in the other direction.

Things got real on the recpath. We rode parallel to I-70, and at times, the climb spiked up to steep grades. There was one difficult section that sustained 12% for a couple hundred feet. On top of everything, the sun came out in full force, with the freezing temperatures behind us. I was still wearing layers, many of which I could not shed. Vail Pass is when everything caught up with me. I didn’t die on the climb, but I became very tired, and people started passing me.

As we got closer to Vail Pass rest-stop summit, the climb leveled out. The last couple miles were at a moderate grade. The air cooled, and I regained some steam. The volunteer was right. I was ecstatic when I reached the summit, and the subsequent descent could not have been any sweeter.

A couple miles later, and I had arrived back at Copper Mountain resort. The finish line was in the heart of the resort, usually only accessible by foot traffic. As I rolled through the blocked off area, I first heard the applause. It was a grand finish, with lot of spectators cheering, hooting and hollering! Now that was a great feeling!

It was a fun and festive finish.

It doesn’t look as cold as it felt.

Almost to the top.

One of the few passes without cool summit signs.

This was the ‘blink and you miss it’ climb.

One of the many amazing support stops. Organizers and volunteers were terrific.

The sinkhole was somewhere behind this construction.

The Battle Mountain climb turned out to be my favorite of the bunch.

Another scenic section of Battle Mountain.

Gorgeous bridge. If only the lighting allowed for a better photo.

Near the summit of Battle Mountain Pass.

We rode comfortably through Minturn until facing Vail Pass.

The latter part was off the road.

Near the beginning of the 20-mile climb.

Riding by Lionshead Village in Vail.

It looks like a road path, but I never saw a car.

This was around 12%. The ride to Vail Pass could be steep.

We rode leisurely along the freeway.

It was a fun and festive finish.

Like Loading...
This entry was posted on Thursday, August 9th, 2012 at 7:03 pm and tagged with battle mountain, climbing, colorado, copper mountain, copper triangle, cycling, leadville, minturn, mountains, vail and posted in Rides. You can follow any responses to this entry through the RSS 2.0 feed.
« Independence Pass from Twin Lakes, CO
Colorado Wrap-Up »