As noted in the post for Climbs 20-11, there was no clear criteria for how to rank these. Somehow I ended up ranking most of the “epic” climbs near the top. These are the longest, toughest, most brutal climbs, the type that I would swear never to ride again after reaching the summit. These are also the climbs that I end up being the most proud, the ones that really feel like an accomplishment.

10. Rosman to Blue Ridge Parkway (Hwy 215) – This is a road that I had ridden nearby many times, but never taken until early this year. It is a fantastic climb, beginning near Rosman and ending up at the Blue Ridge Parkway, not far from Devil’s Courthouse and Richland Balsam. There are some mini-climbs at the beginning, and the real climb begins after passing Balsam Grove. It is nearly 8-miles of consistent uphill. As you get higher, the views get better.

9. Snake Mountain – The toughest climb on Blood, Sweat & Gears was a back-breaker. It starts out easily enough that many will not realize they are climbing at first. Near the middle and toward the end, it ramps up — way up! The grade reaches above 15%, and some have argued it gets to as high as 20%. At this point, many people will simply get off their bikes and walk. This is called being snake-bit, according to the locals. Thankfully, I didn’t get bit, but that doesn’t mean I didn’t struggle to the top. 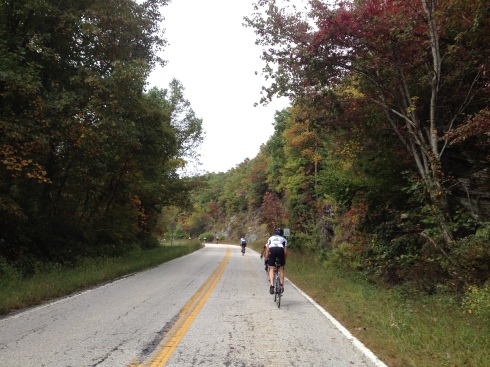 8. Hogpen Gap – I had the great fortune of riding this climb twice in the year, and they seemed like very different experiences. The first time was on a 3 Gap + Brasstown route with a friend, where we started with Hogpen. I was surprised that it was not as difficult as its reputation. The second time was on Six Gap Century, and it practically killed me. It makes a big difference when you’ve already climbed three other gaps.

7. Loveland Pass – This pass in Colorado is an alternate way toward Breckenridge and Frisco without going through the Eisenhower tunnel. It’s also the long, scary, winding way. I rode up it from Keystone, CO, by the Arapahoe Basin ski resort, and all the way to the summit. It is an 8-mile climb with an 8% grade almost the entire way with no breaks. The summit is just under 12,000 feet altitude, right above the treeline.

6. Sassafras Mountain – I should mention that the road to Sassafras has been paved since I climbed it, but I expect it to be just as difficult now. When it was our turn, the road was chopped up and steep. What makes this climb so difficult is that there will be sections with a 20% grade, then a flat or even slight downhill section, then another steep incline, and so on. You cringe every time the road up turns up, just praying that it’ll be a little easier, but in most cases, it isn’t. They are now building some facilities and visitor’s center at the summit. That and the paved road should make it an interesting climb next time.

5. Pinnacle Mountain – This is the climb that came out of nowhere and just kicked our collective tail. It isn’t long, but it may be the steepest road I’ve encountered. It starts off at a moderate grade, maybe 6-8%, then you turn a corner and literally see a wall before your eyes. I’m not sure the exact grade because my Garmin stopped recording after awhile, but somewhere between 25-30% for several hundred feet. It was crushing, and just about everyone in our party had to stop at some point for a break. While the summit doesn’t afford too many views, the long stretch of road before you approach the final pitch is very scenic with a lot of smaller climbs. 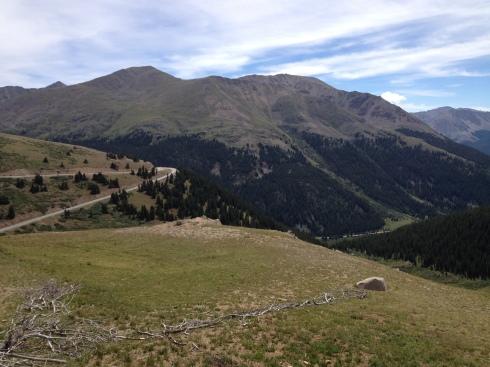 4. Independence Pass – This is one of the long, not-very-steep climbs that Colorado is famous for. From Twin Lakes, it was about 15 miles at an average of 3.5% grade. The further you get, the tougher the climbing gets and you have to deal with altitude. At just over 12,000 feet, this was my second highest climbing elevation on the Colorado trip. The views are spectacular, mostly above the treeline. Climbing this by myself was the closest thing to having a religious experience on a bike. I was just blown away by the beauty and the physical exertion to get there. This was also the scene of my greatest photo op. When someone offered to take my picture, I lifted my bike up in the air and felt like screaming in triumph. It was a great experience. 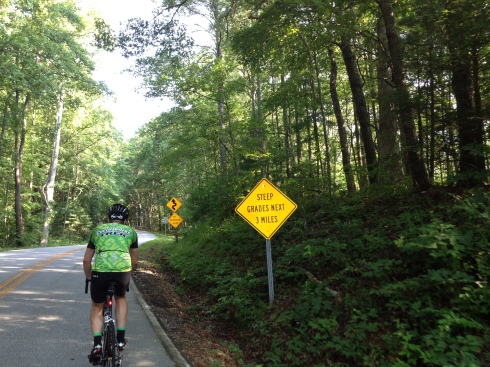 3. Brasstown Bald – It is not surprising that many of my finalists are the highest points in their respective states. That’s the case with Brasstown Bald, the highest point in Georgia. Unlike many of the gaps around the area, it is relentlessly steep. It has a wall of its own that is above a 20% grade. I remember having to concentrate during my climbing to make sure my bike did not flip over. The grade was so steep that my front tire wanted to leave the ground. The road takes you a couple miles until the parking lot at the visitor’s center. There was another 500 feet to go, but bicycles are strictly not allowed. The park ranger absolutely refused to let us go. It’s always disappointing to have to stop before the top, but the climb to the parking lot is plenty challenging.

2. Clingman’s Dome – Another state high, this time in Tennessee, although our climb started in Cherokee, NC. This is another long, gradual climb, easy at the beginning, hard at the end. The entire climb was 22 miles where you gain a whopping 4,500 feet in elevation. We took the highway to Newfound Gap, where we turned left into the park for the last several miles. We climbed during the off-season when the park was closed to traffic. This is probably the best time to ride assuming the weather conditions cooperate. There is an overlook at the very top with some splendid views, but the last few hundred feet in the park is extremely tough, in the upper double-digit grade. It is well worth it, as the observation tower might be the best in the Blue Ridge. 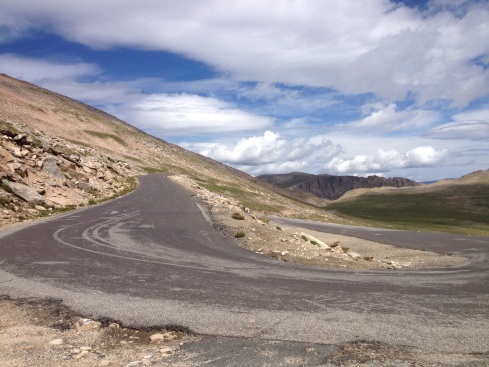 1. Mount Evans – It should come at no surprise that the highest point in America is my climb of the year. This climb redefines the word epic. It was majestic. You begin the climb from around 7,000 feet at Idaho Springs, and finish at above 14,000. What had made my climb more challenging was that I had been at 300 feet altitude a couple days before trying. We rode before I had a chance to acclimate, and I was worried about potential sickness, but fortunately I did fine. It wasn’t until the very end when I reached the summit that I started to feel a little drunk. The total climb was 28-miles. It was again, not very steep, maybe at 8% at the most and averaging around 3-4%, but we gained a shocking 6,700 feet in elevation. This is an experience to remind you how great it is to be alive, and what amazing things that man is able to accomplish. 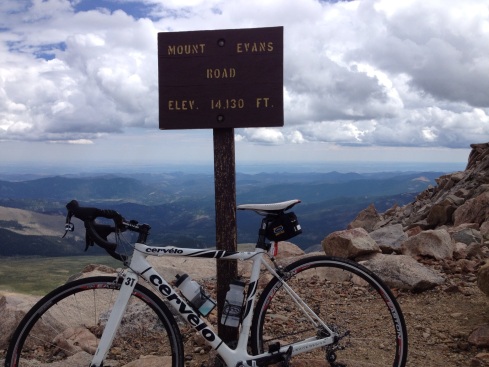 Thanks for sharing this with me. I expect plenty more climbs next year, although I’ll need some time to heal from my injury first. My goal is to make it out to Virginia, Tennessee, Alabama, and of course, France.