After rolling through the outskirts of Brevard, we descended into a flat valley. There was a large farm on the left, a few cows scattered about, with lush green grass nearly as far as the eye could see. The sun was shining bright, highlighting the beautiful countryside. We pedaled together in a massive pack, the flatlands giving us a momentary reprieve from the punishment.

I recognized where we were, and knew instantly what was coming next. After pedaling through the flats for a couple miles, we reached the other end of the valley, and then turned right at Walnut Hollow Road. That would be the first challenge of the day, and the one that I had really been worried about.

As most readers of this blog know, I had been sidelined for months with a freak stress fracture in my hip region. The hip is still healing, and I have only been riding for approximately a month, gradually increasing the mileage and intensity. The Assault on the Carolinas would be my longest ride of the year, my first organized ride of the year, and my first time in North Carolina since December of 2012. Since I was still in the healing process, I was nervous how the day would go, yet still thrilled to be back on the bike.

Walnut Hollow comes early in the ride, about 8 miles in. While it is a tough climb, it did not give me too much trouble in 2011 or 2012. The road pitched up slightly, and I could see dozens of riders ahead of me fighting the steep grade. It gets steeper as you go. At it’s steepest, the grade is around 14-16% (depending who you ask).

There were a pack of locals on the side of the road, somewhere around the steepest section, one of whom had a trumpet and another had a baritone. They were hooting and hollering. I’m still not sure whether they were cheering us along or laughing at our struggles. I’ll pretend it was the former. The trumpet would just belt out a sharp tone repeatedly, while the other guy played the melody of Black Sabbath’s Iron Man. It was an amusing distraction from the pain of the climb, but I most certainly did not feel like an Iron Man today. 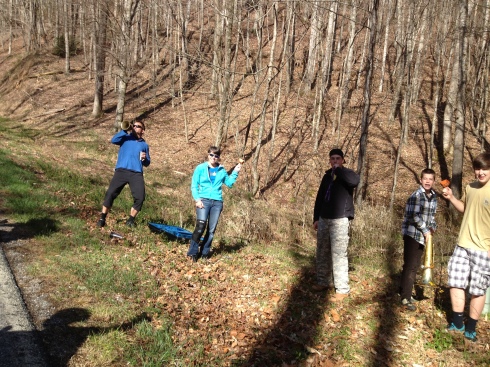 These guys made Walnut Hollow even more memorable.

This was tough. I simply don’t have a lot of climbing power at this stage of my recovery, and I’m careful not to ask too much of my hips and legs. I struggled on the climb, wobbling a little bit (sorry to the riders near me). After a lot of panting and a few grunts, I made my way to the top.

After the big descent, we turned onto East Fork Road, one of my favorite roads in the area. It follows a small stream where you can often see a number of fishermen in the water. It is just a relaxing and pleasant journey. We then turned onto Highway 178 to make our way toward the Continental Divide and SC state line.

Highway 178 is a gorgeous road, with a lot of short climbs and some exhilarating descents. While I still had a little trouble with the climbs, I was in prime form on the descents. I remember my first Assault and what a reluctant descender I was. It was even a little nerve-wracking because people would bomb past me. This time the tables were turned. I was the guy zooming down the hills, carefully navigating around the nervous, uncomfortable riders, politely telling them I was “on your left,” and thanking them after I passed by.

The first descent from the Continental Divide to Rocky Bottom, SC, was two miles. A couple short climbs followed, and then came the big 4-mile drop down past Jocassee Gorges, and into the foothills of South Carolina. If I ever make a list of my favorite descents, this will be somewhere near the top. It isn’t too steep. Some of the curves can be a little tight, but they are easy to maneuver through.

Fortunately I had some friends waiting for me at the next rest stop. This would become my longest ride of the year somewhere on Pumpkintown Rd, still with a big freakin’ mountain to climb, and I was starting to feel a little tired. They put together a nice pace-line. I was fortunate to be behind Ricky Soxl, one of the tallest cyclists I know. There wasn’t much wind behind his big frame. That was the only way I could keep their pace. As we got closer to Caesar’s Head, he backed off for some reason, and that was it for me. I dropped off, not wanting to punish myself further. We caught up at the rest stop, but I knew that I would be on my own for the climb. 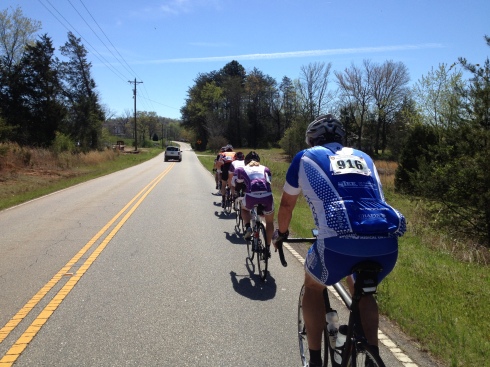 Our Pumpkintown Rd paceline. Thanks Ricky for the draft.

Hello again, Caesar’s Head. I have ridden this climb quite a few times before, but never had it been as difficult as today. The sun was bright, and the temperature had creeped higher, which didn’t help matters. The most important thing was getting through the climb without hurting myself. I went very easy. People passed me constantly. I carefully watched my heart rate, trying to keep it between 165-175. Since I don’t have the best cardio fitness at this point, that meant I was not going very fast.

My goal was to not stop no matter what. Even though I may not be in peak shape, I still don’t consider myself to be a quitter. Part of getting better is maintaining the mental toughness required to persevere when things are tough. However difficult, I maintained my momentum, and kept turning the pedals until I reached the top. It was easily my slowest climb of Caesar’s Head ever, about 30 minutes slower than my fastest time. As slow as I was, I did not set my foot down.

I reached the top in a state of exhaustion. I was completely spent, but day was not over yet. There were still about 15 miles to ride back to Brevard.

A group passed me as I was struggling in the headwind on Highway 276. I hopped on, glad to have a reprieve from the wind. Pulling us along was a gentleman with an Asheville Racing jersey. We kept on passing people, and they would join the line. I expected him to back off to rest, but he kept on going, pulling us almost the entire way back to Brevard. I passed him on a descent, thinking I had lost the group, then he caught back up with me a few miles later. Whoever you are, sir, thank you for the pulling.

Phew. I finished. Because of my recovery, this may rank as one of the toughest rides I’ve done. I was not going for time, but happened to notice that I finished an hour slower than last year. No complaints there. Just finishing was a win for me.

Thanks to the Pisgah Rotary Club and the entire Brevard community for making this such an enjoyable ride. This is among my favorite rides, and I’m glad to see that it has grown so significantly over the years. See you guys again next year.

Starting line from the middle of the pack.

Starting line from the front of the pack.

Riders everywhere as we leave Brevard.

The beginning of the Walnut Hollow climb.

These guys made Walnut Hollow even more memorable.

One of the many short climbs on Highway 178.

Caesar’s Head beckoned up in the distance.

No turning back now.

Our Pumpkintown Rd paceline. Thanks Ricky for the draft.

A steep switchback near the top of Caesar’s Head.

Like Loading...
This entry was posted on Sunday, April 14th, 2013 at 10:58 am and tagged with assault on the carolinas, brevard, caesars head, climbing, cycling, east fork, exercise, jocassee gorges, mountains, pumpkintown, rocky bottom, stress fracture, walnut hollow and posted in Rides. You can follow any responses to this entry through the RSS 2.0 feed.
« Time for Me to Climb
Close to Home »