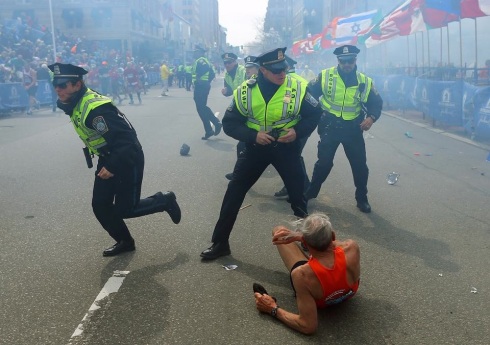 Words cannot express the tragedy of the events at yesterday’s Boston Marathon. Given my recent injury history, I probably will not be running any marathons anytime soon, but I have many friends who are avid runners. A couple of good friends finished last year’s Boston Marathon. One of them finished probably at close to the time when the bomb went off this year. A co-worker finished yesterday roughly 10 minutes before the bombs went off.

What happened yesterday is unthinkable, unfathomable, and unforgivable.

What these terrorists did (yes, terrorists) was compromise the trust of any mass-attended event. I doubt that any of the tens of thousands of runners even considered that a bomb could possibly explode during their experience.

Just this past weekend, I was lined up with 1,000 riders. We crowded together at the starting line, as you can see in the picture below. The mood was jovial, excited even. We were enthusiastic that we would be able to spend time together with a large crowd, doing something we all loved. The same was probably the case in Boston. In that sense, even though Boston is over a thousand miles away, the events of yesterday seem close to home. That could have happened anywhere.

It is hard to imagine that we could be considered targets.

After participating in numerous large-scale cycling events of this sort, I can safely say that the potential for terror never crossed my mind.

Now that this has occurred, the potential for tragedy will be at the forefront of every event organizer’s thoughts. You can bet that they will be canvasing the sidelines, making sure there are no suspicious boxes or anything out of the ordinary. I will not say that any good can come from the horrors that took place yesterday, but it will raise awareness. We will be watchful for threats, and more concerned with safety. Organizers will probably have more of an idea on how to contact emergency services if, God forbid, something were to happen again.

The most important thing is we cannot live in fear. In my opinion, what we should do now is mourn our victims, celebrate our heroes, and most importantly not be deterred going forward.

If I were a marathoner, I would go to Boston next year and run with purpose. I will attend other large scale events, mostly mountain centuries, and possibly one of the toughest road cycling events in the world. I will ride without fear. I encourage you to do the same. Don’t let this slow you down, literally or figuratively. We’ll be alright.

Like Loading...
This entry was posted on Tuesday, April 16th, 2013 at 12:30 pm and tagged with boston marathon, events, precautions, safety, terrorists and posted in Blog. You can follow any responses to this entry through the RSS 2.0 feed.
« Assault on the Carolinas, 2013, Brevard, NC
From the Hip to the Rib »