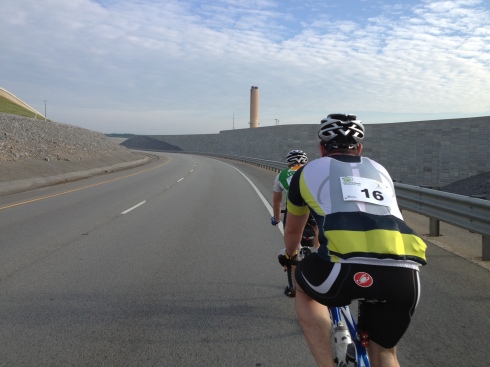 After all the harsh weather we’ve been dealing with, it was not comforting to see rain on the forecast for another Saturday. There was a lot of chatter in the days leading up to the event, but fortunately when we woke up that morning, there was hardly a rain cloud in the sky. It would be a day of ideal cycling weather.

This was the Tour de Midlands, one of my favorite rides in the area. I have fond memories of being a destroyer last year with a 21.5 average on the century route (ahem, with a lot of help). My expectations were far below that this year, just wanting to finish the 70-mile route respectably as my last tune-up before Mitchell.

There were plenty of familiar faces for the metric route. Jack Daniel and Kevin Lundy are good friends and strong cyclists. I decided I would try and hang with them as long as possible, but if things were getting tough, I wouldn’t hesitate to back off and either ride solo or with a slower group. I’m not in the same shape as last year, and don’t want to burn myself out.

As the three of us rolled out, we collected a large group of riders. As we crossed the Lake Murray Dam, we must have had somewhere around 20-25 riders, all pedaling together in a single paceline. That group thinned somewhat as we traversed through the hills along the eastern edge of Lake Murray. I was almost a casualty during that section, at some times hanging on for dear life.

On this day, I found that when I got to the front, I wanted to do my share and pull the group, forgetting that I’m still riding into shape. As we navigated some tough hills, I found myself at the front more often than expected. One problem is I tend to not slow the pace. That’s more me just being considerate to the rest of the group. I know it’s frustrating to get someone up front that slows everyone down.

I pulled us up a particularly challenging hill. As I saw my heart rate creep up, my legs felt like they were turning to putty. I nearly cracked on one hill. When I backed off to the rear, I felt much better. Then we were stopped at a light, and somehow when we resumed, I found myself near the front yet again. Ugh! Again, I nearly cracked on the pull, and had to back off. After a few other short pulls, I realized that I was doing myself no favors here, and went into wheelsucker mode. 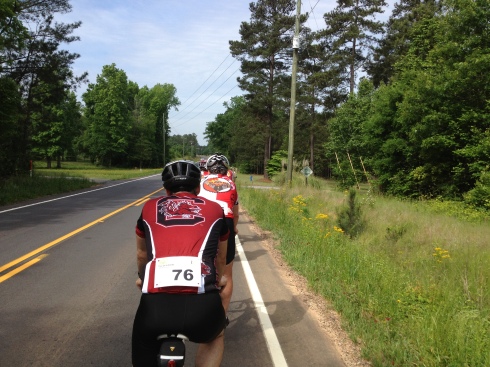 I was on wheelsuck duty in our strong group.

When we wheeled through the town of Chapin, the group was around 7-people, and it stayed that way for the majority of the day. It was a fantastic group! Kevin, Jack, Doug and Mike did most of the work up front. There was one instance where I was up front again, but the pace slowed considerably. The rider behind me politely nudged me to the left, giving me a break, and getting the group back at their accustomed brisk pace.

At mile 58, I was nearly done. After a couple minutes of quick refueling at a rest stop, the guys were ready to go. Knowing that I was in danger of bonking, and was already riding harder than I intended, I let them go. As much as I enjoy the company and the quicker pace, it was in my best interest to ride the rest of the way solo.

The last several miles are through some hilly sections of Lexington. As I navigated the up and down rolling hills of Windmill Road, I knew there was no way I would have been able to stick with the group. By bowing out early, I saved myself the embarrassment of being dropped.

By the time I rolled in solo, it was a gorgeous, sunny, 80-degrees. I was exhausted as I sat down to some BBQ, but still felt a sense of accomplishment after having passed another test. I’m ready to tackle the big one next week.

Kevin rolling into the starting line.

We started off with a massive paceline.

Near the front of a large group crossing Lake Murray dam.

Still behind the same wheels on the dam.

I was on wheelsuck duty in our tight group.

A quiet, pretty and brutal road.

Like Loading...
This entry was posted on Monday, May 13th, 2013 at 12:20 pm and tagged with chapin, cycling, lake murray, metric century, recovery, tour de midlands and posted in Rides. You can follow any responses to this entry through the RSS 2.0 feed.
« Strong Legs, Weak Bones
Mitchell Readiness Check »