Before I delve into this year’s Mitchell experience, let me backtrack a little bit. As I mentioned last week, because of this injury, it usually takes a few days to recover after a big ride, but it is unpredictable. Last week it took a little longer. With every passing day, I was getting more worried. By Friday, I was still sore and wondering if I should ride. This was looking more like a setback, which is the last thing I wanted.

I called my doctor’s office and spoke with his assistant, local running legend Eric Ashton. What I really wanted to know was whether this would hurt me in the short or long term. No, he said. There’s virtually no chance that this could do permanent damage. As for the short term, if it continues to bother me, then we’re heading toward a path of possible surgery. This ride would not change that. He did caution me that I may have to deal with some pain.

I decided to go forward, but made sure to get plenty of rest before the ride. That meant no riding. I would rather go into Monday with dead legs than a painful hip.

Monday morning arrived and the hip felt a lot better. It was good enough for me to confidently give it a shot. I had an anti-inflammatory with breakfast, and headed to the starting line.

5 minutes until it begins.

For a bike ride, Mitchell is a festive event. All of the 1,000 Mitchell riders and however many Marion riders all bunch up in front of Spartanburg Memorial Auditorium, occupying both lanes, watching the countdown on the big screen in front of us. It is an exciting moment when the clock hits zero, and the collective group sprints to start the ride. In a short time, large groups settle and the pace becomes manageable.

We started the ride in a dense fog. There was a chance of rain on the forecast, but according to the radar, it appeared the big storms would be east of Marion and Mitchell before we got there. Unlike the last two years, the weather was comfortable all day. We were fortunate.

It was a familiar refrain as we rolled through the early miles. There was one crash. Hopefully everyone was alright. I counted three stray bottles that our group carefully avoided. Aside from that, there were a lot of ‘SLOWING’ shouts, and even some ‘STOPPING’ on rare occasion.

My original game plan was to stop somewhat frequently, but game plans can be changed. I was feeling great, riding with a big group. Since I didn’t need food or drink, I continued to roll on.

As we made our way past Bill’s Mountain and through the rough rollers beyond Lake Lure, I decided to be a professional wheelsucker. I was just not going to pull. The fitness wasn’t there this year, and I would need every ounce of my energy for the climbs ahead. I stopped once at mile 65 for a quick refill, and had plenty of energy when I arrived in Marion after four hours.

Wow! That was far faster than I had expected or even hoped. If I could climb worth a lick, I would be on pace for under an eight-hour time.

It seems that I always underestimate Highway 80. It’s just a nasty, difficult climb. The grade is never punishing, rarely (if ever) reaches double digits, but it just seems relentless. After turning every corner, there’s something else waiting for you. Not much of anything is flat or easy on that godforsaken road.

I watched my breathing, careful to eat and drink as needed, and just make my way up the road. This year the mile markings were washed away. That might have been a good thing. Out of sight; out of mind. I plodded and creaked my way through the switchbacks, one by one, climbing very slowly.

The Blue Ridge Parkway sign arrived and not a moment too soon. That climb had her way with me, yet again. I saw Brian, a fellow blogger, sitting down, so I grabbed a nice patch of grass next to him. This was a first for me, but I needed to get my heart rate down, and psychologically cleanse myself of the horror I had just endured.

All in all, I spent maybe 15-20 minutes at that rest stop. Too long, but it was needed. I rolled up onto the Parkway to begin the long, gradual trek to Mitchell State Park.

The good news at this stage was that the hip didn’t bother me. Everything else was hurting, but that I could deal with.

I’ve always said that Parkway climbing is not that terrible. Often the grades are manageable in the 4-6% range, with occasional protracted sections at 8%. I certainly felt those steeper sections, and looked forward to the lower grades. After the climbing up to that point, a 4% grade almost felt like a flat road. 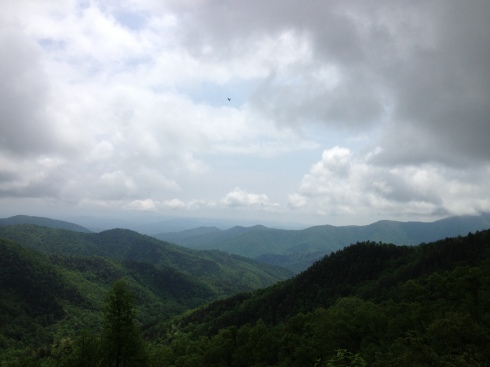 This was our view from the Blue Ridge Parkway.

The tough part about the Parkway climb is that it just goes on for an eternity. This is where I get into a grind mentality. I would struggle through each mile, knowing that I was yet another mile closer. Finally I arrived at rest stop 93. This time I had just a quick refresh and visit with my friends, then back up the hill.

The short two-mile descent was coming next. The weather was moderate, so I knew that meant it would be cold going down. No bother. I just jumped into it and felt fine. The legs were stiff for the climb back up, but eventually they remembered what they were supposed to be doing and started spinning again. Only this time it was different. The hip pain reappeared at the worst possible moment. I had 5 miles remaining and a hip that wanted to kill me. Tempting as it was, I would not stop before the end.

After briefly pausing at the entrance to Mount Mitchell State Park, I took a deep breath and headed toward the final challenge. The first two miles of the park are excruciating, just as my legs remembered. I looked down at my Garmin and it was showing a consistent grade at 8%. That’s it? My memory was that it was steeper, but that was enough, as it all hurt. The Garmin then showed 9%, then 10%. Even those 8% sections felt like 15% after what the legs had been through.

Lots of people were cramping, walking their bikes, or just stopping to collect themselves. I’ve always prided myself on not stopping on a climb (let’s forget that it has happened). I wasn’t going to stop today. During the steep sections, the hip pain was at its fiercest. It really did feel like something was cutting me as I climbed these hills. Perseverance always rules the day, and just by gutting it out, I got past the toughest part. The hip was shot, but I could still pedal.

The grade eases quite a bit, and even gets flat for a short while. We’re in business, I thought! My speed reached double digits for a change. I could sense that the end was coming soon. I passed a number of Penske trucks with drivers standing and watching us. I recognized one as Mike from Columbia. “You can do it Aaron. You’re almost there!” he shouted to me. He then paused and said “How’s the hip?” The honest answer was that it hurt like hell, but instead I told him “it hurts a little bit, but I’ll get there.”

Unfortunately, there was just one last pitch to deal with. Again, it’s a monster. Just when you think you think the end is near, there’s another steep slope in your way. My form was not pretty, but I made it up that one, just as I had all the others.

Around the corner was a parking space. I knew from memory that cones would be right behind it. They would point me to the finish line. Done! I am Done!

I rolled in, and beamed a smile (or a close facsimile given my exhaustion). I suddenly remembered my doubts earlier in the week, earlier in the morning, and earlier this year. It suddenly hit me that I had assaulted Mount Mitchell on the one year that I shouldn’t have. It felt amazing to do this again. Even though my entire body was aching and hip was throbbing, I still managed to defeat gravity and the mountain. I felt myself smiling as I saw the photographer. It was one of the best feelings I’ve experienced on a bike.

My official time was 8:24:56. We’ll call it 8:25. That’s the slowest time of my three events (8:05), (7:07). Even though I didn’t set a personal record, improve on last year, or whatever, I finished respectably. And I did better than I could have hoped. Out of all three that I’ve done, this one is the sweetest Mitchell for me.

5 minutes until it begins.

The early morning riding was in dense fog.

Still with the big group as we climbed Bill’s Hill.

And finally the 80 climb has ended.

Mitchell is just 16 miles away.

This was our view from the Blue Ridge Parkway.

This was the first tunnel on the Parkway.

Someone climbing the Parkway.