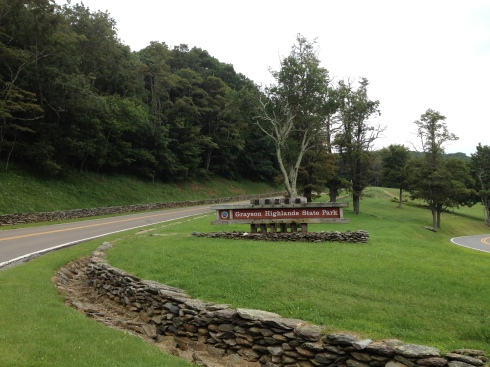 Since I would be up in the High Country a day early, I decided to make my warm-up ride a little more interesting. Usually I will spin for 10-20 miles before a big ride, just to get the legs fresh. This time I decided to do so at a state high point, Grayson Highlands, Virginia, which is about an hour north of Boone.

Since this is a warm-up ride for a mountain century, I didn’t want to overcook. The plan was simply to park at the visitor’s center, drop down to the entrance, turn around and climb back up. This isn’t my ideal way of climbing, sort of feels like cheating, but that was the plan.

As I drove up, I noticed that Highlands Parkway climbs to the base of Grayson, and the last couple miles are relatively steep. I decided to extend the ride a little bit, descend until the road becomes flat, and then turn around to climb.

The descent ruled. Just when you’re barely outside of the Visitor Center parking lot, there’s a view of 5,700 foot Mt Rogers. It didn’t come through on the pictures, but could be seen from the naked eye. I stopped for the photo op before dropping down the rest of the way.

The grade varies, but there are some nice, straight sections inside the park with 8-11% grades. I sailed down those until I reached the lighter grades at the bottom, where I had to keep pedaling downhill.

I turned left on Highlands outside of the park and continued the descent. This stretch had some tighter, steeper curves, which required a little bit of brakes, but it was still a blast of a descent. After a couple miles, the road straightened out and I expected flat. Nope. It was still dropping, although not nearly as steep. It was around the 2-4% range. I kept descending.

The road continued to gradually lose elevation. I was starting to get worried. By the time I turned around, this was going to be a long climb. Soon I was over 10 miles, and had descended over 2,000 feet.

As I passed 11 miles, the road began to turn up a little bit. Before I knew it, a dog darted straight at me. This was a big, white dog, and boy was he fast! He covered the few hundred feet from his house to my bike quick. The road had turned up enough to slow me down, so I whipped the bike around, and sprinted in the other direction. Instantly I was at 25 mph. I turned around, expecting him to be gone, but the guy was still chasing and barking! I yelled “NO!” and beckoned it away. He was within 10 feet of my rear wheel, charging hard before he finally gave.

As I drove by later, I looked for the dog and instead saw a huge “Beware of Dog!” sign. Noted.

Now came the climb, and it wasn’t too bad. The grade for those first few miles was easy, in the 2-4% range. This turned out to be great as I needed something to warm up my climbing legs. The real climbing began near the end of Highlands Parkway when the curves began. That started with a stiffer grade, and for a short stretch it was in the double digits before relaxing to 8%. I was careful to watch my pace and keep things comfortable, and chewed the miles away. 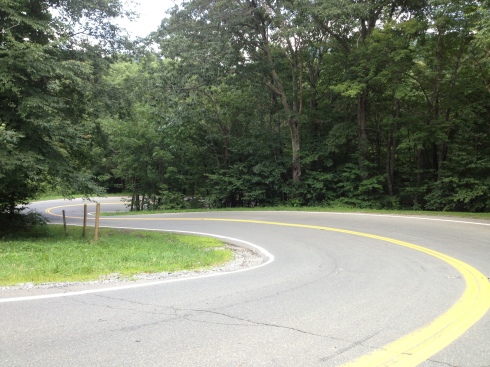 This is one of the tight Highlands Pkwy sections.

By the time I turned back into Grayson, the sun was out and the view was beautiful. This is a nice climb. The scenery reminded me of Brasstown Bald, only without the punishment. The early part of the climb was not too difficult. Around the middle, after the ranger station, it gets a little tougher. That long 8-11% section that felt so great going downhill didn’t feel as great now. Again, I took it nice and easy, and felt alright.

There is not a natural summit. The climb ends at the visitor center, and from there you can hike about a mile to two viewing points – Little Pinnacle and Big Pinnacle. I changed out of my cycling gear, and took to the woods. It was worth it. The overlooks were gorgeous, and afforded views of nearby Mt. Rogers, Whitetop Mountain, and others in the area. 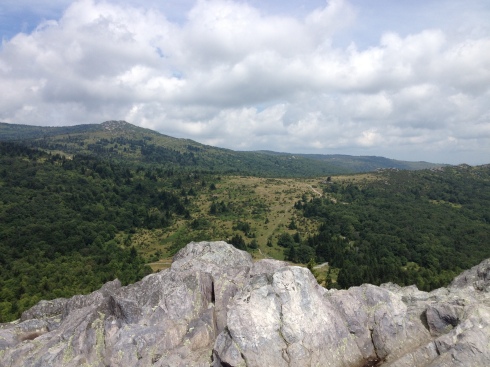 The view from Big Pinnacle. That’s either Rogers or Whitetop.

It turned out to be a good ride. And another state highpoint can now be checked off the list. I’m ready for the big ride tomorrow.

This is one of the tight Highlands Pkwy sections.

This was the only viewing opportunity.

Without a summit, I had to make do with the lookout.

Rogers is out there in the distance, although probably not visible in the image.

This was the summit. Not too exciting.

The view from Big Pinnacle. That’s either Rogers or Whitetop.

The view from Little Pinnacle.

Like Loading...
This entry was posted on Saturday, August 3rd, 2013 at 7:16 pm and tagged with big pinnacle, climbing, cycling, dog, grayson highlands, mount rogers, mountain, virginia, whitetop mountain and posted in Climbs. You can follow any responses to this entry through the RSS 2.0 feed.
« The Birthday Ride
Boone Gran Fondo, 2013, Boone, NC »