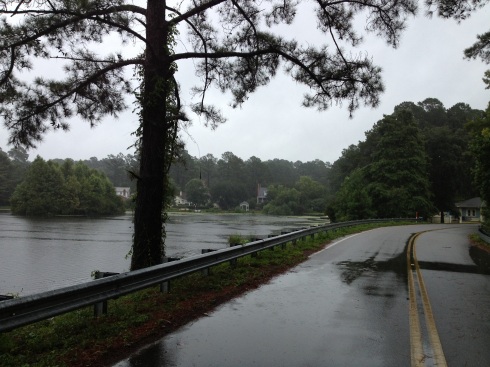 EDIT: You can disregard most of this post. The heavy rains moved eastward and the forecast looks a lot better. I drove up overnight and will ride.
The Blue Ridge Breakaway has not been officially canceled, but it has been for me and a number of other riders I know.

As anyone living in the southeast knows, rain has been a killer this year. Just when we think we’ve had our fill, another big system comes right along. This time we have a couple big systems passing through, one of which has been punishing us today, and another that’s lurking behind it, threatening tomorrow’s festivities. You can see both of them in the image below. 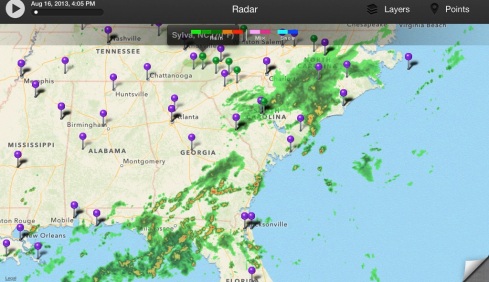 For those of you who choose to ride tomorrow, whether on the Breakaway or elsewhere, be careful! You can talk about Rule #9 as much as you want, but safety is paramount. There are a couple things to watch out for. First off, the temperature is going to be unseasonably low at 65 degrees in the valleys, and colder in elevation. By adding some heavy rain, the temperatures will be even colder. If someone decides to brave it and ride up to 6,000 feet, they could risk hypothermia. Not to mention, visibility and stability decreases. We don’t want people to get hit by cars or ride off of mountains.

Zeke, the Blue Ridge Breakaway ride directory, posted some useful details on his blog that you can read here. Even though the ride is going to go on, you can see from his post that they have contingency plans in the case of bad weather. They are also hopeful that at least some of the weather will miss them.

From my research, the most accurate forecast that I’ve found is showing about a 60% chance of rain at the start of the event, with slightly increasing chances later in the day. The threat of thunderstorms comes later in the day, which makes things even trickier because that’s when people could be riding on the Parkway.

As for me, the decision was difficult. This was the one century I was really looking forward to revisiting. Next year will probably not be an option because of Haute Route, but I will return someday. As much as I want to participate, it’s hard to justify all the preparation and travel just to ride 7-8 hours in the rain. That is not my idea of fun. On top of that, I’ve been fighting a cold and injuries, all of which could get worse. This is a tough decision, but the right decision.

I’m sure many brave souls will give it a shot. The organizers are going forward as planned, “Rain or Shine,” as Zeke says. I implore all the riders to be careful with their body, and that the volunteers and organizers be mindful abou people’s safety. Everyone can learn from an event earlier this year where we lost someone in harsh riding conditions. I have the utmost respect and trust for those behind this event, but things can happen.

As for me, I’ll be on the trainer watching the dumbest movie I can find.

Like Loading...
This entry was posted on Friday, August 16th, 2013 at 4:50 pm and posted in Blog. You can follow any responses to this entry through the RSS 2.0 feed.
« Riding With Steroids
Blue Ridge Breakaway, 2013, Lake Junaluska, NC »