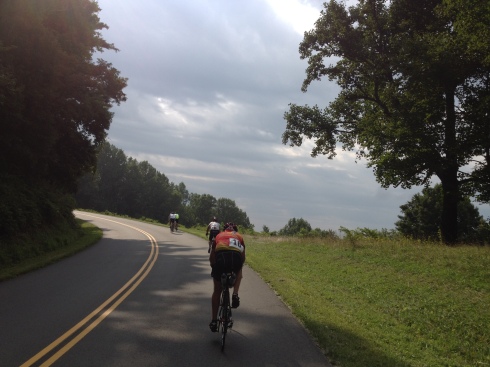 I’ll talk about the injury in more detail when I get some new answers, probably sometime next week. However, I know for certain that it will prevent me from completing the remainder of my fall schedule. That includes the upcoming Blue Ridge Parkway trip that I had been training for.

Good News: I am still going. Instead of riding, I’ll be participating in the camp with the 10-12 other riders, staying in the same resorts, eating the same food (albeit not as much), and traveling the same roads. The primary difference is I’ll be doing it via car.

One thing I had not yet mentioned is that awhile back, I pitched an article about the experience to Blue Ridge Outdoors Magazine. They liked the idea, and hired me to write a feature article. Since I’m not riding, the article will still go forward, but the focus will be on the other participants.

Cycling the entire Parkway in six days is ambitious, but driving is not. I’ll have a LOT of spare time. I’ll probably help the riders to some degree, but to fill the time, I plan to immerse myself in the Parkway. I’ll stop to see the stuff that I normally would ride right on by. I’ve already purchased and skimmed a book about the Parkway, and will probably pick up another before the trip. In a way, this will be an educational trip, while also a retreat into nature.

Blog updates will become more frequent during that week (10/6 – 10/12). Depending on wifi availability, there might be one a day, possibly two. Versions of those entries (most likely abbreviated) will also be posted on the Blue Ridge Outdoors blog.

While it is disappointing not to be able to cycle the Parkway, I’m actually pretty excited about this trip. One of the tougher things about being injured is being cooped up for so long. This will get me out of the house while I recuperate, and I’ll learn a lot during the process.

Like Loading...
This entry was posted on Friday, September 20th, 2013 at 5:12 pm and posted in Blue Ridge Parkway. You can follow any responses to this entry through the RSS 2.0 feed.
« Tour de Paws, 2013, Spartanburg, SC
Blue Ridge Parkway, Stage by Stage »

3 responses to “A Different Parkway Experience”