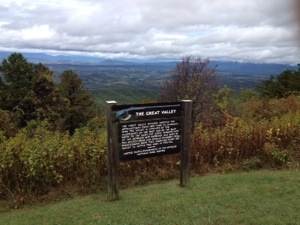 (Sketchy wifi at our lodge tonight. Another photobomb will be coming soon.)

Day two started a little later than planned, but that was actually good news. We had been agonizing about today’s forecast all weekend. Monday was the day we were worried about because the remnants of Tropical Storm Karen were heading this way. Some weather agencies were reporting 100% chance of rain, others in the 70-80% range. Whoever we listened to, we were fairly certain that the riders were going to get wet. When we woke up this morning, we were surrounded by thunder and lightning. Everyone became understandably nervous, and there were fears that we would have to modify the route, or at worst, skip the day altogether.

The pro tip of the day came from Christian, who reminded us: “If you’re already wet, you’re not going to get wetter.” True dat.

We all had our laptops, iPhones and iPads out, measuring radar forecasts. There was a huge chunk of green and orange that blanketed the southeast. The question was where specifically would it go? As time passed, we noticed that it was heading eastward, with the worst of it pouring over our heads. We made the call to leave at 11am, an hour later than the scheduled time.

Today was going to be one of the tougher days, with 98 miles of riding and 12,000 feet of climbing.

Since the resort was 9 miles off the Parkway, half of which would be uphill, riders had the option of riding or getting driven to the top. Three chose to take the free ride. Can’t say I blame them. The rest, including the two pros, went up the hard way.

The rain stopped, and the ride began under a light mist with wet, autumn leaves and various branches scattered along the road. The fall colors and the rain combined for some spectacular scenery as we rolled up and down before descending to Roanoke.

As the descent began, the sun came out and the temperature rose. Everybody worked together through the mostly flat terrain as we skirted around Roanoke, Virginia. I was looking forward to a side trip up Roanoke Mountain to get a view of the city, but alas, it was closed from the shutdown.

Flats are rare on the parkway, and we knew this one would end soon. The only way out of the big city was with a climb, and what a magnificent climb it was! So far, this one was the crowd pleaser. It wasn’t terribly steep or long, and for those that looked, there was some stellar scenery. The best view was about midway through the climb, where we got a distant view of the city of Roanoke from the sky.

Once back in elevation, the personality of the parkway changed. While there were a few scenic vistas, most of this was hilly farmland, with agricultural houses, both new and some very old. Terrain was rolling, but the climbs weren’t big enough to split the two groups up by too much. There were fewer overlooks on this stretch, so most of the riding was like any country road in the mountains — pleasant, if not awe inspiring.

After a few scares yesterday, people felt a lot better today. The temperature was more moderate, which helped, and I think people took extra measures to keep the cramps and exhaustion at bay. They learned from yesterday’s struggles. Brian made some bite size potato snacks with heavy salt that really seemed to hit the spot. The major difference, I think, is that people just got more comfortable climbing. Some of these guys simply don’t have the opportunity to climb where they live, so they had to work into a rhythm to get their climbing legs.

The last leg was to Rocky Knob, and it was more of a struggle – a little up, a little down, while gradually increasing elevation. As we got closer, there were some nice views of the valley floor to the west, and mountainous greenery to the east. A couple of these last climbs were longer, and we ended up at the highest elevation of the day, around 3,200 feet. Even if today wasn’t terrible, those last few miles helped everyone sleep better.

Two days down. We’ve traveled 174 miles on the Blue Ridge Parkway. Not bad, I’d say. Even though today’s ride profile looked tougher, everyone agreed that this was a good day. Naturally everyone is tired, but there is a sense of confidence in the air. To be honest, I thought that completing the parkway in 6 days was ambitious, and that some might not finish. After today, I’m beginning to think that everyone will continue riding until Cherokee.