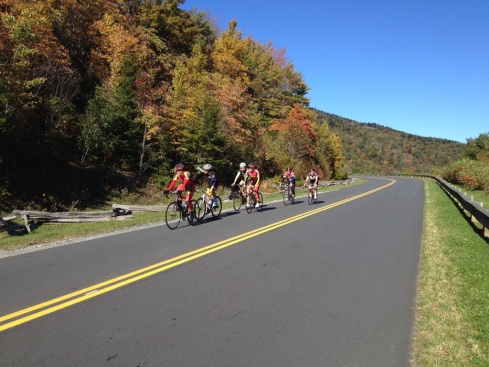 Again, we started the day with cool temperatures and sunny skies. We hit the parkway climbing, as the first order of the day was getting to higher elevations. We climbed up to Stone Mountain and then Doughton Park, and ended up nearly 1,000 feet higher than we started.

As we climbed, the parkway changed character again to become a ridgeline road with breathtaking vistas as we turned every corner. We could see the foothills to the east and lush, green valleys to the west. As we rode along the ridgeline, we were again protected by the distinctive stone structures that line the parkway’s bridges and overpasses. From first few miles and few hundred feet in the air, it was clear that this would be a day to get acquainted with the sky.

As we got closer to the High Country, I was finally in familiar territory. I have ridden the area north of Boone a couple of times, and I remember it as being rural and agricultural, just like the stretch from Roanoke to the NC state line. I guess my memory wasn’t too reliable, as this part had a lot of scenery, just mixed in with rural life. There were distant views of Mount Jefferson, Boone, and we could even see Grandfather Mountain.

The groups split up this time. Bobby and Christian, our resident pros, took up with Guy and Will, and made them work hard to the second rest stop. Not too far behind were Steve and Chuck, who both did extremely well, especially since they rode as a twosome all day. The latter few were Wes, Julie and Nancy, who rode great, but also took some time to enjoy the scenery.

We were in for a treat as we entered the High Country. Even the overlooks just north of Blowing Rock were magnificent. As we crept higher in elevation, the fall colors were closer to peak.

The real treat was that 8-mile section from Blowing Rock to the Linn Cove Viaduct. The road follows the ridgeline, with several suspension bridges that tease the viaduct, but still don’t compare. The colors were absolutely stunning. I’ve seen Grandfather Mountain a few times, but it has never compared to how it looked today.

There was still a little climb in order to get to the Viaduct, which my memory is that it’s a little steeper than most parkway climbs, probably in the 7-8% vicinity. The front group attacked the climb like a beast. Bobby and Christian fought it out for awhile, but Bobby worked hard and dropped everyone.

They regrouped afterward and climbed the Viaduct together. I watched them cross the viaduct, poised to take some pictures. As they passed me and rolled onto the bridge, I could hear Steve shout about how amazing it looked. While I haven’t shouted, I know the feeling. Cycling on that thing feels like walking on air.

From then on, it was mostly downhill until we arrived in Linville Falls. Hopefully we can find the actual falls and gorge before we leave. For now, we’re resting.

(Not many pictures now because we have no wifi. More coming later.)