Not long ago, Michael from The Good Ride approached me and asked me to write something about camaraderie and charity rides. I agreed, and at first wasn’t sure what to write. Once I got my muse, the words just poured out of me. I was surprised by what I said, but in a good way. This may be the best thing I’ve ever written, and based on early reaction, it seems to have clicked with people. I think most people who participate in charity rides, from either the organization or riding perspective, should identify.

I recommend you click over and give it a read.

One of my conclusions from the article was that, because of all my charitable efforts, I’m happier now than I was a few years ago. Not much else has changed. I have the same job, earn roughly the same amount of money, and have the same wife. Even though this was not a surprise, it’s not something one asks oneself. I don’t take daily, weekly or yearly inventory of my happiness.

That brings me to Anita Mac, who was not happy. In fact, she was so unhappy that she committed suicide. 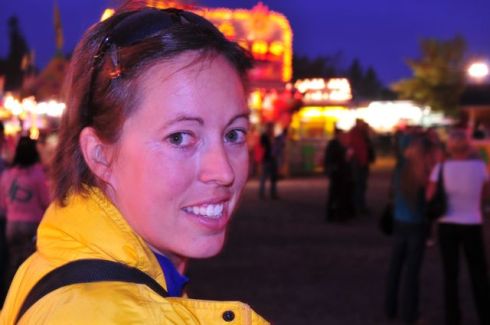 I came to find Anita when she found me. She ran the blog Travel Destination Bucket List. The topic was strictly a travel blog, not exactly like this blog, but she cycled at some of her destinations. She was more of a touring cyclist and didn’t blog about it often, but I came to enjoy her blog. I subscribed and armchair traveled through her.

Aside from a comment or two on her blog or mine, I never got to know Anita personally. All I knew about her was what I read and the pictures she showed. She was always smiling, usually beaming with happiness. I found myself often envying her. From the exterior, she seemed to have what everyone wants.

I’m not privy to everything that led to her fateful decision, but from reading her last couple of blog postings and some things elsewhere, it sounds like it was a relationship problem. She loved to travel, but did not have a companion to travel with. That made her travel miserable, and when you take away her passion, there’s not a lot left.

When I learned the news, I was shocked. Even though I didn’t know her, this was the last thing I expected from her. I would be shocked at anyone’s suicide, but especially her because of that outward appearance that she kept.

That made me think of myself. A lot of people read about my adventures on this blog, but they know me about as well as I knew Anita Mac — not well at all. From the words I write, they probably think I am a happy, enthusiastic person, which I am, but everyone is human.

I’m not going to deny that cycling is such a passion for me that it resembles an addiction. The same was the case with Anita’s travel. When you take away the addiction, there has to be something to fill that hole to keep us going, otherwise we will fall.

Without knowing Anita’s particulars, it is clear that she didn’t have anything to support her once she lost the ability to travel. I’m sure the relationship troubles didn’t make it any easier.

Over these last 18-months, I’ve had no choice other than to hang up the bicycle cleats and spend some time on the couch. I’ll admit that the first time I was off the bike, winter of 2012 and spring of 2013, was not the best of times. I would go so far as saying I was depressed and angry. There were other contributors, but at times I did not handle my sequestration well. I was nowhere near as low as Anita Mac, and never was close to contemplating such a drastic action as suicide, but I would not have called myself happy.

The moment I got back on the bike, I felt instantly better — even better than I had before. Probably because things had been so dour, I felt like I was on top of the world. My completing the Assault on Mount Mitchell last year ranks as one of the best feelings in my life. There were plenty more of them. Even though I had a few setbacks, I was able to enjoy an active season and tell many stories.

When the injury returned, I remembered my plight from earlier this year. I knew that I needed something to fill that void, and I found it. I continued to help others, albeit from afar, and I made plans to contribute to the rides that I enjoy, although this time as a volunteer and not a rider. I also found plenty of other activities to sidetrack me. Believe it or not, I’ve actually enjoyed this extra time. I spent some time with my wife, took a nice trip, and caught up on a lot of old movies I had missed.

Unlike the last layoff, I have remained happy. This time I should have had an even tougher time because the pain was worse, and I had to deal with surgery. This time I’ve kept a positive attitude and that has made the difference.

Sure, I’ve had bad days, which usually coincided with extreme pain or the inability to do something. Last Friday was one of the worst days I had because of some stomach and pain medicine disagreement issues. Everyone has bad days. The difference between a happy person and an unhappy person is that they can get past the bad days and not let them linger. It seems like Anita was not capable of this, and regrettably, she did not find that travel partner that she needed. The ending was a tragedy.

So, my message to you, whether you are a cycler, blogger, or other type of adventurer, is not to get caught up in an addiction to such a degree that you lose touch with what makes life great – relationships, love, charity. Everyone can find happiness, just some people have to look harder than others.

Like Loading...
This entry was posted on Thursday, February 13th, 2014 at 2:05 pm and posted in Blog. You can follow any responses to this entry through the RSS 2.0 feed.
« One Week Down: Progress, Patience, and Positivity
Week Three Status & Secret Mission »

8 responses to “On Happiness”