My Wife’s On Jeopardy, Baby 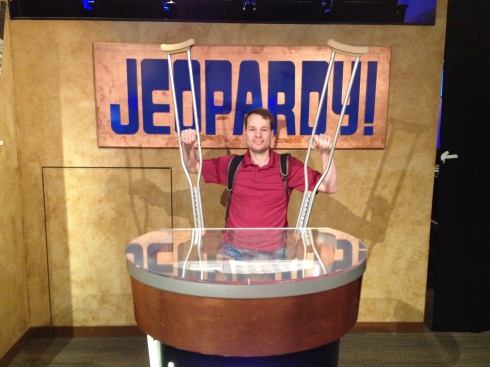 Warning: This post has absolutely nothing to do with cycling, but it is far more exciting than any of my physical triumphs.

As I mentioned recently, since this blog is so hyper-focused on cycling, I find little time to share much about myself, the proprietor. This seems like a good opportunity.

My wife has taped on the Jeopardy game show. I am not legally allowed to say how she performed, but I can say that it ranks as one of the most exciting (and nerve-wracking) experiences of my life.

Allow me to backtrack a little. I’ve mentioned recently that I’m a snob film buff, with some collegiate work in film studies (technically a cognate due to scheduling issues).

I met my wife at a film festival. Our first “date” was at a weird movie where a disturbed individual sticks a live chicken head in his mouth for pleasure. Yeah, weird, and we didn’t really know that going in. Our second date was about an elderly painter who finds a healthy, young subject in Daniel Craig (pre-James Bond days). Let’s just say that her paintings were of rather graphic acts that she performed on him.

The two movies are The Mudge Boy and The Mother if you’re interested in weirdness.

She now teaches English at a local college. She’s a smart cookie, with a German and French undergrad and a Linguistics masters degree. She also has a thing about borders. When I take my cycling trips, she likes to know where any border crossings are. When I rode Clingman’s Dome, she thought it was the coolest thing that the road straddles the line and crosses over between NC and TN several times, even if does not have state signs. She’s also into currency collection, collecting foreign and hyperinflation notes.

She’s an interesting, unique, lady, and I’m glad I married her.

We’ve been fans of Jeopardy for years, and she always does pretty well. The more you watch, the better you do, and she can now pretty much wipe the floor with me and probably most people I know. One day she got the wild hair to take the online test. She passed and later auditioned, and much later, we found that she made the cut for the show.

As I’ve documented all too well on this blog, I had surgery scheduled for 1/31. We got the news about the Jeopardy acceptance shortly before that, and I had to travel during my recovery period. It wasn’t easy, but I wouldn’t have missed it for the world.

As for what happened, the ten pages of legalese has sufficiently scared me into saying anything. I can say that her show will air on June 16th. She may or may not have done well, and I may or may not have begged her to buy me a new bike. Either way, we’ve decided to have a viewing party and, regardless of the outcome, will have plenty of fun stories to tell.

I do love her, and crutches or not, I was glad to support her for this exhilarating and stressful ordeal.

One odd coincidence already is that her air date is the same day that my temporary handicapped sticker expires. We have joked that even though she is going to be on national television, that I’ve somehow made this about me. Hopefully I will be up and around, walking and riding, and able bodied to help her celebrate (or not) her moment in the sun.

Hopefully this had a happy ending. We’ll be able to tell you in a few months.

Like Loading...
This entry was posted on Sunday, February 23rd, 2014 at 10:07 am and posted in Blog. You can follow any responses to this entry through the RSS 2.0 feed.
« Things I Learned Post Surgery
One Month Out »

11 responses to “My Wife’s On Jeopardy, Baby”