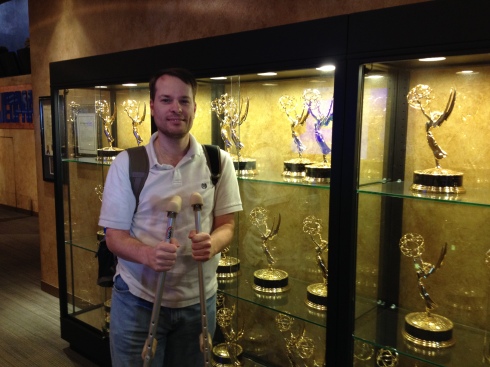 Now I can finally tell the story (or stories) that I’ve been waiting to tell for months.

We got the call for Andrea’s Jeopardy appearance about two weeks before my surgery date. We would have to leave during my 3rd week of recovery. That was going to be a challenge, but we weren’t going to say no. This was the opportunity of a lifetime for Andrea, and for me. They could have removed my legs, and I would have still come out to support her.

Needless to say, I was in plenty of pain. I made it through the 5-hour cross-country flight thanks to some pain meds and an accommodating flight crew. I had to get up every hour or so, which did help keep me from stiffening up. It was still miserable, yet knowing how anxious my wife was about her upcoming appearance, I tried to keep that to myself. I mostly succeeded.

We arrived in Culver City a couple days prior to the taping. We figured it would be smart to adjust to the West Coast, rather than fly in immediately to tape (which a lot of others did). As already mentioned, we took a sojourn to North Hollywood. We also visited Hollywood and the Sunset Strip, and went on a wild good chase to find the Hollywood sign, which we probably couldn’t have seen with me on crutches anyway.

Jeopardy arranged for the contestants to stay at the same hotel. The shuttle arrived for them at 7:30am, and the guests had to show up at the studio by 10:30am. On that first day, I crutched my way to the waiting room with the other contestants. I was the only spouse who did that, and I was in pain, so I am giving myself extra husband points. It was odd watching these dozen or so contestants, all appearing nervous, sitting at separate tables in the lounge area. A couple people talked to each other, while others kept to themselves. We didn’t know that the person sitting closest to us would be the champion that would face Andrea. That person will remain nameless.

As Andrea recounted later, the anti-sociality would fade as the contestant pool were essentially sequestered together for the entire day. They spent their morning getting preached to about the legalities (which is part of the reason I have been so quiet about the actual events of the show); they would rehearse together, lunch together, and spend their idle time together. These were all smart, interesting people, and I got the impression that they bonded a little bit. Of course, once on the set, they were sportingly competitive.

Having those extra few hours helped me immensely. I would get ready, take some of my pain pills, and the hip would feel comfortable enough by the time I needed to head to the studio. 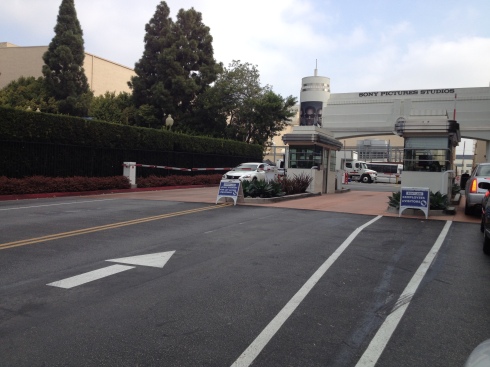 The entrance to the studio.

When I got there, I found a couple of benches, where ‘contestant guests,’ ‘production guests,’ and audience members would line up, waiting to be escorted inside the studio. As a ‘contestant guest,’ I had a little blue sticker on my shirt identifying me as such. Everybody was extremely friendly, and since I had someone on the show, they asked lots of questions about her and planned to root for her when she got on camera. Everyone was extremely friendly. In fact, my first morning there, someone randomly bought me a Starbucks coffee. So even if Andrea lost, at least I had that. Thanks!

Fortunately I did not have to walk. The set was about a mile away, which would have killed me. Instead I met Sonny, one of the pages on the set. He was my chauffer for the duration, and was a terrific guy. He took me everywhere with his golf cart. Sonny was my savior, and when it was all over, I joked that I would name my first child of him. 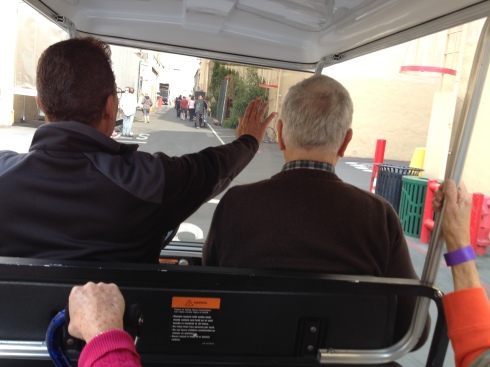 Sonny waving and driving. You can see the audience ahead of him, walking to the studio.

Sitting in the studio chairs was not entirely comfortable, but could have been far worse. I made it a point to get up after every show, which, as you know, was roughly 30 minutes, although sometimes they would run a little longer if judges needed to check on things, or if clues needed to be re-read.

The ‘contestant guests’ were all seated in the same section, and the section to the right across from the stairs was empty. I figured that would eventually be audience members. The Jeopardy staff then informed us of the rules. They said that no matter what, we could not look at or make any contact with the contestants. Before the first show started, they came out, single file, and filled the seats across from us. I saw Andrea walking up toward the rear, and she had a shell-shocked look. I could tell she was nervous. It was tough to not wink, nod, or give her some encouragement, but I wasn’t going to tempt fate. Sonny later told me that one time a husband had walked over to his wife, given her a hug and wished her good luck, and the contestant was disqualified. This may have seemed harsh, but they just wanted to make sure the contestants were not compromised.

I had no idea when Andrea would be on, who she would play, or anything. I just sat there and watched. The shows that I saw were the ones that will air beginning tomorrow, with Molly as the two-time champion.

Watching the shows was a lot of fun. They had a hilarious introduction that combined Jeopardy and Wheel of Fortune outtakes, and included comedic parodies, such as from Cheers and SNL. During commercial breaks, Alex would talk to the crowd and he was a genuinely affable, and often funny guy. Sometimes he was a little rougher and cheekier than he is on the show, and that was refreshing. It was as if we were seeing a special side of him. People would ask him questions, and he usually had some sort of cute quip in reply. One thing I noticed was that he would seldom get questions from the ‘contestant guest’ side, and he would hardly even look in our direction. I cannot speak for all of them, but I was a bit distracted with the idea of my wife being on the show, and my head wasn’t clear enough to think of a clever question. Even though everyone in our section was nervous, we were all friendly and shared each other’s “getting on Jeopardy” stories.

After three games, we broke for lunch. Andrea still hadn’t been on. When we returned the studio, I was sitting next to someone else’s spouse who also hadn’t been on, but he was at the podium answering questions. Then he and others subbed out, and all of a sudden Andrea was up there doing the same. Was she going on next? As it turns out, she didn’t. That was just them rehearsing. In fact, she didn’t get on that day, and neither did my audience companion either. They were the only two who didn’t get on, which agitated us both. Since I was in pain, I was frustrated knowing I would have to come back the next day, but again, I internalized it.

When Andrea got out of the studio, she was in a good mood. As she was putting her suitcase on Sonny’s cart, a familiar face walked by. She didn’t notice, but I immediately recognized him. “That’s Adam Sandler,” I said, quietly to myself. “Get out!” she responded. “Don’t say anything,” I whispered. I had seen many celebrities when I lived in North Hollywood, and never bothered them. I think Adam Sandler appreciated that, as he had just played basketball and looked tired.

I think it turned out for the best that Andrea was able to watch an entire day’s worth of shows. I cannot say whether she wins or not, but I did notice the nervousness had abated that second morning. As luck would have it, Andrea would be on the first show that morning. By that point, my pain was no longer a concern. I could have sat there all day. I could have stayed for weeks to come. Once she was on the show, it was surreal and nerve-racking watching her, but I rooted for her with every fiber of my being.

Like Loading...
This entry was posted on Sunday, June 8th, 2014 at 3:54 pm and posted in Jeopardy. You can follow any responses to this entry through the RSS 2.0 feed.
« Personal History: North Hollywood Days
We’re on Deck »

7 responses to “My Jeopardy Experience”