When I was sitting in the Jeopardy audience and first saw Andrea standing up there, my thoughts turned to number crunching. Probability and statistics is part of what I do for a living. I did some math in my head to try to figure out the chances of actually making it on the show and winning. I knew that 100,000 take the online test, and only 3,000 are selected for an audition. Of those, only 400 make the show. For that reason, it’s a major achievement to even make it there.

What about the chances of winning? There are three contestants, which means if all things are equal, you have a 33% chance of winning. Since you are always going to be the challenger, you’ll always face someone formidable. That reduces the chances. You could even end up facing someone like Arthur Chu or Julia Collins. In the 20 games that Julia just recently won, 40 people lost. Those 40 people are just like Andrea. On top of that, there has to be friendly categories. Not everyone is strong everywhere. There are some topics that we were hoping to avoid, like Opera, Physics, Shakespeare, Biology, etc. My rudimentary guestimation was that after making it on air, you had roughly a 10% chance of winning. That means that of all those who apply, the chance of winning is a fraction of a fraction of a percent.

This week we re-watched a series of episodes that we saw live in one day, several months ago. When we arrived at the studio, Molly was the champion with two wins. She won two more, enough to get people talking. Just the other day, someone emailed me saying that “she hoped Andrea thrashes Molly.” I had to remain quiet, knowing that Molly would be gone before Andrea’s turn came.

And then came Katie.

Katie was super sharp, and she had some things in common with Andrea. What’s more, Andrea liked her. They sat together for some of the games. They both had some international experience and interests, and both were into pop culture. Katie does embroidery of comic book characters. Seriously, how cool is that?

Of course, sitting in the audience, I had no idea who Katie was. I would learn all this later. It was immediately clear that she was a formidable contestant, and she played tough against Darren, and they were neck and neck going into Final Jeopardy.

Katie and Darren had a pop culture clue. The answer was Walking Dead, which seemed pretty easy for a Final. Everyone got it right, but Darren, perhaps not confident in his pop culture knowledge, didn’t bet enough. Katie swung for the fence, and ended up with a big payday. Congrats, Katie!

The next day was Katie, Shelby and Whitney. Katie got ahead, and then Whitney went on a roll in Double Jeopardy. He was strong across the board, but was especially proficient with science questions. He surpassed Katie and had a slight lead on her in Final Jeopardy.

The question was about the last ambassador to a country in 1979. Anyone who had seen Argo might have made the connection to Iran, but everyone missed it. Katie bet roughly half her money, enough to stay within contention. Whitney picked Zaire and bet the farm. Whitney lost. It was a brutal loss. 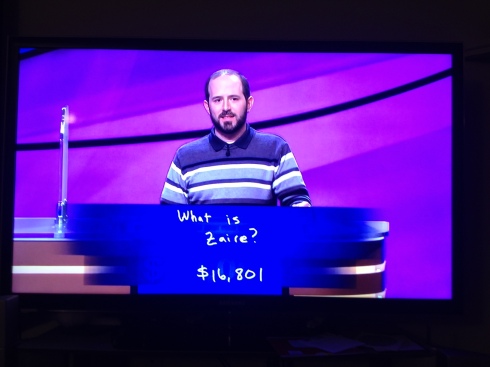 Andrea and I were relaxing at the hotel bar later that evening, reflecting on the entire day and the experience, and wondering when she would go on. I then said, “I feel bad for Whitney after that tough loss.” Andrea motioned that he was sitting behind us, hunched over the bar, drinking alone. I got the attention of the waiter, and asked him to buy Whitney a drink, whatever he was drinking. Whitney appreciated it and came to talk to us for a bit. It was clear he was bummed. “That one’s going to stick with me for awhile.”

As I watched the heartbreaking defeat again, I searched for Twitter reactions. This one says it all:

WHITNEY, YOU'RE SO STUPID. OMG I COULD SLAP YOU. YOU WERE AHEAD BY 2000. #Jeopardy

That was harsh, but true. Whitney could have won, but he had to assume that everyone knew the answer. Katie played it safe. Wagering is such an important part of the game, and while some have devised formulas for it, there’s no way to really know the correct amount to wager.

At that point, we didn’t know whether Katie would face Andrea. Even though we wanted to get it out of the way, we sort of hoped not. Katie had a lot in common with Andrea and would take away some advantages. On top of that, she was pretty cool. Of course we still wanted to win. Who doesn’t? But we wanted to beat someone else.

It was bittersweet when I learned that Andrea would be up first. As I saw her at the podium standing next to Katie, my heart started to beat faster. It was surreal. This was my wife. Moreover, this was the person I share a bank account with. Sorry, Katie, but we wanted to win.

So, the question is, would our fate be sealed by the overwhelming odds against us, or would the Whitney bourbon give us some good karma?

We will see on Monday.

See you on Monday, Katie.

Like Loading...
This entry was posted on Saturday, June 14th, 2014 at 11:55 am and posted in Jeopardy. You can follow any responses to this entry through the RSS 2.0 feed.
« My Jeopardy Experience
VICTORY!!! »