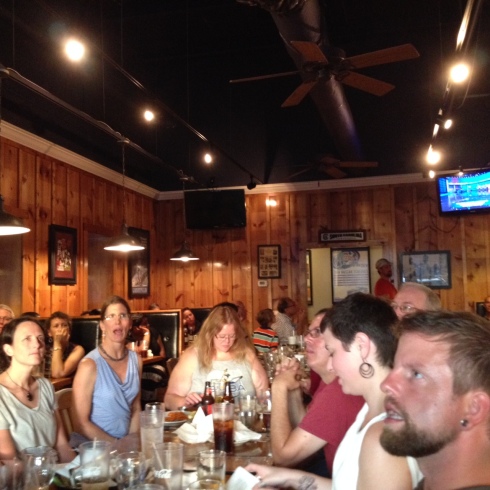 The Before Picture. Will she get it?

To be honest, I had forgotten a lot about the episode. But I remember how Andrea started slow, came back strong, and bet big when it counted. The jubilation I felt at the moment when we realized that Andrea was a champion was something I have never felt before. It wasn’t just that she won, but HOW she won. I wanted others to feel that same way, or at least close to it.

After the win. There was a lot of movement so pics came out blurry.

We knew it was going to be a dramatic finish, and we knew that the way it unraveled was going to be a crowd-pleaser. We decided to have a little viewing party to celebrate the occasion. All the while, we kept the results to ourselves. Even the local newspaper article commented on Andrea’s poker face. I maintained that same face here and elsewhere.

We invited quite a number of people, and received a lot of RSVPs in return. It was actually a surprising, staggering figure. We knew there were going to be 100, but toward the end, it appeared that it could approach 200. It turned out to be a good thing that we didn’t get that many, because I’m not sure the restaurant could have handled it. My guess is that the final tally was over 150, and we overflowed outside of the big room that you see filmed.

The local ABC news affiliate showed up to capture the moment. They were always around, and captured the finest moments, the lows (missing the Daily Double) and the highs (the big win!), and the higher than highs — a Jeopardy Champion celebrating with a bottle of Dom Pérignon!

They asked us to give an interview before the episode. The only problem was that the majority of people were coming in at the same time they wanted to film, but we had to talk about stuff that would air on the 11pm newscast — specifically the outcome that we didn’t want to spoil! At first we tried in front of the restaurant. That was a bad idea since people kept coming in. Instead we moved around to the side of the building where there was a little more privacy, although we still had to stop a couple times. The downside was it was 95 degrees and the sun was in our eyes.

Here is the ABC article and video. This does more justice than any of my words can. Please view it if you really want to see the excitement of the night.

Andrea snuck in a bottle of Dom! Woohoo!

The guest list was a combination of a few different groups. Of course there were cyclists, a couple of whom rode to the party. I had a lot of friends from work come, and Andrea had many of her closest personal friends and teaching colleagues.

This was the best bike rack Scott could find.

The fact that we kept everyone in the dark really made the party work. A lot of people thanked me for not saying anything. There were people at the party that we could have told (family, tax attorney), but we wanted to keep the spoilers under wraps. We wanted the crowd to have that same feeling that I had on that February day that seems like ages ago. 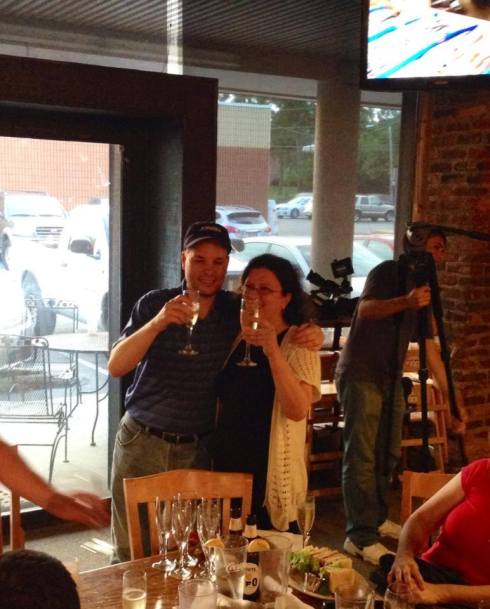 Andrea continues playing tonight, which in reality, took place 10 minutes after that monumental and stunning win. In the meantime, she’s been speaking with other media outlets who may be publishing articles soon.

2 responses to “The Viewing Party”