I’ve talked plenty about my bone density issues and speculated where they may have come from. We may never know completely why and how this came about, and what place it had in the perfect storm of the freak injury history of the last couple years. From now on, this is the going to be not just the primary focus of my recovery, but a major focus for the rest of my life. More on that and how it will impact my next few months in a moment.

I’ve posted this New York Times article ‘Is Bicycling Bad For Your Bones?’ before, but it is worth revisiting. The topic is controversial. I’ve talked to many who completely disagree and insist that my problems were due to other issues. They may be partially right, and I cannot blame cycling itself, but I can pinpoint where in my process that I started neglecting my bones and urge others not to make the same mistakes.

It has become clear that I most likely had some bone density issues before beginning to ride. Some of this probably has to do with diet. My worst habit has been soda products, most of which are not good for bone strength. Even now I find it difficult to cut them out completely, although I drink a lot less than I used to. Calcium has not been a major staple of my diet either. I don’t handle milk well, and tend to avoid fattening and high calorie dairy products just to keep slim.

Weight bearing has also been an issue. Even though I’ve dabbled with running and walking, cycling has been my sport of choice for years. Since I have worked at an office job and gone to school for the last several years, I’ve been off my feet a lot.

During the few years of intense cycling, I barely ran or even walked. The extent of my weight bearing was occasional strength exercises, but even those were not appealing to me. I preferred to develop strength on the bike. Climbing probably puts a little more weight on the leg muscles, but most likely not the hip. Proper cycling form minimizes the use of the hip. The flexors are being used to spin the pedals, but the quads and glutes do the heavy lifting.

When I wasn’t riding, I was recovering. That meant sitting on the couch. Sometimes I would do active recovery with short, easy rides, but I was not adding any weight bearing. After a tough mountain century, I would generally stay on the couch for the better part of a few days.

I was shocked when I had a scan last year and found that I had osteopenia in my hips. In hindsight, given my habits and training practice, I should not have been so surprised.

A couple weeks ago, we had a re-scan. I expected the numbers to be a little worse because I had surgery this year and a lot of recovery time. I’ve been on the couch a lot more in the last year than maybe the previous five years combined. The initial numbers that they gave me were discouraging. It sounded like the hip had gotten worse. On top of that, I was actually in osteoporosis levels in my hip joint. After receiving that news, I wondered seriously if I would ever ride again. I had even drafted a post basically ending this website. I have not and will not publish that one, because as has been typical with this roller coaster injury, the news got better.

When comparing my scan from April of last year with the one from a couple weeks ago, it turns out that my hip bones have actually improved by about 15%. That is significant enough for me to be encouraged. The osteoporosis is in my actual hip joint, the same one that was operated on in January, and it is barely at the level. The test last year did not scan the hip joint. Why would they? So there was nothing to compare, but I’d say the odds are that that bone was weaker last year than it is now.

The picture becomes clearer. What have I done differently? I’ve eaten dairy products, and over the past couple months have tried to walk around as much as possible. Over time walking has become less painful, which might be due to the bones strengthening along with the injury healing. The weight bearing will continue, but for now, any riding, running or jumping will not, at least for a couple or few months until my bones strengthen. The good news is I’m almost guaranteed to ride again and likely at a high level, but I will have to do things differently.

This is where I encourage all cyclists to learn from me. Implementing some form of weight bearing is important. Eating a balanced diet is important. A lot of us hate running. I’ve had a love/hate relationship with it, but know that eventually it will be a necessary evil. Strength training isn’t my thing either, but it’ll also be necessary. That can be squats, leg presses, or even upper body exercises while standing. It is important that some time is spent on a weekly basis doing some sort of weight bearing.

Things are again looking better for me, and I’m keeping a positive attitude. As far as pain goes, I am feeling better than I have in two years, and I cannot begin to express how liberating that feeling is. I’m able to get out, explore, see and experience things. I’ve been to three concerts in the past three weeks. I hadn’t been to a concert in years prior to this summer. It’s good to get outside. The couch is a brutal prison. 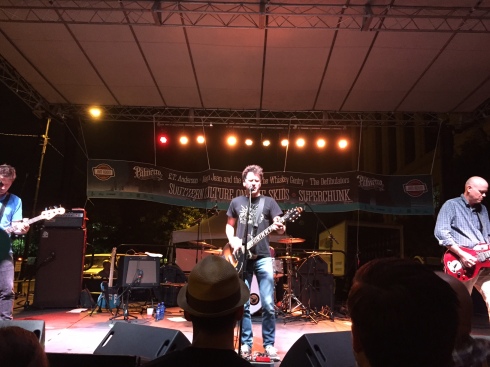 Standing near the front row for two hours felt amazing and not painful.

In the meantime, I’m going to keep walking and eating calcium. My doctor said that I shouldn’t worry about the calories, and that adding a few pounds would not be the worst thing. It might even help strengthen my bones by giving me more weight to bear. And I know I can lose it later. As I get more comfortable on my feet and finish up with some other priorities, I’m going to mix up my training regimen. The idea for now is to start P90X3 in December. That will give me upper body strength and hopefully will turn some of that fat into muscle. It may not be the lean, climbing body that I strove for last year, but it’ll still be a functional and healthy body. I’ll be careful with any of the flexibility and jumping exercises that interact with my hip, and I’ll probably start easy.

When I’m on the other side of that, the bike will be waiting for me. So will the sneakers, and so will the leg press machine. It’ll be about balance, but if I’m smart, I’ll climb higher and stronger than ever.

Like Loading...
This entry was posted on Sunday, October 12th, 2014 at 12:22 pm and posted in Injury, Recovery. You can follow any responses to this entry through the RSS 2.0 feed.
« Tunnel to Towers, Columbia, SC
The Ben That Inspired Us »

4 responses to “Them Bones”