Eve of ‘The Bridge’ 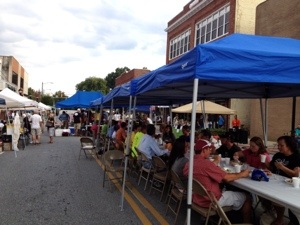 Today was preparation day. After a short road trip, I dropped by downtown Lenoir, grabbed my packet, checked into the hotel, then came back later for the free dinner.

Let me just say that a complimentary dinner really makes for a fantastic pre-ride atmosphere. Many of the big rides, even the ones with hundreds or thousands of riders, are practically a ghost town the evening before. People pick up their packets, then jet to their hotel rooms, and commence with their evenings. When there is a dinner, there is a little more festivity and camaraderie. People get to mingle, and get into the spirit of the event. Well done, Caldwell Chamber.

I was flying solo today, and halfway expected to see some familiar friendly faces. Instead I met a couple of new ones. I met a guy from St. Louis, MO, who is a RAGBRAI fiend. He is aiming to ride a century in every state, and prefers those with patches. He’s succeeded with more than half the country, and should get another patch for his jacket tomorrow. Interesting guy, with a cool and ambitious goal. He talked up RAGBRAI as a week-long pleasure party. I’ll have to head out there someday, although probably not for awhile.

People ate either inside Sweet-T’s restaurant, or outside in the street where a tiny street fair was going on. People were having a great time, smiles all around, and I exchanged pleasantries with many riders. A local musician played some nice, southern tunes to add the evening’s flavor.

I also want to give a shout to Luna Cycles, who put up a nice blog this morning, wishing the riders well, while recognizing the brutality of the event. This being my second year, I appreciated the kind words.

My number is clipped to my University of SC jersey. I’ll be wearing white from head to toe, including the bike. Say hello to me if you pass by, and I’m sure many of you will.

The forecast is now calling for some afternoon rain, all the more reason to ride faster. To all riders: cross your fingers, do an anti-rain dance, and Godspeed tomorrow.