A couple thousand of riders roll out in a stream as day breaks.

Over the past couple of weeks, I have been nursing a hip injury that threatened my participation in Six Gap Century, the last event of my season. After some good and bad days, I was pretty sure I would be able to ride.

When I woke up in the wee hours of Sunday morning, I could tell it would be a bad day. It was painful. I took some anti-inflammatory, and iced it for as long as I could. There was no time to waste worrying about my hips or anything else. I had to give it a shot with what I had.

After getting everything in order, it was time for the final test in the parking lot. Could I ride without pain? The toughest part was getting my leg over the bike. I had to stick it out, and tilt the bike under the leg. Still painful, but it worked. Once I was on, I could turn the pedals without much issue. That was fine for the parking lot, but I still had no idea how it would respond on the climbs.

The crowd was massive as we gathered near the entrance of Lumpkin County High School. The announcer asked people where they were from as they passed. There were a lot of Floridians, a few Europeans, and the rest from all over the place. One guy said Mars. Real funny, buddy.

The weather was cool as we attacked the rolling hills heading out of Dahlonega. These were a good first test for my hip. I was able to ride, but not nearly as strongly as usual. The fluid pedal stroke just wasn’t there. Sometimes I would inadvertently twitch the hip, and feel a little pain. I would groan, grit my teeth, and continue on.

The descents were the next big test, and they were even tougher. Since it was only my right hip that was bothering me, I could not lean into the turns in that direction. When the road curved to the right, I was like an petrified, upright stick moving ever so slightly to the left to guide my body. When we turned to the left, I was able to lean all the way, and soar through the turn.

I rode mostly with Jody, a friend from back home. He knew I was injured and was kind enough to stick with me. I knew early on that I was not riding as strong. I told him that he didn’t have to wait. He wouldn’t hear it. All I was doing was complaining about my hip, which he related to a sciatic problem he had endured. The company and conversation helped get me through. Appreciate that, Jody.

After 20 miles of rolling hills, we hit the first Gap of the day. It was Neel’s Gap, and was the perfect one to start out with. The climb is long, around six miles, but not terribly steep. It ranges from 4-6%, just enough to get my climbing legs going, and not too much to kill me.

However easy the climb was, that one hurt. I felt the hip most of the way up. Everyone passed me, including Jody. I tried not to focus on it, but that was impossible. About two thirds through the climb, it loosened up enough to give me some mobility. A guy passed me, and I stuck on his wheel like glue, riding up behind him the rest of the way up. Jody was waiting for me at the top.

The descent would be the real trick. I had heard that Neel’s had some technical sections. Could I handle them? I wasn’t sure. It was on this descent that I tinkered with my technique and learned to descend under the circumstances. I had to pull my hip in towards the bike, and contort my upper body into the turn. It probably looked awkward, but it worked.

The next climb was Jack’s Gap, which I had climbed before on my way to Brasstown Bald. It has some steep sections, which I was able to stand up and get over. The rest was rolling and not a problem. There was occasional pain, but I could deal with it. It was nice to reach the entrance to Brasstown Bald, look at the steep road up, and head past it.

Unicoi Gap was next. It was a little easier than I remembered, and fortunately not too long. I remembered how exhilarating the descent into Helen could be, so I gave it a go. I bombed down with confidence, passing a lot of people along the way. The leaning system continued to work.

The next Gap was THE challenge. Hogpen Gap. I had previously not thought it too terrible, but that was with fresh legs and a lot of conversation. The climb feels a lot different at mile 60 than it does at mile 6. 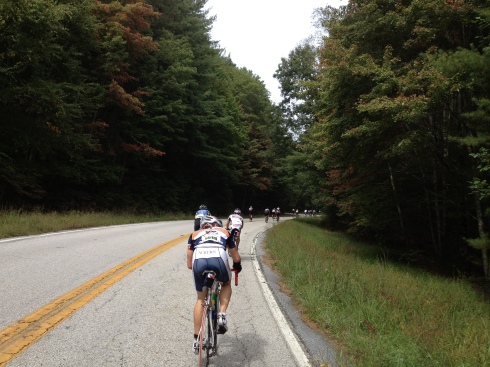 Here goes. We crossed the US Pro Challenge timing meter, and were officially on the clock (not that I paid much attention to it). The first steep section smacked me in the face. Ouch. Brutal. It hurt, and would continue. I stood up, and did surprisingly well given my situation. I was trying to wait for Jody, who fell a little behind, but slow pedaling is not easy on big grades. I stayed ahead of him until the top.

There’s an old joke that the best cure for a headache is getting a stubbed toe. That’s the same logic for what happened with me on Hogpen. Even though I was limping when I got off the bike, the climb hurt so much that I forgot about my hip. As much as I struggled during the climb, it directed my attention enough for me to finally get my legs back. When I got to the top, however tired, I was back to my old self. I had my mojo back.

After a hair-raising descent down the steeper side of Hogpen, the next task was Gap #5, Wolf Pen Gap. A few more rolling hills, a right turn, and we were there. As far as difficulty goes, this climb was on par with Neel’s Gap. It was a little steeper and a little shorter. For most of the climb, we were covered under a large canopy of trees. It reminded me a bit of Schull’s Mill, Chimney Rock, Walnut Creek, or Highway 80 climbs in North Carolina. It was a pleasantly scenic climb, which somewhat helped to distract from the difficulty. I rode with Jody again, who was having a little bit of trouble with this one. The tables were turned, and it was me waiting at the top.

That left Woody Gap. “Woody doesn’t really count,” we were told a couple times by other riders. The only thing it had in common with the other climbs was the word ‘Gap’ at the end of its name. Even though the climb is 1.5 miles, you only gain a few hundred feet. It seemed more like a couple steep hills rather than a long climb. After descending down the other side, I could tell that it would be far more challenging from the other side.

With the Six Gaps behind us, we rolled back towards Dahlonega. The hills seemed to go on forever. They were not too steep, but just kept coming and coming. We continually looked at our mileage and at landmarks for any sign that the ride was coming to an end. We were ready for this day to be over. Finally we descended the small hills on Black Mountain Road, and knew that the High School was nearby.

We crossed the finish line at just under eight hours, in 734th place according to the results. It was my slowest mountain century of the year, but I had a pretty good excuse this time. As Jody reminded me a few times throughout the ride, this was about finishing, not about beating a time.

A couple thousand of riders roll out in a stream as day breaks.

The rolling hills at the beginning were a killer.

This is Jody, my riding partner for the day, mugging at the camera.

I hung on that guy’s wheel the rest of the way up Neil’s Gap.

Still falling behind on Unicoi Gap.

Hogpen Gap had a KOM timer from the US Pro Cycling Challenge.

The picture doesn’t show steepness, but the body language does.

Hogpen has a lot of false summits.

Hogpen may have been brutal, but at least it was colorful.

Wolf Pen Gap was my kind of climb.

Dense foliage near the top of Wolf Pen Gap.

Whether it counted or not, Woody was the Last Gap.