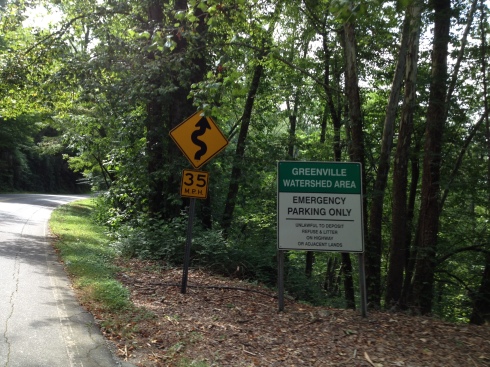 I love Tryon, NC. As long-time readers of the blog know, I’ve been here quite a few times. Of all the nearby hills, it is by far the most bang for the buck. More importantly, I just love it here. It did not take much convincing for me to sign up for the Fabulous 4th Bike Tour.

This one starts from Harmon Field in Tryon, does a small loop through Landrum and back, then heads through South Carolina, up Callahan Mountain and then the Watershed. It ends with a screaming descent down the Saluda Grade. This year’s ride was organized by Katie Malone, former director of the Assaults, and she did a fantastic job.

I am still in casual riding mode. I am not concerned with any sort of time or mileage per hour, just that I get a good workout and enjoy myself. My strategy has been to see how I feel, and let that dictate my ride.

After some minor mechanical issues, I started feeling a little frisky this morning. After a little back and forth, I settled into a relatively fast pack of maybe 15-20 riders, who I drafted with for around a dozen miles.

We were cruising along and the unthinkable happened. We were on a slight bank in the road, dodging some stray rocks on the road, when one rider turned at almost a 90 degree angle. He barreled off the road, flew off his bike and barely missed a tree. Holy smokes (that’s not what I really said!).

I flipped my bike around and was the first to see him. He was laying in a pile of bushes and was stone cold knocked out, but in a weird way. He was snoring, loudly! Yet this was not just any kind of snore. He was also hyperventilating. I wondered if he was in shock.

I was completely unprepared on how to handle this. I called 911 immediately. Fortunately a friend of his, Charles, came by and was able to lend a hand. Charles kept the rider, Brian, situated while I tried to talk to the emergency dispatch. The toughest part was figuring out where we were. A SAG motorcycle vehicle stopped by, and he was able to offer some assistance. Tomek from Epix Gear also stopped by and helped. A couple other riders also stopped.

As I was talking to the 911 operator, Brian started regaining consciousness. At first he was confused and wanted to get up. Charles kept him down, sometimes forcefully. After hearing he had been in a bike, the first question he asked what ‘What’d I hit?’ I was a few riders behind when the accident occurred and had a good view, but was not positive why his bike went left. I assumed he hit a rock or something, and explained as much.

Brian continued to try and get up. He was agitated, confused. He had some other medical conditions that were bothering him. He had a little bit of road rash and claimed that his knee and shoulder did not feel good, although it was pretty clear that there were no broken bones. Occasionally he would try to get up again, and Charles held him back. ‘What’d I hit?’ he asked again. He asked other questions repeatedly. He clearly had a concussion.

I was talking to the 911 Operator, while also talking to the people around that were trying to pinpoint our location, and also trying to help Charles keep Brian calm. I would answer his questions about what happened, albeit with less and less detail.

‘Do you hear an ambulance?’ the 911 Operator kept asking. Nope, nobody did. We kept waiting and keeping Brian as subdued as possible. All of a sudden, a ton of emergency vehicles showed up. There were ambulances and firetrucks from both NC and SC. After briefing them on what happened, we got out of the way and resumed our ride.

After having spent 30-40 minutes off the road tending to the accident, we were miles away from any pack. Tomek graciously offered to drive us closer, but we declined. It just wouldn’t feel right not riding the entire thing.

Fortunately a couple of my friends had stopped with me. We rode together and chatted. It was a nice, easy social ride in beautiful country. We caught up with some triathlete friends who I hardly get to ride with. We spent most of the time riding with them. We would pass them occasionally on climbs and always on descents, but we waited up.

The last 50 miles pale in comparison to what happened at mile 16. We just got lost in conversation as we maneuvered around the course. The roads were new to Team Schmitz, so I playing tour guide and enjoyed the scenic country through them.

Brian turned out to be okay. I saw him walking around at the end of the ride. I believe he had some road rash and a minor concussion. He got lucky.

The pack formed after a number of rolling hills.

The climb up Callahan, still steep.

The watershed is still a favorite climb of mine.