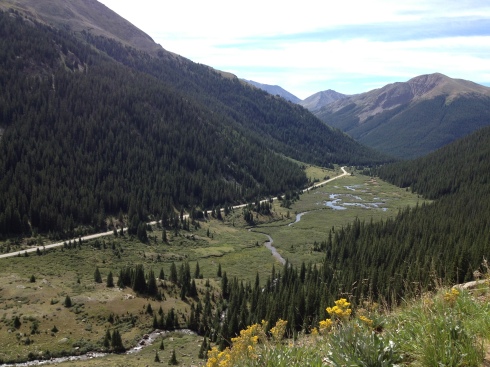 As of Friday, I had already climbed Mount Evans and three mountain passes in five days. It was a busy week, but somehow my legs stayed fresh. Usually with this much volume, I would have been exhausted. The only reason I can think of for my vitality is the fact that I have been riding easy on the climbs. For that I can thank both the altitude and the spirit of vacation. I’m in no hurry.

I had one more big climb in me before Copper Triangle. For my last solo ride, I wanted something big. I settled on Independence Pass, the second highest paved pass in the state (according to Cyclepass.com). I was partially inspired by a report that former baseball player Barry Bonds had climbed Independence Pass recently. I may not be able to slug 74 home runs in a season, but I sure can ride my bike up a hill.

I opted to start my climb from Twin Lakes, CO. It is a tiny town, not too far from Leadville, that sits in the shadow of Colorado’s two tallest mountains — Mount Elbert and Mount Massive. Independence would be long climb of approximately 17 miles where I would be gaining 3,000 feet of elevation.

The climbs starts out relatively easily. There are a handful of sections where the climb reaches 6%, while there are others where it is flat or a slight incline. This allowed me to get comfortable in my climbing legs, and warm up appropriately.  It was the perfect profile for my type of riding.

Like most of my climbing thus far in Colorado, the terrain was beautiful. At times I could make out the bald peak of Mount Elbert to my right, even if its base was obscured by smaller mountains or trees.

The route stays mostly straight for a long ways. I had heard that Independence had a twisty reputation, and assumed correctly that would be revealed later. After around 11-12 miles, I found myself in a valley with a slight incline. To my left, I could see a road rising along the cliff, going higher and higher. I would be up there before long.

The road curved left at just under the 13-mile point. It also turned upward, at a steady 5-6% grade. There was no barrier on the cliff edge, so as I climbed higher, it seemed like I was walking on air. The view below was not immediately apparent, so I stopped at the lookout where a few motorcyclists were already hanging.

Let me first clear up a misconception about motorcyclists. I’m sure there are some bad seeds here and there, but all of the riders I have encountered have been classy, respectful people. In a way we share a certain camaraderie since we appreciate nature on two wheels. These guys were very cool. We talked a lot about different rides we had done. It turned out we had climbed a number of the same southeastern hills. One guy even rode a bike, although he was too old to ride in the mountains (his words). They even offered me a bottle of water, which I declined because I had more than enough fluids.

As for the view, look at the cover photo. Breathtaking!

I rolled away on my own. The motorcyclists took their time and passed me after about a mile. I caught the picture below as they passed.

Waving goodbye to the motorcyclists. These were some good guys!

One thing the motorcyclists told me was that the climb would get steeper. That wasn’t entirely true, because it still topped out at about 6%, but the climbing was more consistent. There were not many more of the false flats that I had already enjoyed.

Do I need to talk about the scenery? It was just as gorgeous as all the other rides, if not more so. I’ll let the pictures do the talking.

Regardless how steep, a climb as long as this one becomes a grind. At some point I focus on just powering my way to the top. With that in mind, I was glad to get some levity from none other than Jens Voight, or the ‘Jensie,’ as he is called. Someone had written his trademark saying — “Shut up legs!” on the road. With maybe a mile or two remaining in the climb, I heard the message loud and clear. Yes, shut up legs. I am going to the top. I surprised myself by laughing out loud. Jens has a unique ability to put a smile on my face, regardless of the situation.

Soon enough, and I had reached the peak at 12,095 feet. That would be the second highest elevation I would reach on this trip, next to Mount Evans the previous Sunday.

I was taking the usual picture of my bike next to the elevation sign when a tourist stopped me.

Sure! I gave him the camera, then almost on impulse, I grabbed the bike and thrust it high in the air. I’d say the picture came out well.

The descent was hair raising near the beginning, as expected. I was careful around the curves. The big ledge where I had rested with the motorcyclists was the most unnerving because the ledge was right up against the road. I found myself drifting almost all the way into the other lane, wanting to stay as far away from that ledge as possible.

As I descended the rest of the way, I reflected on the magnificent week. Never did I expect to reach such heights in such a short time. It may sound silly or egotistical to say that I was inspired by my accomplishments, but I was, and my reflection was somewhat emotional. I proved to myself that there are no limits to achievement. I vowed then to continue setting ambitious goals, and try to accomplish what does not seem possible. More importantly, I won’t stop until I get there.

I started the ride just under the tallest mountain in NC.

Early on in the ride I could see Mt Elbert, but couldn’t quite capture the peak in a pic.

The lower, easier half of Independence Pass.

There were a lot of easy straightaways in the early going.

The first curve, about 12 miles into the ride.

Climbing the ledge up to Independence Pass.

Still climbing the ledge, could make out the motorcyclists at the lookout.

The view from the ledge.

View from the other side.

Waving goodbye to the motorcyclists. These were some good guys!

My climb would end somewhere up there.

No guard rails around here. Nothing but flowers to break my fall.

Climbing the upper half of Independence Pass.

Shut up legs! I hear you loud and clear, Jens!

I can see the summit way up there. Getting close.

I could see the road I had climbed from the lookout.

Another view from the top.