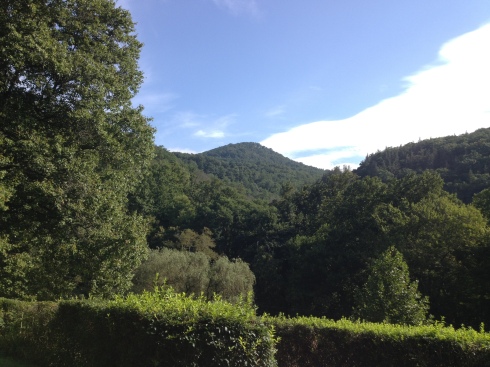 Three day weekends are awesome, and even better when they are capped with a wonderful day of riding in the mountains. This Labor Day was the inaugural Tour d’Apple ride, coming at the tail end of the Apple Festival. Several hundred riders converged to tackle a metric or full century around Hendersonville, NC.

All new rides experience growing pains. Mistakes are going to be made. In my opinion, the difference between success and failure is learning from those mistakes, and making adjustments the following year. Just about everything was perfect –- plenty of volunteers, rest stops, and a gorgeous route. However, the main issues had to do with road markings and directions. There was a lot of confusion about where we should be going. I’ve already reached out to the organizers, and they are going to make this their focus for next year. Going forward, I expect this to be one of the top rides in the area.

I began the day feeling good, but not wanting to push my injury too hard. I rode with Berry, a friend from home. His pace is not the same as mine, and he joked that he was my ‘anchor.’ He was protecting me from myself. We would ride together in between the climbs, and then climb at our own pace. I would usually wait for him at the top.

The first major climb was up to Sugarloaf Mountain. It started out gradually, up Lamb Mountain Rd, and then steeply pitched back up after a short descent. The last several hundred feet were a double digit grade, a good test of the legs early in the morning.

Mine responded. I could tell already that this was going to be one of my better climbing days. I waited for Berry at the top. It wasn’t his day, and he was already considering switching to the metric route. Since the routes didn’t converge until after Bearwallow Mountain, I convinced him to finish that climb before making a decision. Sometimes it takes a little longer to warm up.

After some marking confusion, we found our way to Bearwallow Mountain. I may be in the minority, but I really liked this climb. It was quiet, with heavy foliage and a lot of scenery on the way up. The grade was mostly manageable, with a steep section midway through that gets up to 12-13%. Again, I was feeling good throughout this climb. The legs were fresh and flexible. I was still careful not to open it up, and climbed at a comfortable pace. 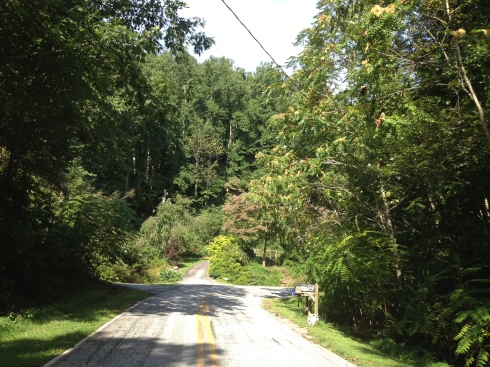 When I bumped into Berry, I found that he wasn’t as fond of Bearwallow. The moment he saw me, he uttered one word – “Metric!”

We lost each other on the descent and I waited at the rest stop. And waited. And waited some more. I was starting to get worried. I sent him a text. No response. After waiting a bit longer, I had to go. There was a cutoff time, after all. I found out later that he simply took a wrong turn. His metric ended with 70 miles.

As I rolled through Hendersonville, reality struck. Since I had spent a considerable amount of time off the road, I was well behind the pack. I encountered a group, but I was a little stronger than them. It wouldn’t work to ride together. It looked like I was going to ride the next 60 miles on my own. It turned out to be only the next 20.

The route took us through Hendersonville. From there we traveled through familiar roads. We went down Mine Gap, and zoomed through Zirconia and Tuxedo, to the base of Pinnacle Mountain.

Ugh. Pinnacle Mountain, my nemesis. It has been nearly a year and a half since I last encountered that beast, but I had not forgotten her. I was not looking forward to climbing her again. The cue sheet was not clear which part of Pinnacle we’d be riding. I was just hoping that it would not be the 25% grade.

The climb up there was via Cabin Creek Rd. Just like Bearwallow, it was mostly mild save for a steep section. It totaled four miles, a little longer than I expected. My strength started to wane, possibly because I had been riding for 60 miles by myself, and possibly because the sun out and the temperature was rising. I found myself thirsty towards the end, and grunted through the last mile or so. When I reached Pinnacle Mountain, I was thrilled to turn right.

Guzzling a couple Gatorades at the rest stop got me refueled and refreshed, and I felt strong again for the remainder of the ride. The best news was that a small pack of riders caught me. It was there that I met Laurie from Charlotte, whom I soon found was riding at about the same pace. She had accidentally missed the Bearwallow turn earlier, and added six miles to her ride. We were both behind the big groups, and made for fitting riding partners.

We descended Pinnacle Mountain through Sky Top Orchard, rode through Flat Rock and by the Carl Sandburg Home, before making way to the final climb – Jump Off Rock. This was the climb I was looking forward to the most, but we took an unusual way to get to it. Rather than going straight up Laurel Parkway, we took some side roads that went up and down. Again, the markings were precarious. I had to pull out my iPhone and say: “Siri, give me directions to Jump Off Rock.” I would hear the turn-by-turn instructions as I rode along, which gave me confidence we were heading in the right direction.

When we reached the top, we were surprised it was so desolate. Where were all the riders? Were we that far behind everybody? Not at all. We found out later that most people had missed the turn to get there, and had inadvertently skipped it altogether. Laurie and I ended up with more than 100 miles, whereas most others had somewhere around 95.

The descent back down to Hendersonville was a rush, not too steep, just right. Laurie was tired, having already ridden a century by that point. To her, the ride seemed never-ending. Still feeling strong, I took some extra pulls towards the end.

Despite the hiccups, this was a terrific ride. We encountered apple orchards and scenic mountain vistas all day. I’m confident the organizers will iron out the details and make this a ride to remember. I will look forward to coming back.

Riders smiling on the last pitch of Sugarloaf.

A view of Bearwallow from below.

Laurie climbing to Jump Off Rock

Near the end of the Jump Off Rock climb.

An empty Jump Off Rock.