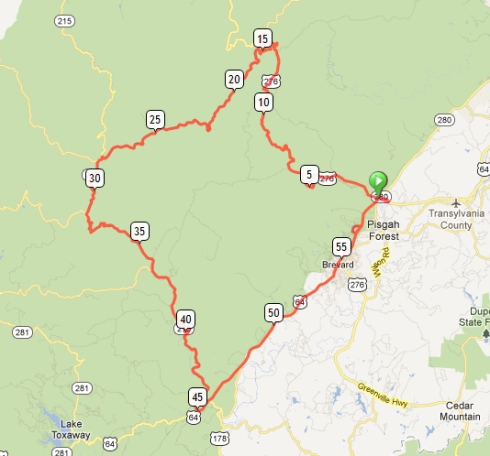 A lot of the stuff I add to the website are things that I would want for myself. For example, my Climbs section was started because I was spending a lot of time looking for interesting roads to climb when training for my first Mitchell. It grew from there.

The Routes section came from the same place. When I am in the Blue Ridge area, I often don’t have time to seek out group rides to show me around. I am always looking for convenient routes that I can take by myself. I find a lot of them on the internet, and some I make for myself. It would have been amazing had there been a single resource where I could find them all. If I cannot find it, why not create it?

This section was conceived a few months ago when I was training for my second Mitchell. It would have been too time consuming to put together a list of cue sheets like the Blue Ridge Bicycle Club has done to perfection. Instead I decided to use newer technology and use RideWithGPS links. Because people all over use this software, the content is vast and limitless. It also allows people to view the route on a map, see the elevation profile, and download it to their GPS device.

To begin, I asked a few friends if I could use theirs. Special thanks go to Neil Turner, Michael Powell, Scott Baker, John McSwain, and Jeff Dilcher for providing a starting point.

As of right now, we have routes that begin in Spartanburg, North Greenville, Brevard, Sylva, Tryon, Atlanta, and the North Georgia Mountains. In time we will add plenty more.

I am looking for a good source of content for routes out all over the Southeast, but I would specifically like to find some from Asheville, Boone, and Roanoke. If you know of anyone who creates these for your town, please send them my way.

Keep an eye on this section as I expect it to grow. Keep in mind that there is danger in undertaking any of these routes. You’ll notice a disclaimer on every page for a reason. Do your research and make sure you are equipped before trying these. While some are easy, others are epic rides that few people can accomplish on their own. 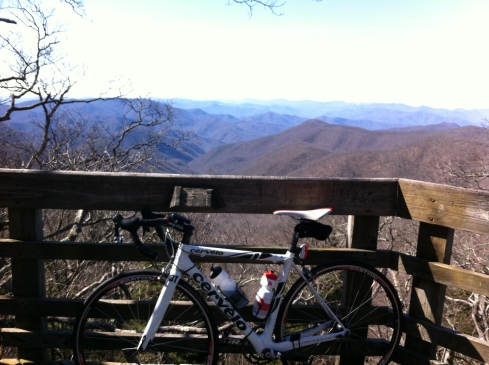 After conquering a Southern Sixer the day before, I found myself with a couple hours to kill and decided to take a stab at another. Richland Balsam Mountain, along the Blue Ridge Parkway, was literally in the back yard of my hotel.

I had already been there on the Blue Ridge Breakaway route, which went along Lake Logan Road near Cold Mountain (another Southern Sixer). We had descended down from that point and then climbed back up Waterrock Knob on the other side. This time I would climb up hard way, the same 12-miles I had descend the first time. Since I needed to get back home later that afternoon, all I could manage would be an out-and-back route, but that was fine. My legs were a little cooked anyway.

I parked at the bottom of the climb near Balsam Gap on the Blue Ridge Parkway and immediately started the climb. Without the opportunity to warm up, my legs were a little stiff out of the gates. I found my hamstrings to be especially sore in the early going. What made it more difficult is that the first four miles of this climb are the steepest, averaging a 7% grade. It was quite the chore on cold legs.

I knew right away that this would not be a hammering ride. I was as much cyclist today as I was tourist and photographer. I stopped often along the way up. This was mostly to take in the sights on such a beautiful day. The first time in this area everything just blurred by as I screamed down the mountain. It was nice to stop smell the flowers this time (not that there were many flowers in early March). I got a picture at every overlook on the way up, some of which you can see in the gallery below.

My legs came back about mid-way. This was probably mostly due to the climb easing up. In the first four miles I had climbed close to 1,500 feet and the last eight climbed another 1,500. My leisurely pace continued. I saw that there was a forest near the top named after Senator Roy Taylor, and a nice overlook a little off the beaten path that I would have otherwise not noticed. These are the things you miss when you don’t stop.

Finally I reached the top. There were a couple other people marveling at the “Highest Point on Parkway” sign. They were nice folks and even took a picture of me with the sign (didn’t come out well). When they saw me they said, incredulously “dang, did you ride your bike up that whole thing?” Sure did.

The descent was just as fun as I remembered it from last September, albeit not quite as colorful. I had forgotten about the tunnel and had to stop, pull out my phone and use that to nervously guide my way through the pitch dark. I’ll have to make it a point to invest in better lights later this year.

The 12-miles flew by. I saw my car parked at the overlook and was disappointed. The descent ended there and I wasn’t about to climb back up. I’ll get to experience it again.