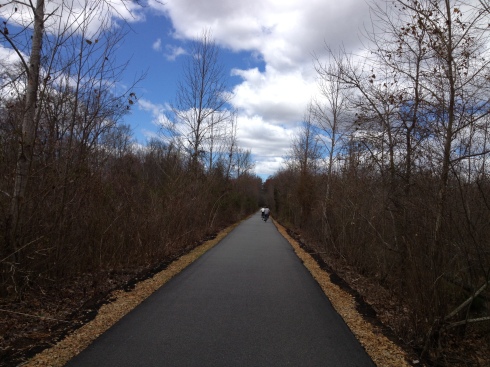 With a couple free days in the upstate, I needed a ride that would be interesting, and not so strenuous that it would impact my injury. Day one was washed out completely, leaving Friday as my only opportunity for some riding.

I chose the Swamp Rabbit Trail for a few reasons. First of all, I have been on the trail before, but always as a way to get somewhere else (like Paris Mountain). It is flat and pleasant, and it takes you from the heart of Greenville to the outskirts at Traveler’s Rest. Because of obstacles like road crossings, bridges, tight turns, runners and plodding mountain bikers, you really cannot get any amount of speed. On top of all that, the trail makes Greenville stand out as a southeastern cycling community, and I wanted to pay tribute by experiencing it all for myself.

I parked not too far from the Greenville Zoo to begin my journey, not realizing that this and downtown would be the most crowded sections. I navigated through the dog walkers and sightseers near the zoo, and entered the confusing downtown district area of Falls Park. This was great for warming up because no matter how much I wanted, I could not go fast. It was also frustrating because I wanted to get around everyone. There were lots of starts and stops.

The trails are tough to follow through downtown, and I missed a couple of them en route to the northern Swamp Rabbit Trail. Finally I picked it back up and began the trek toward Traveler’s Rest. The northern part was not nearly as crowded, and I was able to get a little speed. There were only the occasional walker and slow biker that I had to maneuver around.

While the trail is mostly flat, heading northbound is ever so slightly uphill. We are talking modest grades of 1-2%. They were made a little more difficult on this day because of a 10 mph headwind. That was enough to get the heart rate going and make this a challenging, if not overwhelming section.

As I approached Traveler’s Rest, I could see Paris Mountain in the horizon. It was tempting. I was feeling good, and the injury was not bothering me. Moreover, I had the itch to push harder. That’s the itch that I shouldn’t be scratching. As I headed north, I shelved the idea of climbing the mountain, at least going in this direction. I would head to the end of the trail and decide when I came back.

This marks near the end of the north trail.

The trail ends unceremoniously just north of Traveler’s Rest. According to the mile markers, there are more than 20 miles of trail remaining, but apparently they are not yet paved. They will be pretty cool when (if?) they are finished, as I imagine they would drop you off not far from Caesar’s Head Mountain.

As I made my way south, my pace picked up because of the slight descent, and I had a tailwind at my back. My heart rate dropped, and I was able to appreciate the sights. This felt like coasting. No complaints.

Paris Mountain beckoned again. I was still tempted, but decided against it. When I’m in climbing shape, I’ll make up by riding up both sides. Next time.

After buzzing through Greenville’s industrial and commercial district, I was back in downtown. Now the sun was shining bright and the tourists had multiplied. My BSG kit stood out among the polo shirts, khaki shorts and cameras. Again, I just wanted to get by. There was one instance where I had to walk my bike down a steep grade because of the throng of pedestrians in front of me. That part hurt. Eventually I made it through, and was back to the zoo area.

Now south of the city, I had just a little bit of trail left to navigate. I came across the Hincapie Path. That was cool. Did he donate, or just lend his name? I’m not sure. 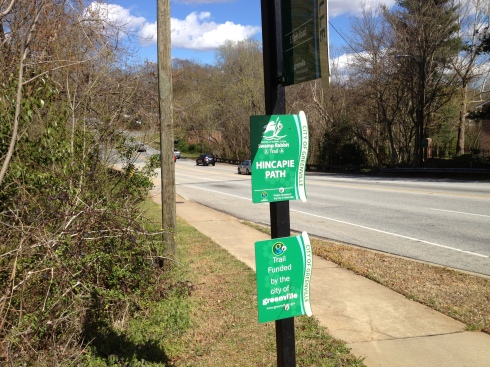 Hincapie path is a short section of the southbound trail.

Once past the zoo and the dog park, the south trail was not as congested. In fact, it was often desolate. I was able to lay down the hammer yet again, obstructed only by the winding trail that often would bank along the road, and sometimes share space with sidewalk.

As the trail passed by Greenville Technical College, I was surprised to see a few hills. These were nothing compared to Paris Mountain, but they were enough to give me a little test. I noticed one of them had a 6% grade, nothing fierce, and the hill at the very end of the trail was at 10%. Steep grades are still a challenge for me at this stage of my training, but I’m going to have to get used to them.

The trail ended again without warning, this time at a busy intersection. As I made my way back, I realized that this was actually quite a ride. By the end, I had 31 miles, and felt pretty amazing.

Well done, Greenville. I hope the community continues to embrace the trail, and that it can be developed further. I’ll definitely be back.

Most of northbound is slightly uphill.

This marks near the end of the north trail.

Hincapie path is a short section of the southbound trail.

The park follows this stream over a waterfall.

The other side of Falls Park, downtown Greenville.

Like Loading...
This entry was posted on Saturday, April 6th, 2013 at 1:44 pm and tagged with cycling, Greenville, greenville zoo, hincapie, nature, Paris mountain, recovery, swamp rabbit, trail, travelers rest and posted in Blog. You can follow any responses to this entry through the RSS 2.0 feed.
« Start Me Up
Time for Me to Climb »