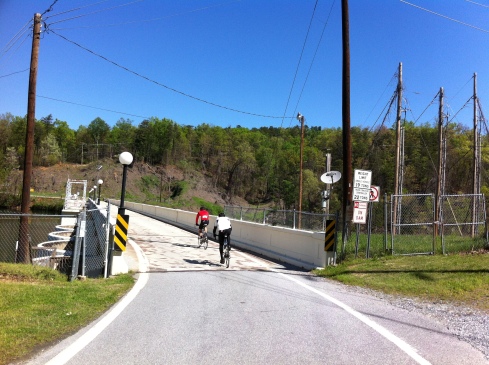 Of all the Spring events in which I have participated, Tour de Lure may be the best measure of how one will do on Mount Mitchell. For that, I consider it an essential training ride and I’m glad to decided to give it a try.

The ride starts out of the YMCA in hilly Marion, NC, sitting at the base of the Black Mountains that shadow the town from above. For this venture we would stay away from the large mountains and instead ride around the rolling terrain of the foothills. The long route of 70 miles is difficult and has plenty of climbing, but only one real climb of length.

The rolling hills of Marion were easily the toughest. I had forgotten my Garmin (oops), but am guessing that many of the grades reached the teens. We navigated the grunt hills and steep descents out of the city and then made our way towards the western bank of the lake.

Once out of Marion, the difficult hills subsided and we were able to maintain a decent pace. I found a pack of around 15 riders to work with. There would be a little bit of separation on the hills, but for the most part we were able to stay together until the first climb.

The big climb is called Stone Mountain for unknown reasons. The Stone Mountain in NC that I am familiar with is far away. Many of the mountains in this area have cliff-like, rocky summits (most notably Chimney Rock), which may be how it earned this name.

The climb started out at a gradual grade. Someone asked me near the beginning whether we were on the climb. I was lost without my Garmin and said I wasn’t sure, but believed it was somewhere around this mileage. The road pitched up and the climb became a little more difficult. A few miles later I joked with him by saying that “I guess this is the climb!” For a category three climb, this one was mild. It reminded me a lot of Schull’s Mill Road near Boone in difficulty if not scenery. There wasn’t much to look at other than trees and there wasn’t a view at the summit. It was just a slow ride to the top and then a fast descent.

Nature called and I had to stop at the rest stop after the climb, which meant I lost my group. That turned out to be a blessing in disguise. After riding solo for awhile, I turned a corner and found myself in a mountain paradise. The route took us through the heart of the scenic towns of Bat Cave, Chimney Rock and Lake Lure. We traveled through the lake valley surrounded by these stony monoliths on all sides, with mountain-blue Lake Lure on the left side of the road and Broad River flowing over rocks on the right side. The Chimney Rock structure was the most notable and imposing of the mountain stuctures, but they were all beautiful. I found myself transfixed by the sights and almost forgot to watch the road. From here I took a couple breaks for photo ops (most of which didn’t come out well) and took my time. I was a tourist and in no hurry whatsoever.

The route circumnavigated the lake’s south shore to the glorious western shore. From here we followed Buffalo Shoals Road, a windy labyrinth that hugged the edge of the lake. There were easy rolling hills here, nothing too strenuous. The one obstacle here was gravel, lots of it. I had to be careful to ignore the lake and focus on the road to avoid the gravel, especially during the windy and downhill sections.

Next came the return route to Marion, which happened to mimic much of the Assault on Mount Mitchell route. We turned onto Bill’s Creek Road. I kept expecting to encounter Bill’s Hill, but apparently we started just north of it. That wasn’t much of a break, as there were plenty of other hills to deal with. After Bill’s area, the big hills stopped for awhile until we came within reach of Marion, when they returned tougher than ever. I remember from last year that some of them reached the 10% range. When we turned from the Mitchell route and headed back towards the YMCA, they became even steeper. The last few I just barely grunted through, and frankly, I was relieved to finally turn into the YMCA.

My finishing time was around 4:15, which is not bad considering I was nursing an injury and did not approach this one aggressively. This bodes well for my Mitchell performance, which I will talk about more in another post.

We gathered at the YMCA and prepared to ride.

My riding companions for the first 25 miles.

Near the top of Stone Mountain. There would be no summit view.

One of many glorious mountain views. Pictures don’t do them justice.

The Broad River flowed on the opposite side of the lake.

I stopped by to get a picture from of Chimney Rock from the park entrance.

View from the bridge while riding across.

Like Loading...
This entry was posted on Sunday, April 8th, 2012 at 12:12 pm and tagged with bat cave, chimney rock, cycling, foothills, lake lure, marion, mitchell training and posted in Rides. You can follow any responses to this entry through the RSS 2.0 feed.
« A Slight Setback
The Aftermath of Lake Lure »