The plans were up in the air again this week. The coastal ride I had registered for was canceled because of Tropical Storm Andrea, which had passed through later in the week. That left me with Plan B (actually Plan A, long story) heading back up to Charlotte to participate in the Assault on Morrow Mountain series.

This isn’t a cookie ride, but instead a “Show & Go” ride, overseen by Jeff Viscount, the Mayor of Biketown. The cost to ride is a mere dollar, and only the first 200 riders will be permitted access to Morrow Mountain State Park. Typically crowds are around 250, with the max at around 400. We had a much smaller number on Saturday, with most people sufficiently scared off by the weather.

Speaking of which, it was iffy that this ride would even happen. The tropical storm had come and gone, but there was another system that threatened to ruin our day. Most of the rain passed through overnight, and Jeff gave the all clear. We started with some damp roads, but at least we had (mostly) dry helmets.

As we lined up, I looked to Wade, who had invited me. ‘Is this more of a casual ride or a hammerfest?’ I asked. He pointed to a team of anxious riders, lined up in matching green jerseys. ‘Oh yeah, people like to hammer. You can try to keep up with them, but I’ll be riding in the back.”

My host, Wade, at the starting line.

As the ride started, I found myself with the front group. I was able to hang on without much issue as we sped down the mostly downhill, easier riding in the beginning. With some standing water on the ground, I was a nervous descender, and found myself uncomfortable in such a big group. After the 10-mile point, I was more apprehensive than the rest of the group at an intersection, and got dropped crossing the highway. That was just as well.

I wasn’t the only dangler. I hooked up with Steve from Fort Mill and we rode as a twosome for a number of miles. We rode up Chicken S**t Hill together (named for the smell, which was pleasantly absent that day). After nearly puking up my breakfast (warning: don’t have Bojangles before a ride), we latched onto another group of around eight. We rode with them the rest of the way to the state park.

Riders have two options to ride up the mountain. They can descend another two miles to the base, and climb the 3+ miles to the top, or just climb the upper half. Having driven all the way here, I was going to get my gas money worth. I descended with my group to the boat launching platform, then turned around and climbed back up.

I was feeling pretty good by this point. Since I had legs and Morrow Mountain is not the toughest climb in the world, I decided to attack it — something I haven’t really done with any climb since the injury.

The climb begins easily enough, with low grades that can be powered through in the big ring. As we get towards the turnoff, the road turns up a little bit to around 10%, before dipping slightly. I huffed and puffed up the steeper grade, then kicked it up a notch for the flat. As I veered into the park, Jeff shouted “He’s flying!”.

There’s one steep section of Morrow Mountain that gave me some fits. Not far from the top, the road turns up and stays at around a 13-14% grade for several hundred feet. That took some of the wind out of my sails, as my body still doesn’t handle the steep stuff that well. I gave it all I had, and arrived at the top breathing heavily with a heart rate above 180. 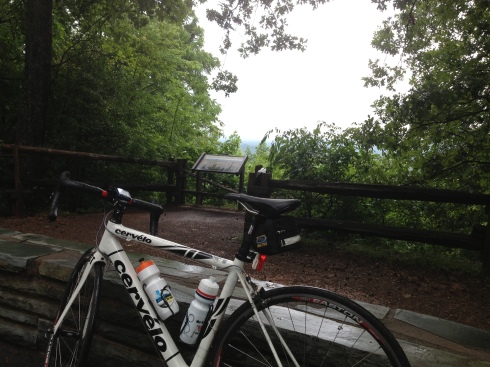 I would be disappointed when I saw my results later, but at least I pushed. It’ll take awhile to get back into climbing shape.

We had heavy cloud cover as we were climbing up the mountain, and a few drops of rain. I understand it is usually scenic at the top. It wasn’t bad today, but I’m sure it would be gorgeous on a clear day. I guess this means I’ll be coming back.

The mountain split up most of the groups, and the way back was considerably tougher, with plenty of big, steep hills. I was spent from the mountain and hadn’t eaten enough (see above: stomach troubles). I fell in with two ladies, who dropped me on a steep climb. After a number of miles riding solo, I fell in with another pair, who I hung with until about a mile to go, coasting into the parking lots by my lonesome.

All in all, it was a blast of a ride, on quiet, smoothly paved, country roads. I cannot thank Jeff enough for all that he does for the cycling community. Also thanks to Michael Hernandez for being our photographer for the day. You can see a lot of his images at The Good Ride’s Facebook page.

My host, Wade, at the starting line.

Rolling out to begin the ride.

Nasty cloud cover ahead for the climb.

The boat ramp is where the climb begins.

The cloudy view from the top of Morrow was still gorgeous.

Rode with this pair on the way back in.

Like Loading...
This entry was posted on Sunday, June 9th, 2013 at 9:03 am and tagged with charlotte, cycling, morrow mountain, weekly rides and posted in Climbs, Rides. You can follow any responses to this entry through the RSS 2.0 feed.
« Bones, Hips & Harmony
Summer Weekend Wars »